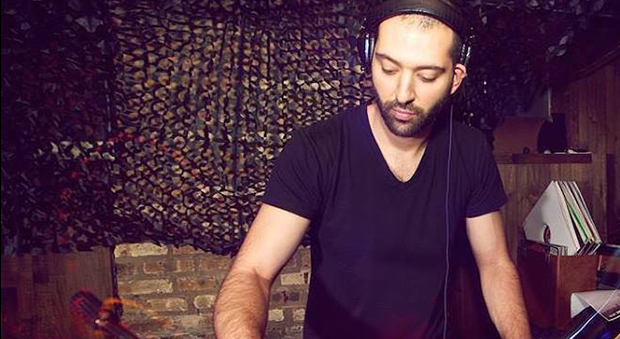 The Pool House record label and collective co-founder and Spybar resident, Ricky Bisharat, or simply known as Bisharat, comes to us straight out of the Windy City.

Going into year-two of running The Pool House, Bisharat is gearing up to drop the 35th release on the imprint produced by himself entitled Resolutions EP in July. As one of Chicago’s movers-and-shakers within the house music community, he’s curated numerous events throughout the city at such prominent nightclubs as Spybar and Primary–recently opening up for Stephan Bodzin and Gene Farris. Bisharat’s distinct reputation and networking prowess has also landed him gigs at Verboten in NYC and Do Not Sit On The Furniture in Miami; not to mention hot Chicago festivals Mamby On The Beach and North Coast Festival.

We’re grateful the talented Chicago native found the time to compose this all-vinyl mix for us. Read more about Ricky Bisharat in the interview below.

How did you get into dance music and DJing? Do you remember a specific moment of inspiration or was it an evolution?
House music specifically was introduced to me through an old friend who would spin records at his place after a long day of skateboarding. We would ditch class, skate, and he would jam out and tell me stories about his favorite Chicago artists. It grew on me from there. DJing was more of an evolution. Early on my brother had equipment that I would mess with, and once I had enough money for my own, I made a big purchase and practiced everyday.

How does running your label The Pool House help you progress as a DJ?
I would say it has helped me by opening up doors to meet and work with other artists I have respect for. It’s also a great outlet for my own personal music.

What’s the scene like in Chicago? How is it unique compared to the rest of the world?
I can’t say I have much experience outside of Chicago for a good comparison, but I played in New York and Miami recently and they were memorable nights. I’m anxious to know what its like to tour Europe. There’s a lot going on in Chicago’s music scene, especially with afterparties. I would say the scene is very much alive, especially with summer now here. In these past couple years, it seems like you can find a taste of any genre you prefer on the weekends.

Name a couple core values you hold as a DJ?
I’m a real stickler about beat matching. It’s hard for me to appreciate artists that take the easy road in their careers just to perform in the publics’ eye. Resident Advisor wrote an article about this titled “DJing shouldn’t be easy” which is a great read. I believe you should practice until you’re ready. I remember when I told myself that I would become a vinyl DJ just to prove to myself that I belong with my idols. More core values would be that I like to help artists on my label succeed from their hard work, and honesty and loyalty is everything.

Which way do you lean towards — 115 or 125? What’s one of your favorite jams you’re playing out at the moment?
Its all about 117-120 for me. Ummm I really like Verrina & Ventura records. I have a good amount of them and they all sound great.

What gig do you dream about?
After watching some videos from Sunwaves Festival in Romania, I think that would be pretty amazing

What cool things do you have planned for 2016?
We have some dope new artists releasing on the label that I’m excited about, I’m curating a couple new events for the summer in Chicago, and we’re launching 2 new sub labels this year as well

Tell us about your mix…
Its all vinyl featuring some of my favorite records from the past couple years. It’s all mixed through my favorite mixer as well  (Rane MP2015)