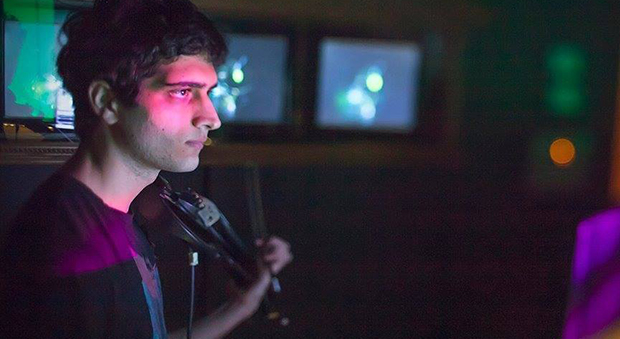 This week’s Hometown Heroes is coming in hot from a young and talented Boston-based musician who’s writing Techno with an iPhone and a violin.

Metal-head turned Techno-junkie, Ehsan Akbari aka Beartrax is a musical shape-shifter. From a rigid background in classical violin, to being the frontman of a heavy metal band, to now producing dance music–the North Carolina native knows no boundaries.

Beartrax’s recent involvement in the thriving Boston scene is inspiring–cranking out unique tunes and projects for the ears of his captivated listeners. Keep an eye on this rising producer making moves with no sign of slowing-up anytime soon.

How is the Boston scene these days?
Boston’s at a nice point right now.  There’s a good group of producers collaborating and sending tracks back and forth–it’s been nice to learn from and work with some very talented people here.  There are always some fun parties going on and good djs coming to town as well; not to mention there are lots of cool local bands that play in a variety of venues throughout the city.  Overall, there’s a good community here and it’s cool to see artists, labels and parties pushing the scene forward.

When did you start going out to club nights and parties there?
I started going out 2 years ago when I moved here from Charlotte, North Carolina to attend law school at Boston College. It’s provided a good balance with law school, and I’m fortunate to have a good crew of friends who I hang out and go to parties with here.

How did your musical obsession begin? When did you start playing violin?
I started taking violin lessons 18 years ago when I was 7, and played in orchestras throughout middle school. In high school I started playing electric violin in jazz band, which I continued throughout college as well.  I also started a metal band in college where I was the vocalist and played bass, and started djing and producing in my last year of college.  I’ve transitioned between a lot of different styles of music and it’s been fun to have experimented with so many different instruments and modes of musical expression.

Where did the name Beartrax come from?
It came from a nickname my high school and college Cross Country and Track teams came up with that basically evolved from my last name “Akbari,” which eventually just turned into “Bear.”  When I told one of my teammates I was starting to dj and produce he jokingly suggested my moniker be “Beartrax.”  I liked it and just decided to go with it from there.

Have you been collaborating with any other prodcuers in Boston?
As I mentioned, there’s been a good group of producers I’ve met over the last year or so here who’ve been exchanging tunes, giving each other feedback, and collaborating.  I recently had a collaboration I did with another producer here, After Touch, released on Union Jack Records, and we have more tunes in the works as well.  I’ve also been working on new music with a very talented duo here, Smeed & Suspence; and also plan on getting in the studio soon with another producer and fellow metal-head, Johnny Vaz, who has some good releases out as well. Overall there’s a good crew of guys here who are all exchanging ideas, learning and excited to make music.

When did you start DJing?
I studied abroad in Paris 4 years ago and was fortunate to stumble upon a Minus label night at the Rex Club not having known what techno or house were at the moment; I was instantly hooked by the dark nature of the music, which felt like a more refined version of the dark, aggressive heavy metal I was playing and making at the time. I was also fascinated by the performance possibilities that Ableton offered, and I instantly got a copy of it when I got back home to America and started producing right away.  It wasn’t until 2012 when I started DJing, and I started doing a hybrid live set with my electric violin and midi keyboard last year, which is my current setup.

What producers are you into at the moment?
I’m liking a lot of the musical, groovy, driving music that’s being released at the moment. Barem, Kiki, Clarian, Subb-An, Oliver Schories, and La Fleur have all been regularly putting out music that I enjoy, and I will always love anything that Extrawelt put out.

How did you transition from Heavy Metal to House & Techno?
There’s a common thread between all of the music I like, whether it’s classical music, 90s Swedish Melodic Death Metal, or German Techno – I love music that has aggression, dark melodies, tension, drama, atmosphere, and moodiness.  As I mentioned, when I discovered techno I was attracted to its dark, refined nature which had a lot of similarities with regards to the feeling heavy metal gave me.  I was ultimately eager to explore the possibilities that Ableton gives you to be a one-man band and incorporate my musical background into production and performance.

Where do you find your inspiration to write music?
I’m mostly inspired by melodies, whether it’s from techno, metal, punk, etc.  I listen to a lot of different bands and artists and am constantly jotting down songs with melodies that grab me in my iPhone, which I revisit later and start to build chord progressions and melodies around when I start new songs.  I think the most important thing for any producer is to figure out their own identity and what kind of music they were into before they started djing and producing and stay true to their roots and instincts based on that; I think that making music is mainly a combination of instinct and having some kind of formula/structure that gives you a chance to capture those sparks of creativity and then build on them throughout the editing/arrangement process.  For me, sometimes that means starting out with a melody that grabbed me from a 1995 In Flames song. On top of experimenting with my violin in my productions, I’ve also started recording some friends who play different instruments in order to add some more instruments and melodies into the mix, including my friend who plays electric cello, as well as one of the guitarists from my old metal band.

Do you have any projects in the works that we should know about?
I have a couple of releases coming up later this month, both of which are singles with remix packages.  One will be on Sullivan Room Records and the other will be on John Debo’s Mindwarp Records, which was really cool to have the opportunity to release on given John’s past contributions to building the Boston scene.  I have a lot of collaborations and originals that I’m finishing up as well so plenty of new stuff is in the works as well.