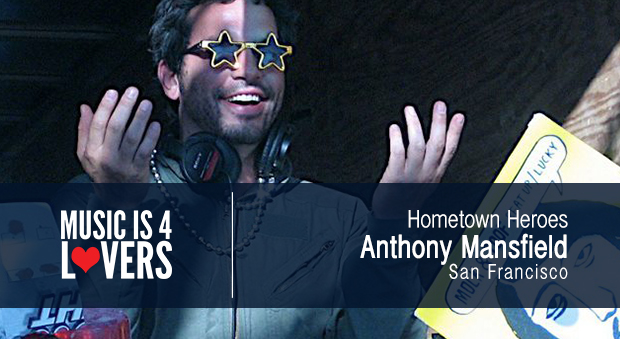 Anthony Mansfield has been on a 20-year journey through the world of psychedelic dance music ever since attending the now-legendary full moon massives of San Francisco’ s Wicked Crew in the early 90’ s. Anthony spent the rest of the decade in New York, spreading the gospel of deep house across the Empire State with a late- night radio show, his 8-year-running weekly, and the countless underground parties that gave birth to his own crew, HectorWorks Soundsystem. After an exhausting and debaucherous 2-year run as GM, talent booker, and resident DJ at upstate’ s largest live music venue, The Odyssey, Anthony was ready to return to San Francisco  Anthony hit the West Coast running in 2002, joining his old friend DJ M3 as resident DJ and co-promoter of the infamous Green Gorilla Lounge in a string of successful weekly club nights, true seat-of-your-pants underground parties, and blown- out monthly events across the Bay Area, with some of the city’ s and world’ s best names in dance music. Anthony has left his mark on Burning Man for the last decade as well, at the Space Lounge, Green Gorilla, and Disco Knights sound camps, with a trail of exhausted dancers and party people in the wake of his many epic sets on the playa. Anthony has been producing his own particular brand of dance music since his first release on Rong Records in ’ 04 with Ben Cook as “ Barfly” . Quickly moving to found his own label, Hector Works, in 2005 with NYC deep-house production wizard Nick Chacona, Anthony has worked with Garth, Tal M. Klein, Sneak-E Pete, M3, and others in the last five years, releasing tracks on Gomma, Moodmusic, Aniligital , and Om Records. His tunes have received nods (and plays) from some of the world’ s top DJs, including Dimitri from Paris, Harvey, Greg Wilson, Doc Martin, Idjut Boys, Ivan Smaggle, and Playgroup. Camped out in his room at Secret Studios, Anthony is currently hard at work on original music, DJing and producing events.

How did you get mixed up in this crazy world of electronic music?
Manny (DJ M3) used to run a Wed. in San Jose in the early 90’s and he’d sneak me in.  Manny was also on the S. Bay phone tree for the Wicked full-moon parties.  Donovan and Jason (DJ Spun) were also early friends / rave mentors.

Can you tell us what makes SF such a great city for music?
It’s Peter Pan Land for sure!  Hahhahahaha.  Couple things.  It’s geographically small and it’s had  a solid scene with a lot of continuity for decades.  Jeno is still dropping amazing sets.  Sunsets park parties are still amazing.  The geezers are welcoming to new talent and new promoters and help foster what is (in my opinion obviously) one of the friendliest scenes in the US.  No promoters call the cops on each other here!  ​And Burning Man… lots of different crews are putting huge amounts of time, love, and resources into throwing a free event.

We love Disco Knights, it’s one of our favorite sound camps! Can you tell us a little about what it takes to have such an amazing camp year in and year out?
Blood, sweat, tears, love, patience, team work, masochism, cat herding, cosmic luck, planning, networking, really talented production people, beer, not taking ourselves seriously, fundraisers, and crazy people that like to work their ass off to make something special!  ​Practice helps too.  This was our sixth year for Disco Knights, but I helped run Green Gorilla Lounge at Burning Man for many years and was part of Space Lounge in 2001.  For me one personally it’s become an advance course in people management and solving problems rather than escalating them… with a side of grueling physical labor, sleep depravation, bbq and ravelording.

For people headed to the burn for their first time, what advice would you give?
It’s going to be really, really hard (even if you are paying to be part of a turn-key camp–which i recommend against)  If you can go with people that have experience it’s best.  I personally try to be a minimalist.   You need less than you think.  See art!  Don’t just chase rave glory.  Explore the city and the open playa.  Drink water, sleep, and eat food.  I also think the most important thing is bringing creative energy and participatory intention to the Playa.  The more you give, the better experience it’s going to be. ​

When not listening to electronic music, what do you vibe on?
Hip hop, funk, disco, soul, NPR, skate videos. ​

Favorite moment of 2016?
Lot of solid DJ moments.  The Tuesday morning this set was recorded from was certainly one of them.  Family times!  I had two different great experiences playing outdoors at The Midway (for Dax and Chris Smith).  Both times people were really into it and I was feeling it!  Croatia for Love International was great.  The Sunset Campout Sunday beach set was lovely.  Thursday at Burning Man with Thugfucker was bold!  It was my girl Jenna’s 30th, Robot Heart came to Disco Knights in the morning and plugged in for a couple hours.  It’s been a busy year.  Lots of undergrounds and solid club nights at Monarch, Great Northern, Audio, etc. ​

What do you have planned for the new year?
Grow a massive vegetable garden, make some new tunes.  Throw some parties with Green Gorilla Lounge and Disco Knights.  Do some traveling to Mexico, Hawaii, New York, Sunset Campout, back to Croatia/Europe, and Burning Man​.  Also looking to generally simplify life–sometimes it gets too complicated and then you can’t do anything well.

Can you tell us about this mix?
This mix is live from Disco Knights 2016, Tuesday from 5AM-10AM!  This is the last 3 hours and we were raging.  Hard.  For the first and last time, I was drinking vietnamese cobra and scorpion whiskey.  Not recommended.