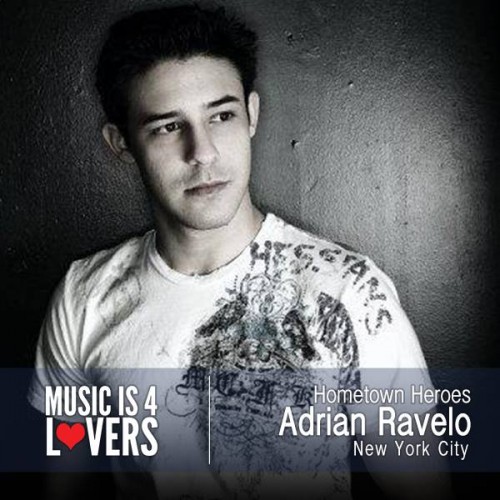 As an International performer and young entrepreneur, Adrian Ravelo (NYC) has graced dance floors from ths US to Europe; commencing his DJ experience in 1999, and making it his profession in 2003. Rock, Jazz, Spanish music and Hip hop have influenced Ravelo as an electronic music artist, allowing him to create a unique sound that will tickle your mind in ways warm and tantalizing ways.

Ravelo’s individual sound is best described as an atmospheric blend of rich, soulful, moody, deep/tech house with highlights of Jazz, Latin, Disco, and funk elements. Colorful melodies, deep bass lines, and stinging percussion are managed seamlessly together to create a unique blend of music that will appeal to all who can hold a rhythm. Ravelo has toured from New York City through San Francisco, Miami, Puerto Rico, Vegas, Dubai, Scandinavia and other territories bringing in his groovy, moody touch of house to not only substantial dance floors but to more intimate venues as well.

When Ravelo is not in the studio or grooving with people on the floor, fans and supporters can find him on his brand new program: “SoundPark” on Pulse Radio.Net

I have a Latin background. Both of my parents are Cuban although I was still born here in the States.  Even at a young age, I seemed to have always gravitated to electronic music in some shape or form. I would love to tell you that I’m classically trained pianist that scores films and writes records for a living but that’s not the case. My older brother always had pretty amazing equipment floating around the house so I would take advantage of that. I would play music that I liked and didn’t like but was at the very least always learning. I guess I was extremely fortunate to have that kind of access to real equipment so early.

The crazy journey really started when I was about 16. That’s when I decided that I was going to take music seriously and knew one way or another I wanted to be involved in it. It was around 2002 that I started a monthly radio show over a shoutcast stream called Frisky Radio. I spent the better part of 10 years with them and was lucky enough to continue to grow and evolve over that time. It gave me a platform and I got to play the music I loved. I actually ended up playing more from traveling then I did locally during that time. I was more interested in how the rest of the industry functioned over trying to put myself in a situation to play out every weekend.  It sounds a little backwards… and it was. I had my first bout doing A&R work at 17. I played my first international gig at 21. I must have only played a handful of venues before that realistically. It felt pretty unconventional to be honest.

Can you tell us a little about the city you live in now and the scene there?

Right now I currently live in beautiful Brooklyn, New York! The scene here is absolutely incredible! I’m a firm advocate of suggesting that we are in a second renaissance of sorts here in New York. You are never short of events to check out. There are usually 3 to 4 legitimate options for you when you decide you want to go out. That’s pretty incredible. New York is in a great place right now. Everything seems to feel like it has its place. There is nothing more amazing then seeing the movers and shakers playing nice with one another.  It’s rejuvenating and allows for some real magic to happen.

New York is one of the leading cities in dance music right now? What is it about this city and the quality of music that comes here on a constant basis?

Well first and foremost the musical IQ of the people here in New York has become significantly better over the last few years. Without the community there is no scene. You have some event producers and venues going out and taking risks on getting in talent that doesn’t always make their way through here regularly. That can’t be over looked. Sometimes, it’s not always about the bottom line and the ones who bite the bullet and swing to make that happen should really get the kudos here. When it comes down to it, those are the ones who influence the music culture here at the core of it. The club circuit is pretty stellar here. I think the biggest gift we all had was a huge rally of the afterhours scene here becoming relevant in Brooklyn. Some of the most magical moments I’ve had in general took place at an afterhours. I mean, you were playing for people who loved it and really wanted to be there. They were standing front and center for a reason. Who would turn down Matthias Meyer for 6 hours? Tennis for 8? On two separate occasions? Magic. That’s what it’s about. The best part of it was being able to see how much fun the djs had playing records just to play records. It wasn’t a tour or a one-off somewhere. You knew you were playing to the heart of the scene.

Can you tell us a little about Soundpark Music and your message with it?

SoundPark is an incredible labor of love that I spent a long while working on. We’re essentially a small team of four people. My co-pilot, Steve Paskovich, art-director, Erika Meitzner, and our intern Nadia Amirmolavy make up what we would consider to be a boutique audio journalism platform. There are a lot of people in the industry that do a lot of incredible work and don’t necessarily play any records. Some of these people are tastemakers in every sense of the word. You have event producers/organizers who craft incredible experiences that are consistent both visually and musically. You have recording labels that are putting out fantastic records that accomplish something similar. SoundPark is a platform where we give back to these people and give them love the same way artists/performers do. We highlight and feature people that get it and do things the right way.

“The music business is a cruel and shallow money trench, a long plastic hallway where thieves and pimps run free, and good men die like dogs. There’s also a negative side.” – Hunter S Thompson

If you are young, be patient and watch the peers around you. You have time to settle in. If you are older, don’t let yourself get discouraged with how things are going. Everything runs in phases. Keep true to your word and be kind. No one likes a dick. Enjoy the highs and lows. You’ll have plenty. Make sure to have enthusiasm for other peer’s accomplishments. It’s good to surround yourself around that energy. It will show in your work as well.

Whiskey <3. If I’m feeling fancy I’ll give it a splash of Ginger.

Can you tell us s little about this mix?

One of the great things about djing is trying to craft an auditory experience that has some form of contrast. I like to think that my sound is built more or less with that in mind. I’m a sucker for beautiful melodies and colorful, catchy, hook-lines. I love my bass to sound deep, strong, and moody. That’s where the contrast takes place. It’s a combination of warm and beautiful deep house sounds alongside colorful and atmospheric acid/ambient/dub techno. It creates the tension that I love in music. This set is a compilation of some of my favorite records that capture that beautiful tension. Really makes for remarkable afterhours sets.