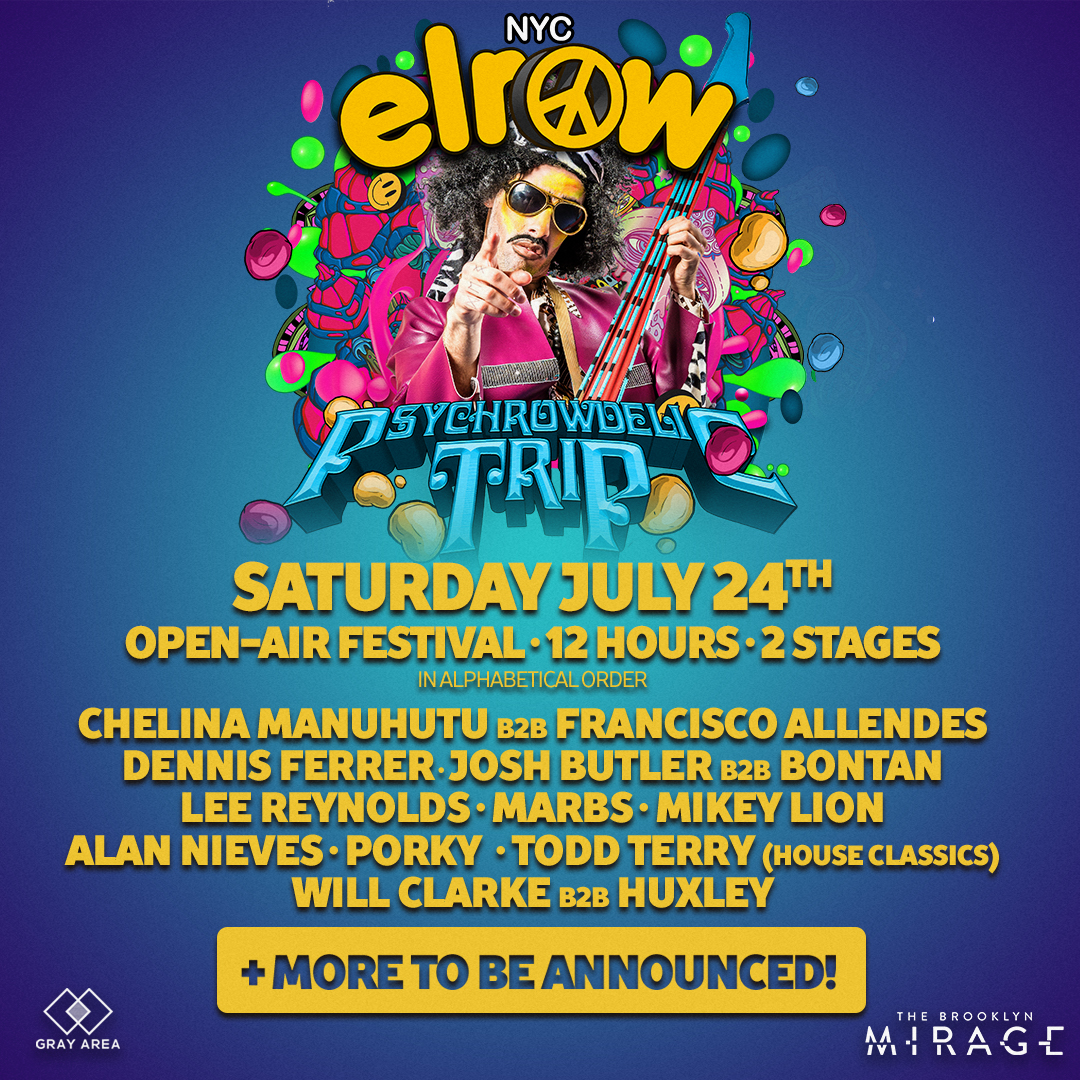 It’s time to hug a tree, hug a flower, hug whatever and whoever, as long as you spread a bit of love and laughter

After almost two years away, the #1 global roaming immersive party brand, elrow is beyond excited to announce its return to Brooklyn Mirage for Psyrowdelic Trip, a 10-hour musical, visual, and experiential extravaganza. Heating up the dancefloors for a stellar welcome back, today elrow announce their initial DJ lineup that includes leftfield collective Desert Hearts taking over Kings Hall, Saturday July 24, from 6:30 PM to 5:00 AM.

Psyrowdelic Trip is one of the first shows to return to Brooklyn Mirage and one of the very first festivals to happen in New York post-pandemic. Get in the groove man, and move with the flow as the world’s top tech and house DJs drop the needle on the record!  Dennis Ferrer, Lee Reynolds, Todd Terry playing house classics, Mikey Lion, Marbs, and Porky, plus Chelina Manuhutu b2b Francisco Alliendes, Josh Butler b2b Bontan, and Will Clarke b2b Huxley, with many more to be announced.

Psyrowdelic Trip is inspired by the freewheeling spirit of the late 1960s. In true elrow fashion, no expense will be spared in bringing to life the peace and love vibes of the era. elrow performers will be dressed as commune characters, hippies, alchemists, demonstrators, spaced-out trippers, and more. elrow’s famed artisans will convert the venue into a psychedelic playground with outrageous props and scenarios where revelers are encouraged to open their minds, share the love, and dance in harmony until they drop. In the words of elrow, “Hug a tree, hug a flower, hug whatever and whoever, as long as you spread a bit of love and laughter.”

““Its been a very long and challenging year and we are happy to say that we are finally back!!! We will dance, hug,smile and party together like never before…new york is our home and this show is the beginning of a crazy future ahead” Juan Arnau Jr, founder and CEO

“Two months ago we didn’t know if we’d be able to have elrow in North America before 2022 and today we are confirming our open-air festival. How lucky are we?! I feel so grateful and blessed that we will have an opportunity to dance together with the rest of elrow family in Brooklyn on July 24th at our favorite venue Avant Gardner,” says Michael Julian, Head of elrow North America.

As the theme suggests, this party is all about expanding your mind, tripping out to peace, love and happiness.elrow suggests that all you cool cats get ready for the wildest hippy commune to take over New York! Costumes are encouraged  — get those summertime flowers in your hair, and dress to the nines in your groovy threads patched jeans, halter tops, tie-dye, floral dresses, fringed vests, bellbottoms, and cutoffs.

As one of the most sought after experiential events in the world, elrow’s strength comes from its reputation, with NPR calling it, ‘the leading adult clubbing brand’.  Since its 2016 U.S. debut in NYC which attracted 800 attendees, elrow has steadily expanded its footprint in the United States, growing in notoriety and reputation. It now attracts more than 5,000 revelers per show.  The New York Times gave praise, calling it an “art and music extravaganza … a roaming celebration that is part Cirque du Soleil, part Alice In Wonderland.” elrow hosts the globe’s craziest parties to attend!

PLUS MANY MORE TO BE ANNOUNCED!

“The Médicis of raving” -THE GUARDIAN

“A Worldwide sensation… arguably one of the most popular global parties currently.” -FORBES

“A themed ‘happening’ … a premium on the entire clubbing experience.” -VARIETY

“One of the most successful and outlandish party brands around the world.” -BILLBOARD