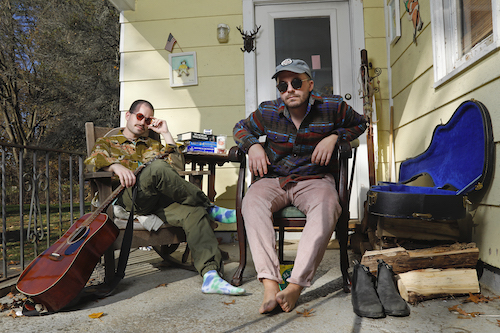 Drawing on their trademark sunkissed vibe but this time injecting it with a glistening dose of a special French touch, ‘Special Thing’ sees Gilligan Moss craft an infectious, vocal-laced disco-house jam. The track also features Bobby Wooten on bass, the musician best known for performing and touring with David Byrne.

“‘Special Thing’ was written as an ode to our French predecessors – robots and monoliths alike,” Gilligan Moss explain. “There’s something deeply hypnotic about a filtered vocal loop and chord progression, but it can sometimes feel like trying to bottle lightning. Simple songs are often the hardest, and in true collaborative fashion it’s a tune that Ben rescued from Evan’s trash pile – we’re glad he did. Grab yourself an ice cold ‘Pfizer and head down to the beach to listen to this one.”

Childhood friends who have known each other since the age of three, Ben and Evan of Gilligan Moss have toured with Glass Animals, Toro Y Moi and Tourist, played major festivals such as Coachella, Pitchfork Paris and Electric Forest and, more recently, released a 13-track mix for Adventure Time: Distant Lands – a spin-off of the popular Cartoon Network show Adventure Time – where they remixed and reimagined original clips from the show.

Taking inspiration from the universally adored electronic sound that dominated the early 2000s, ‘Special Thing’ sees Gilligan Moss draw on ideas from the past in order to create something fresh and exciting.