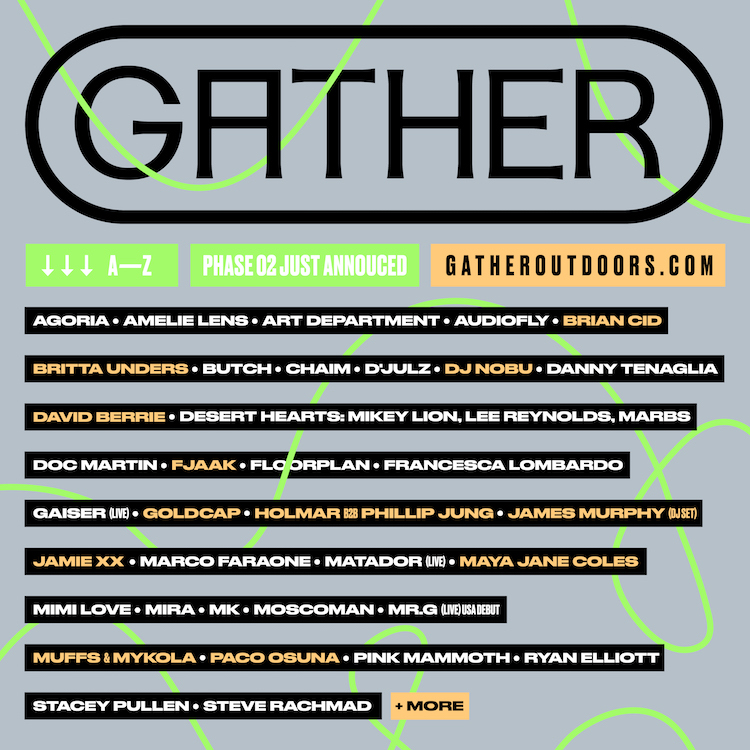 Gather Festival has released the second round of artists set to attend the inaugural event in the Catskills Mountains of New York. With a picturesque, lakeside setting, top class production, and Teksupport at the helm, Gather is sure to be one of the summer’s premier destinations for the cutting edge. Gather Fest and its trove of artists will take over Holiday Mountain May 25-26.

Heading the second-round billing is the XX co-founder, Jamie XX, who is known for his eclectic dance music sounds. Also joining the list of artists is LCD Soundsystem’s James Murphy. Murphy is planning a one-of-a-kind set filled with his favorite disco cuts.

Sound engineer Brian Cid, who has worked with the likes of Beyonce and Rihanna, will be showcasing his expertise among these electronic music giants. We can expect to see a magical b2b set from Holmar and Phillip Jung, as well. Other acts joining the billing include Goldcap, Paco Osuna, David Berrie, Britta Unders, and Muffs & Mykola.

This year will serve as Teksupport’s fifth year in the event production space. Known for putting on some of the most extravagant events, the company has combed every corner of New York City to find the most uniquely raw spaces to throw parties featuring both US artists and storied European talent. Gather Festival is going to be one of Teksupport’s biggest events to date and with a billing like this, it’s a can’t miss event. Get tickets HERE.