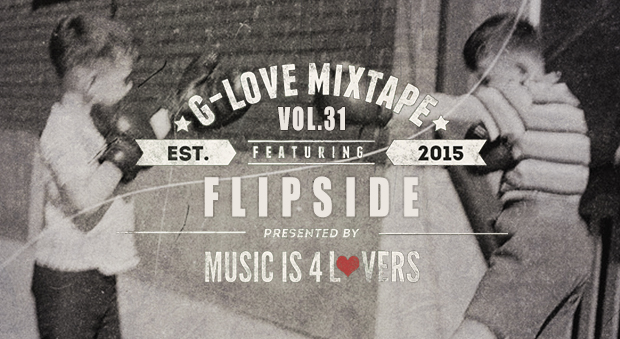 Based out of Canada, Flipside is no stranger to the electronic music scene. A true pioneer of talent, Flipside is a MC, Dj, Producer, and Label owner of DBR Recordings and Proper Beats. With a style that is versatile, he has been able to spread his craft through-out many avenues of electronic music.

We are excited to have Flipside join us on our 31st G-Love Mixtape! Enjoy his Interview and Mix Below!

How did you get into electronic music?
I started getting into electronic music through my cousin Rosario who was a club DJ in Toronto back in the day! My family and I would go visit every few weeks and I would get lost in the music my cousin selected and showed me. I then discovered late night radio where I heard techno, industrial, hip hop, and breaks on the legendary CFNY and Dave’s Dance Music. This truly was an inspiring time for the Canadian underground. Early music from Frankie Knuckles, Kraftwerk, Larry Levan, MAW, Fingers Inc, Todd Terry, Bomb Squad, it literally helped shape my musical mind and life and still does to this day.

Who inspires you musically?
Musically, I am inspired by so many artists.

Tell us about your label?
I own and operate both Proper Beats and DBR Recordings. Proper Beats was founded in 2007 and has released music from MDE, Junkies, Carlo Lio, Prok and Fitch, Chris Vench, Hatiras, Matteo Di Marr, Stanny Abram, Jerome Robins, Gigi Barocco, Reid Speed etc . We have in recent years been dedicated to unearthing new talents and focusing on building producers from their infancy or early career stage. Proper Beats (PBR) is really focusing on talents like Rovito and Nolin, Jason Fraser, Del Re, Massimo Music, Joee Cons, Hole Diggers, etc.

DBR Recordings started in 2010 when my former partner ( since then I bought him out) tried to make Proper Beats more EDM leaning. My roots as an a&r go back to Stickman and Aquarius Recordings two of  the most respected labels in underground dance music history. I discovered artists like Paranoid Jack, Evil P, etc… that being said I had to launch a sister label for the heads… DBR… which is more focused on “Deeper Beats” for example deep house and DNH’S own Nick Holder did a killer remix for us. That’s our buzz!!

When is your next release?
My next release is “Kontrolling You” a quirky and super funky analog fueled house tune I created with Chris Vench and Mellefresh! The instrumental version which Vench and I produced took us a while to get perfect. I painstakingly sat on my Novation Bass Station freaking every single sound until I felt they were worthy of release

That release will be out on Play Digital worldwide!

I also have a sick UK garage house single ” Jump On it” with Canadian producer legend Cory Bradshaw ( Juno Winner) who has sold over 1 million records and penned tunes for Love Inc. etc….  It will be out on Phoenix Music and I know it’s gonna blow people away… My flow and execution on the mic is some of my best work to date. Cory is a gem!

What are your pre-gig rituals?
I like to meditate, have a nice meal, disco nap, but most importantly…. I like the last 30 min to 60 min before set time to be still in my mind… for someone who likes to chat… I really love complete silence often… especially pre- DJ set and studio sessions. Get grounded and focus on the desired outcome.