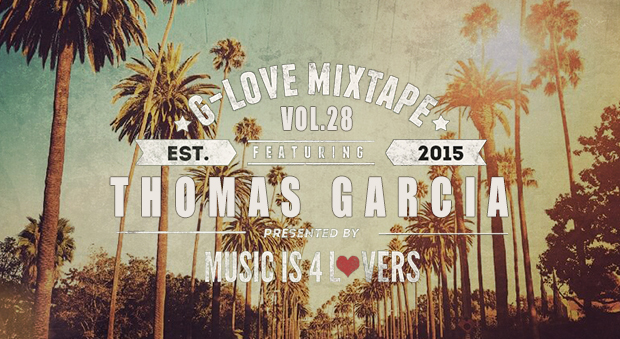 The next installment of our G-Love Mixtape series brings you L.A. based up-and-coming producer Thomas Garcia. An ICON Collective graduate, Thomas has seen releases on labels such as House of Hustle, Nite Records, Homerun House and Deep Sounds, and shows no signs of slowing down any time soon. His Latin influenced style can be heard in his killer productions, and we can’t wait for his next releases!

Who inspires you?
Inside of dance music, I’d have to say  Sonny Fodera. The consistency he had with releases when he was coming up was amazing. I aspire to be that productive.

What is the hottest track in your arsenal?
Currently, Stranger by DJ Spen. It ALWAYS works.

Where in the world do you dream about DJing?
I want to DJ wherever people love house music! AKA, all over the world.

Why did you get into house music?
There were two key experiences that got me into house music. The first was listening to John Digweed’s remix of “Crystal” by New Order. The second was experiencing the energy of Daft Punk live. Both of those events shaped my current taste in music.

What do you think is the #1 hip-hop album, or any album outside of dance music?
I am late in listening to Hip Hop. To be honest, one of my favorite albums is the White Album by the Beatles. I could play that record all the way through.

If you could get in the studio with any producer, dead or alive, who would it be?
Eric Prydz. The man is an amazing producer. Seeing how he works would be incredible for me

How do you make all them hot tracks?
The biggest thing is time management. I have a full time finance job which takes up about 10 hours a day. Without fail, i will write music for at least two hours a day. If I can get more, that is obviously preferable. With this schedule, I can do full 30-40 tracks a year, and probably release about 12 of them.