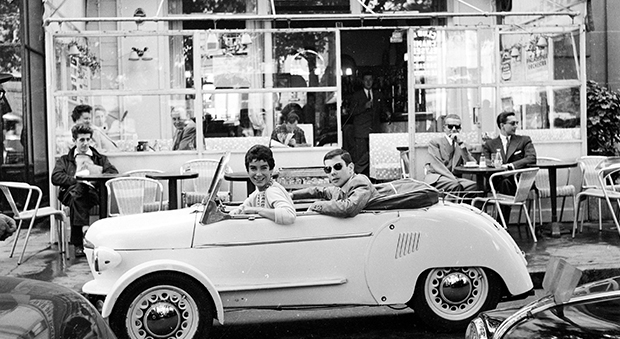 Parisian duo, Filthy French, are no rookies in the G-House scene. The production duo has previously seen releases on labels such as Sleazy G, House Of Hustle, Nastyfunk, and East Project among many others; and have also received support from the likes of CUFF label bosses, Amine Edge & Dance and MK. We welcome Filthy French duo to the G-Love Mixtape series. We’ll let the music do the talking! Enjoy!

Learn more about Filthy French in the Q&A below…

Who inspires you?
We were originally inspired by a couple of Brazilian producers like Fox Glove and Lauro Viotti. Their sound is very dark and trippy, so different from what we used to hear back in 2012 when we first started. Their creepy synths and quirky melodies made us click.

Since the past year our inspiration has increasingly come from techno, by listening to a lot of Fur Coat, and hammering the boiler room live sets and dj mixes!

What is the hottest track in your arsenal?
The remix we made for Mario Maroto & Carmona. It’s still unreleased but you can hear it at some point in the mix.

Where in the world do you dream about DJing?
Pierre: Burning Man looks completely insane, would be sick to play a sunrise set there!

Clem: In dark places where you can hardly see your decks and the crowd is so close you can feel them.

Why did you get into house music?
Pierre: I first got into House and Techno when Ed Banger Records blew up in 2007. I never thought I’d be making music one day though.

Clem: I can’t reallt explain it. When I hear some tracks I just automatically feel great and move, I can’t help it. Creating music was just the next step that came naturally after discovering house music.

What do you think is the #1 hip-hop album, or any album outside of dance music?
…And Justice For All by Metallica.

If you could get in the studio with any producer, dead or alive, who would it be?
Pierre: Mr Oizo would be interesting to say the least!

Clem: i would say Laurent Garnier, so much respect for this guy!

How do you make all them hot tracks?
Pierre: I try to produce everyday, even if it’s just 20 minutes. Before going to bed or first thing in the morning so it adds up. I produce a lot laying down in bed.

Clem: I don’t know any recipe for this. You just listen to that inner-voice chanting that music silently and let it out. The hard bit for me is deciding to move on to a next instrument in a track and completing a track. I can spend 8 hours just iterating a bassline.