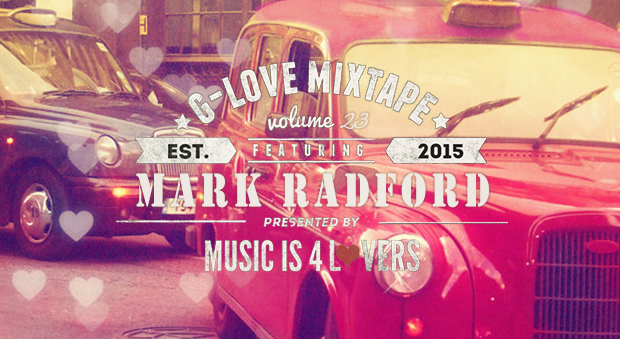 Straight from the air waves of London’s hottest Radio Station, Rinse FM, this episode of the G-Love Mixtape Series warmly welcomes the legendary, Mark Radford. Being a long standing pioneer in all that is house music in the UK, Mark Radford has solidified himself as one of the most sought after DJs in the UK. Besides hosting a weekly radio show on Rinse FM, Mark runs the highly acclaimed Audio Rehab imprint, which has seen releases from some of the best producers in game. So, get ready to let this legend help you dance the night away with his exclusive G-Love Mixtape.

Who inspires you?
My musical inspirations go far back to when I was a kid to the early days of Acid House & Hardcore, watching DJ’s like Jumping Jack Frost , Randal, Fabio & Grooverider . They took what was coming over from America and mutated it into a U.K. Sound which is where jungle was formed. Seeing these guys create a sound that was theirs really inspired me back then to become a dj and it’s still what inspires me to this day. Creating your own lane within what ever genre your in is very important.

What is the hottest track in your arsenal?
I have so much hot new music coming in all the time is very hard to narrow it down to just one track.. but one that’s doing the damage for me right now is ‘Back in the 90s’ by Gerry Gonza (dropping on Audio Rehab on 09/01/17)

Where in the world do you dream about DJing?
Once place I would love to play is Brazil, they seem to love deep dirty baselines over there and I feeling a lot of the music coming out of that country at the moment.

Why did you get into house music?
I got into dance music from a very early age, the energy and excitement that it gives me is something that will never change, from those early days of Acid House through the years of Jungle & Drum ‘n’ Bass on to U.K. Garage up to where I am today with the sound I have ended up with… it’s a reflection of these influences at the generic House tempo of 122/124 I have always looked to find new sounds and push boundaries and it seems to have all come together for me in House.

What do you think is the #1 hip-hop album, or any album outside of dance music? If you could get in the studio with any producer, dead or alive, who would it be?
Again it’s very hard to chose one favourite album in any genre as there’s so much amazing music in the world.. one of my favourite Hip Hop albums has to be one from the old skool ‘Strictly Business’ by Epmd is a classic and it reminds me of my younger years first finding out about all these amazing genres. If I could spend a day in the studio with someone I think it would have to be Derick May , his early Detroit techno tracks like The Dance & Strings of life made me fall in love with dance music and are still a huge influence over much of the genre today.

How do you make all them hot tracks?
Making music for me is a way of getting the millions of ideas I have going around in my head out there. I normally go into the studio with an idea of what I want to do, but nearly all of the time end up doing something completely different.. I think a lot of it is a fluke and I just vibe with a drum loop and synths until I find a groove I’m happy with, sometimes this happens in minutes sometimes it takes days. The key for me is to not take it too seriously and have fun with it.