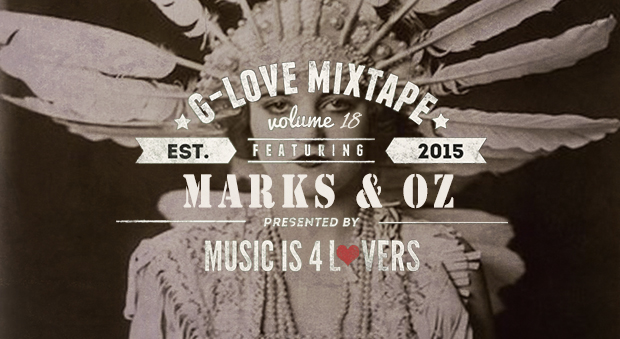 It seems as though the Australian music scene has been pumping out fresh new talent left and right over the last few years, and the next batter(s) up on our G-Love Mixtape series came to prove just that. The producing duo Marks & OZ graced the scene back in 2013 by gaining support from G-House Dons, Amine Edge & Dance. Their track “DRANK!” landed a release on the coveted CUFF imprint, and from there it took off. Recently, the boys have seen a slew of releases on labels such as Dear Deer and Jump To This, along with some killer free downloads. So, enough with the chit chat, let’s get to the mixing! Straight from down under, we bring you Marks & OZ!

Who inspires you?
SAM – Anyone with incredible musicality and that thinks outside the box. (Will Clarke, Volkoder, James Silk, Ben Remember, Shiba Sam to name a few)

BRENT – I would have to say at the moment it’s a lot of the Dirtybird crew. The stuff coming out of DB is just always next level and outside the square – they just step the level up every time something is released. I love trying to deconstruct and figure out how the ideas come about makes me get excited to start producing.

What is the hottest track in your arsenal?
At the moment would have to be Sion – Gurlz which you’ll hear in this mix. It’s got that classic G House vibe and SO much attitude

Where do you dream about Djing?
S – any of the boutique festivals here in Aus,   Splendour in the Grass would be  ultimate. Or Sankeys Ibiza for sure.

B -Mostly in Australia’s best underground venues – to get some local momentum is always awesome, and there is a wicked appreciation for underground House here. Although, wouldn’t say no to Green Valley in Brazil or anywhere in the UK….

Why did you get into house music?
B – Sam showed me a heap house back in 2012, I’ve always loved electronic music – but house was a really natural progression. I got into it because there are so many variations on a simple framework that make good tracks and transport you elsewhere.

S – It’s that groove that got me! Anything that makes you want to dance as much as house does has gotta be a good thing.

How do you make all them hot tracks?
S – with Brent living in Melbourne and me in Sydney we actually make most of our tunes over FaceTime and Phone calls. One of us will make a beat then we spend a few weeks or months finishing the track over the phone!

B – Time, effort, inspiration, patience. Wish it could happen quicker and easier, but that wouldn’t make it worthwhile when you finish it.