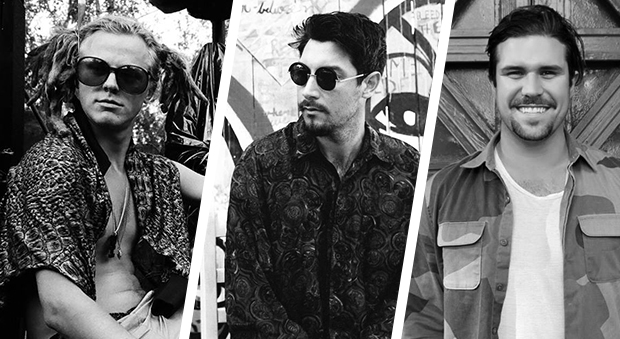 For those that know the Hood Politics boys, it’s clear that they are a force to reckon with. They’ve been doing takeovers as a crew all over San Diego at a slew of clubs and venues long before anyone knew about their posse. Now they’re taking over as a label bringing their signature party tech sound to a function near you.

For those that don’t know- Hood Politics is a collective of producers and DJs based out of San Diego with a shared appreciation for the upbeat and carefree attitude of house and techno. Self made and self taught, this group has familiarized themselves with some of the best underground producers in the scene and the label will showcase that.

Their first release is a compilation album, showcasing one track from each of the four producers behind the label. Their similarities, as well as their deviations in style are emphasized in this album, giving the listener an idea of what whole label is about.

The first track is Nutty’s, a Music is 4 Lovers veteran who was featured in July’s Lovelist for the B side track of his latest EP. Shakin the Block is built around a long, driving bassline with distorted synths and crunchy kicks. This one’s definitely on the darker side of Nutty’s spectrum. Ominous build ups and spooky percussion combined with a classic vocal sample give it that extra tasty nuttiness. This is a guaranteed romper meant for shaking up a crowded D floor.

The second track is from DJ Susan, the godfather of Hood Politics. Rilly Groovy comes in with a staple groove that’s already a tech house classic. An energetic bassline combined with HARD AF chord hits and the noise of alien raves creates a booty shakin composition.

More Than Friends has the 3rd track, bringing an absolute heater to the table. Combining very real instruments and drums with those oh so elegant tech house synths and vocal cuts, he creates a jackin rhythm that builds up to be a perfect banger. Something tells me Latmun is gonna like this track…

Dylan Payne, the dark lord of the label, ends the album with a super deep groove, vibrant with layers of synths and percussion, intricately placed around an insane kick pattern. Rim shots for days combined with techno influenced one shots create an atmosphere geared for the late night crowd.

All of these tracks can be downloaded for FREE on Soundcloud.