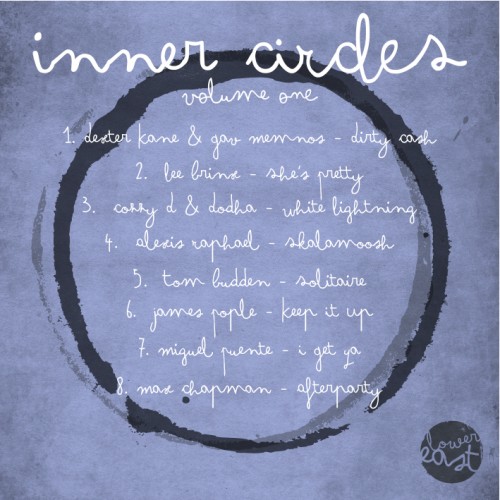 [Forthcoming Release]  Inner Circles Vol. 1 features work from all three founding members, as well as a tasty selection of up and coming and established artists. Dexter Kane and Gav Memnos have come together to offer a dance floor shaking modern version of cult classic ‘Dirty Cash’. Cozzy D and Dodha have conspired in equally mischievous fashion to offer an old school deep house groover in the form of ‘White Lightning’, while Lee Brinx brings us a heads down, pitched down vocal, Electronica inspired number called ‘She’s Pretty’.

As always we pay close attention to detail when it comes to signing artists, the first of whom, who goes by the name of Miguel Puente, needs little introduction. With tracks signed to No. 19 music and Hot Creations as well as a jam packed gig list, things are really kicking off for this Mexican born producer. As you would expect we are also very pleased to announce the debut of Alive records head honcho Tom Budden to the Lower East stable. Tom has been a prominent feature of the underground house scene for a number of years, and can lay claim to an impressive back catalog. Next up we have Lower East favorite Alexis Raphael. Making waves with releases on Hot Creations and co-running Crèche alongside Cozzy D, have ensured Alexis has hit the ground running. Max Chapman recently came to our attention after his Nu-Disco number: ‘Don’t Go’ caused a stir in the Beatport Charts, causing us to snap up his latest offering: ‘Afterparty’. Last but not least we welcome James Pople’s debut release ‘Keep it Up’; Deep House juxtaposed with an awry use of a classic sample.