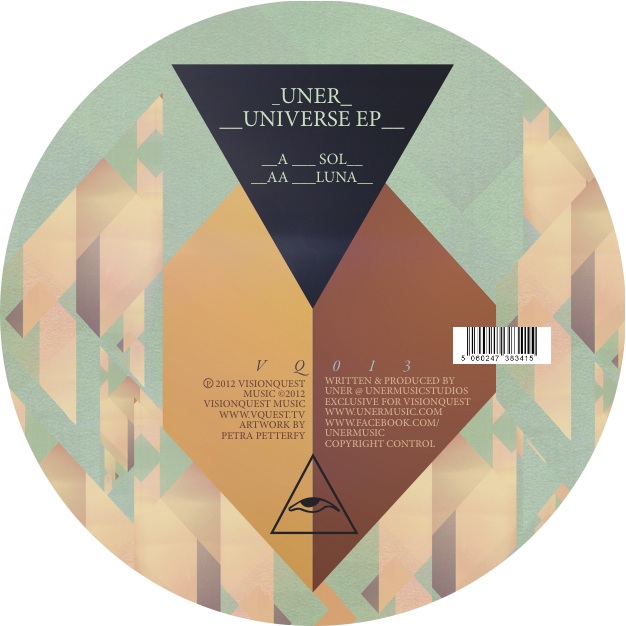 [Forthcoming Release] The new Visionquest is a soft and swooning array of drawn out sounds.  Uner delicately draws a melodic story in VQ013, appropriately titled Universe.

The beauty of this EP is its duality – its light and dark sides. The first track, Sol, is a light-hearted, smiling work. The piano interjects a heavy bass and sweetly sensual vocals, swaying from left to right,  plonking along from softer to harder velocities.  Don’t be fooled by the tracks initial calm. Soon the groove takes off into a feverish pace, leaving blissful traces of sunlight behind it.  At the break, a warm marimba supplements the piano and entices the track’s melody into an almost improvised-sounding performance that perfectly compliments the image of a universe’s random elements.

The B-Side is titled “Luna” and represents the dark side of Uner’s Universe. Accents that sound like crickets begin the track and soon a zooming, zinging, thumping orchestra of elements pulsates in time, ultimately topped by a deep-breathing bassline and a heavy, rounded kick.  Alien-esque vocals join the chorus about 8 minutes in as Luna develops into a spacey, psychedelic medley of sounds and is a true masterpiece of Uner’s collection of unique electronica.

Cuac, which will be available only on the digital package, is the meeting of the two worlds, the collusion of this universe, and perfectly rounds out the dichotomy of sounds that were developed in the previous two songs.  The tracks are long – none short of 9 minutes – and their journey reaches into a seemingly expanding universe of sounds.  Beautiful and brilliant, Uner has really created a living, breathing work that takes you on a trippy, seductive audiotour of the universe.