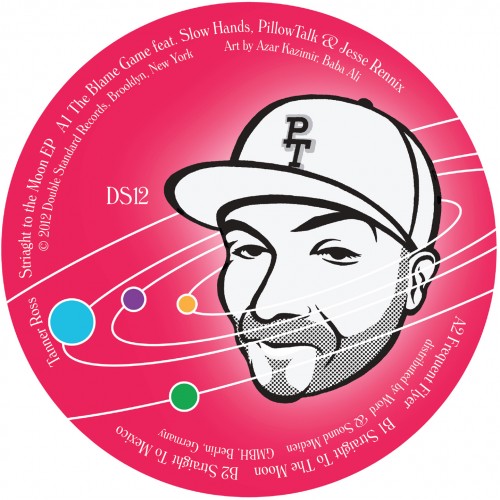 [Forthcoming Release] If you’re looking for a good set of summer time songs to play while cruising down the freeway at night or along the beach with the sun shining down, look no further than Tanner Ross‘ new EP Straight To the Moon (June 18, Double Standard). Ross, along with a slew of his Wolf+Lamb cohorts, delivers his signature take on the E-FUNK sound we’ve all come to know and love.

Opening song “The Blame Game” pays homage to 80’s and 90’s hip hop and R&B. Featuring Slow Hands, the track is a soulful melody driven along by a funky bass line and topped off with light, airy synths. With San Francisco trio Pillow Talk and Jesse Renix laying down heart felt vocals, “Blame Game” is an anthem for lovers at odds.

Second cut, “Frequent Flyer” follows along the same vein as the opener, albeit slightly more uptempo. Featuring vocals by Jules Born, one half of the duo Voices of Black, a variety of 70’s/80’s influenced synths, and a heavy, but groovy bass line, “Flyer” is “sun-soaked electro funk” perfect for riding around with the top down and the system up.

Title track, and my personal favorite of the EP, “Straight To the Moon”, completely flips the script on the feel of the record. A “menacing low-end” and head-bobbing percussion make this nothing short of gangster music. Added to that a series of spacey, out of this world FX to do justice to the song title and “Straight To the Moon” is without a doubt night time music. You can almost picture a get away driver blasting this as he speeds through the streets of downtown as he heads “Straight To Mexico,” which happens to be the title of the following track.

“Mexico” drops the tempo drastically. A quirky, twangy bass line pushes the song forward while blankets of electronic groove are laid down in the background to relax your mind.

The final original track on Straight To the Moon is a trippy, almost disconcerting cut. “Be Chillin” features Soul Clap‘s Lonely C on vocal duties, though his voice seems to be used as just another in a variety of dark effects used throughout the tracks. The “metronomic pace” at which the track unfolds juxtaposed by the off-beat synths make “Chillin” almost uncomfortable to listen to at first, but its unyielding trickery of emotion quickly penetrates your soul and releases that initial instability

Closing off the record are instrumental versions of “The Blame Game” and “Frequent Flyer.” Straight To the Moon is yet another sparkling from Tanner Ross and one that will certainly be on repeat throughout the rest of the summer.