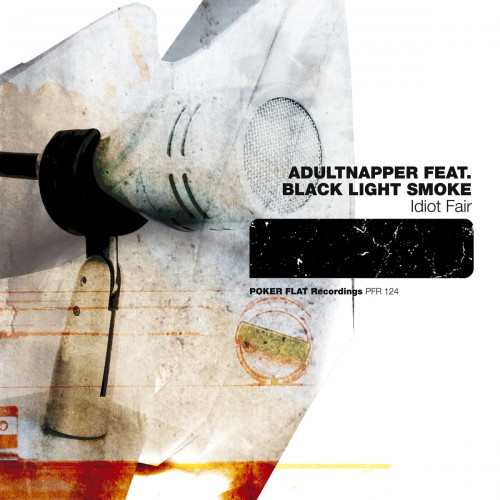 [Forthcoming Release] Poker Flat Recordings is due to release Adultnapper’s latest called “Idiot Fair” featuring Black Light Smoke. The single is also accompanied by a remix and dub from H.O.S.H. plus a dub of the original. “Idiot Fair” hits stores on December 2nd.

NYC‘s Adultnapper is well known for his freaky beat science and unique production skills. Last year‘s collaboration with Mr.C in their Sycophant Slags project saw the talented musician taking a more pop approach to club culture, and now he continues on his own mission with the inspired‚ ‘Idiot Fair’. A plot of modern angst and frustration, the song tells the story of a frustrated soul as he pushes on through a disconnected world.

Stretching out over 9 minutes‚ ‘Idiot Fair’ is a playful, dubby house joint characterised by smooth rolling bass, jazzy piano touches and an addictive vocal from up and coming vocalist Black Light Smoke. Spacious, calm and complete, it‘s a great slice of modern Dub House, with quite a message behind it.

Hamburg based producer and Diynamic label regular H.O.S.H reworks ‘Idiot Fair’ into a more techy outing, with spongy bass pongs and kinetic percussion leading a perfectly lazy low-slung bassline track. Plenty of the vocal appears in this clever re-telling of the story. H.O.S.H also teams up with a mysterious ‚deer‘ in an extra remix that mixes up playful old-school house stabs with an easy going, glitzy club vibe. This mix is also included as a digital bonus – we simply couldn‘t squeeze all of these extended beauties on one 12‘‘!