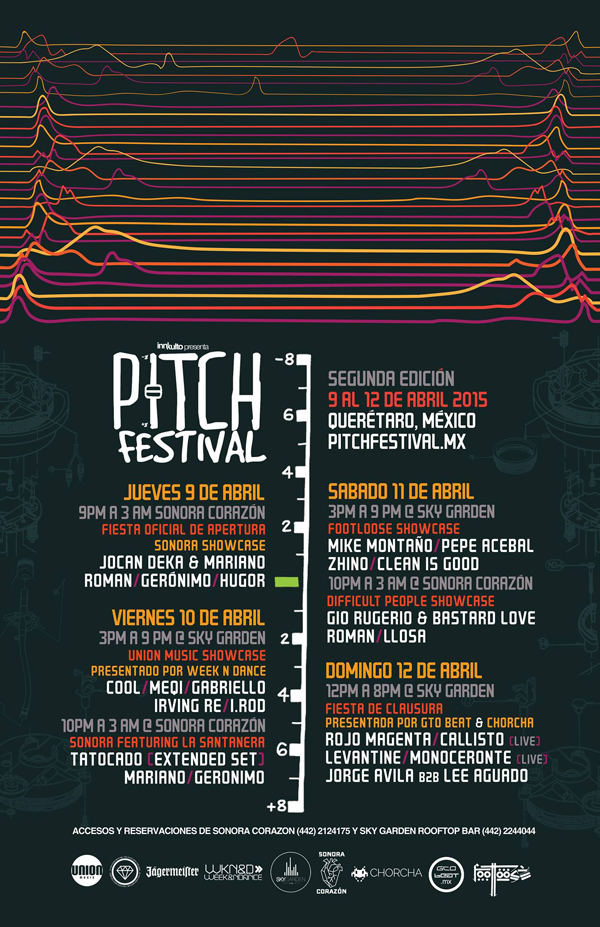 As many know, our friends from Footloose Presents have been the culprits behind many of the biggest and most memorable weekends in Playa del Carmen. Over the past three years they hosted more than 100 events which included the Mexican debut of Maceo Plex, who was among countless other anticipated global artists like Wolf + Lamb, Maxxi Soundsystem, Fur Coat and No Regular Play. Aside from their influence promoting events in the Caribbean, their contribution of Mexican talent to the scene is constant, and next weekend they present an all local line-up in Queretaro’s Pitch Festival with nationals like Mike Montaño (Beef Records, Detone) Pepe Acebal (Get Physical, Kindish) Zhino (Death Indian) and Clean is Good (Black Magic) – and in addition to sets from these 4 djs, live artwork will be installed by Fabo Torres. It’s all going down in the Sky Garden on the terrace of Hotel Impala.

The festival will take place for the second time in this city from April 9th – 12th with the spotlight on emerging Mexican talent from different genres in the underground music scene. Since it’s first edition, the Pitch Festival has run a program of day and night events in different locations in the city which is located right in the center of Mexico, uniting more than 20 artists and djs to play continuous music over the entire three days. This year’s edition of the Pitch Festival will run on Easter weekend or during Semana Santa.

Pitch had artists like Zombies in Miami, Cool & Shine, Richmed, Nobody Knows, Sakro, and Pinto among others in 2014, and this year in the form of various showcase parties you’ll find names like Bastard Love and Gio Rugerio at the Difficult People night, Tato Cado (resident of the legendary club La Santanera) and a mixture of different genres in the closing party, from a classic funk session by Rojo Magenta, to the filter house vibes of Levantine, to a live performance by Monoceronte and Callisto.

The locals from Querétaro and the region like Mariano Valdés, Irving Re, Roman, Geronimo, Hugor, Roman and Llosa will also be attending the festival. Jorge Avila and Lee Aguado from Guanajuato will be responsible for closing the event down on Sunday with an extended back-to-back session.

Sky Garden (by day) and Sonora Corazón (by night) respectively will be the brand new official headquarters of Pitch during the weekend. To gain access or check out schedules and line up visit their official website here.