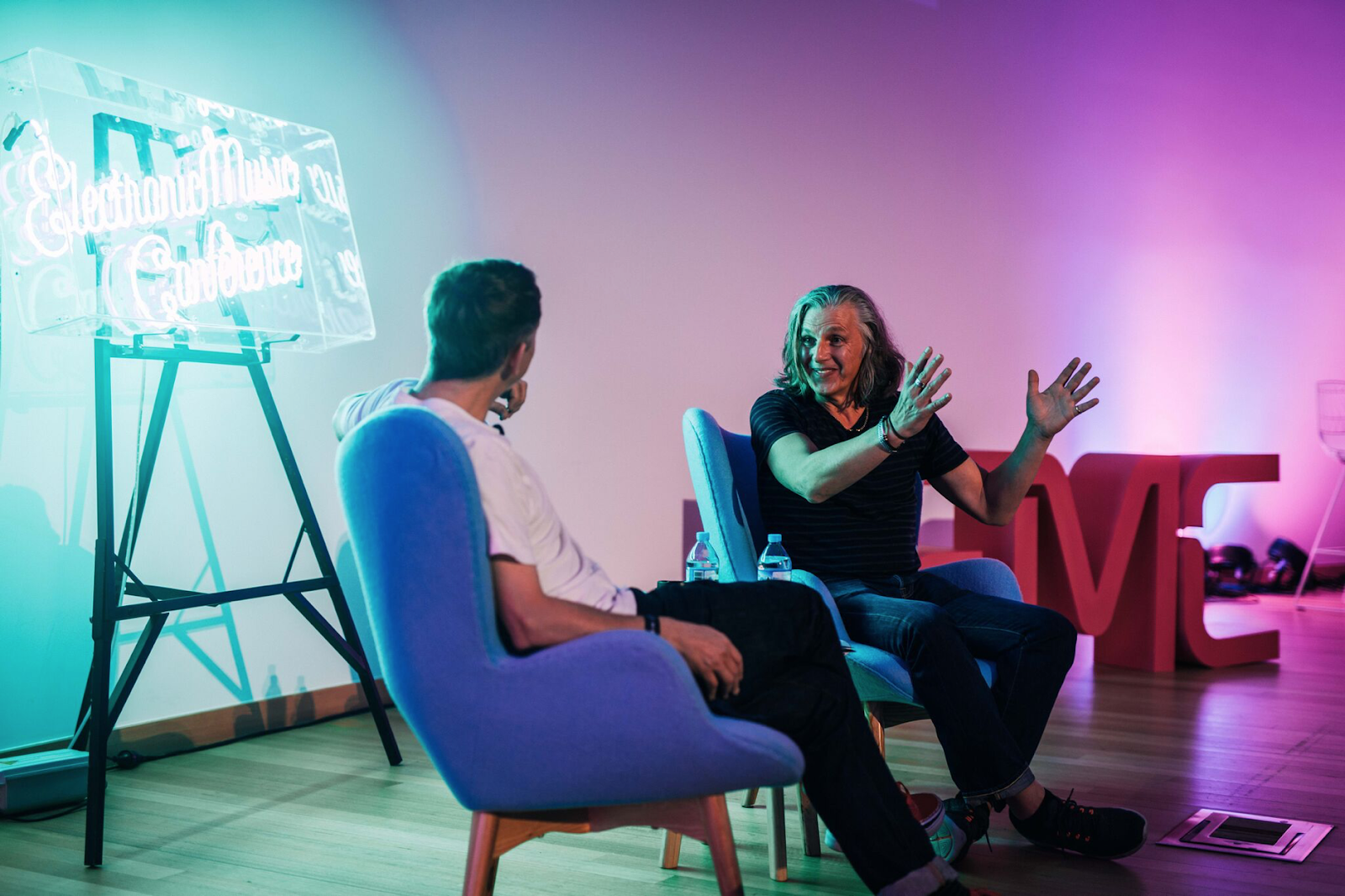 “Build a story that you want to be a part of,” stated respected Sydney songwriter and producer Hayden James in his keynote at Electronic Music Conference; where the diverse cast of characters that have all played a role in the electronic music scene’s unique story over the past forty years came together as one to share stories of the golden years, reflect on the new successes that have been built, and talk about the next chapter: the systems, technologies, processes and talents that will help us build the great stories of tomorrow.

Bringing together business and fun in a coherent event of national significance, EMC 2018 was extremely well-received, with 400 conference delegates, 90+ speakers, and 60+ artists at UTS Business School in Ultimo for two full days of delving into all facets of electronic music business and culture. Those in attendance included international and Australian promoters, managers, agents, music media, ticketing companies, club owners, local councilors, label executives, DJs, producers, and more. The positive feedback emerging from attendees, guests and industry, for what marked the seventh year of programming for Asia-Pacific’s leading music industry event, once again re-affirmed EMC as an essential date on the industry calendar.

Producer Slingo “couldn’t be more thrilled” with the outcome of this year’s event: “2018 year marked a new era for EMC in more ways than one. Already there are some incredible international opportunities for some of the artists that participated in EMC and EMCPLAY – we’re incredibly excited to see these artists signing to agencies overseas and look forward to seeing some of them on tours and festivals in exciting new markets in 2019.”

The theme of 2018’s EMC was ‘The Future of Yesterday’, with guest speakers who pioneered the international electronic scene – such as overseas luminaries SASHA, Greg Wilson and Gilles Peterson – along with home industry icons such as Australian manager John Watson (Paul Mac, The Presets) who nurtured the scene’s growth in Australia, swapping notes with a new generation of talent who are now driving electronic music forward. Together, the various guests and attendees discussed how the methods and learnings of electronic music’s rich past can inform and add value to today’s scene. In his artist management keynote Watson emphasised the importance of keeping your audience on their toes, delivering the unexpected rather than the expected, as the tool to longevity in artist careers, while SASHA, who reflected on his decades-spanning career in conversation Billboard Magazine’s Lars Brandle, attributed longevity to constantly challenging oneself. Social media – as one of the key differences separating today’s electronic artists from yesterday’s – was cited as both a blessing and a curse, with disco icon Greg Wilson longing for the days when electronic music still had a sense of mystery to it, and when the DJ played from a dark corner and not on a podium, with SASHA in agreement, highlighting the massive transparency of artists in 2018, and the pressures of electronic artists now to have a constant, and relevant, social media presence. Of 2018’s positives, Gilles Peterson spoke of the eclecticism, and fearlessness, in the electronic music productions that have emerged in 2018, and SASHA praised the widening availability of music-making software as increasing accessibility to the genre tremendously, and of the widespread global recognition for electronic music as a permanent and weighty addition to the genre pool. Leading contemporary Australian electronic artists Hayden James, and Set Mo, both certified Gold-record selling artists, who have built (and continue to grow) their careers at home here in Sydney, and now each have a firm footing abroad, spoke confidently and humbly of the hard work, long years, and determination that its taken to get to where they are now. In conversation with triple j’s Linda Marigliano, Hayden James spoke of his creative process and the importance of songwriting over technicalities, reflecting on some of his key collaborations, including with pop star Katy Perry, and the high regard held for Australian electronic artists internationally. While Set Mo’s agents, publicists, distributor and manager collectively spoke about how as a team they’ve navigated eleven single releases in 2018. Audiences were no doubt reflecting during both artists sessions on how lucky we are to have Australian electronic artists representing our scene internationally with such down-to-earth, humorous and friendly natures; speaking volumes of the reputation of the affable general character of our industry at large. ­

Holding true to its original vision of making Sydney the heartland of electronic music for the Asia-Pacific region, and exploring the Asia-Pacific as one of the biggest growth platforms for electronic music, this year EMC hosted a series of panels focused on the Asian market, including Touring Asia, an intro to Chinese Streaming and Social Media, and Bali: The Ibiza of the Asia-Pacific. China in particular, was a hot topic, with booking agents from Paradigm (US) and Supermodified (Asia) discussing methods of breaking the Asian touring market. Alchemist Group’s August Cohlmia flagged Chinese social media apps as huge assets, and the importance of integrating with those, along with an emphasis on artist-to-fan interaction via social endorsement for new artists from larger artists with Chinese fanbases, along with movie soundtrack placement. The Bali: Ibiza of the Asia Pacific session also had attendees intrigued, as tour agents and event promoters spoke of the region’s potential, and outlined the potential challenges, and gains to be had, of making a serious move into carving out a space for regular Australian electronic music events in Bali, with all agreeing that it was important to not just go to Bali to make gain, but to add ongoing value to the economy – and to hold events in a sustainable manner that won’t impact the local environment – with Raving Sustainably the feature topic of another informative discussion with Blond:ish and Globelet. Representatives from Los Angeles’ A Club Called Rhonda, and Amsterdam’s ADE, spoke on a panel about Inclusiveness in Programming, and MTV presenter Flexmami delivered an image styling intensive for budding electronic musicians, were amongst the diverse selections on offer.

In a panel reflecting on the work of the The Night Time Industries Association, NTIA’s Michael Rodrigues spoke of the how the roles of members of the NTIA are designed to intersect for best results – highlighting how the work of groups such as Keep Sydney Open and EMC in activating people feeds into the City of Sydney’s policy work. Councillor Jess Miller enlightened audiences as to the reality they face in Council bringing the r community on board to support the new plans for a 24 hour precinct in Alexandria (despite positive feedback from night time players) and stressed the need for public support of the proposed Development Control Plan changes following its 27th of November public exhibition launch. Music media heads from Sydney, Melbourne and London converged for a panel on balancing editorial integrity with commercial interests. While reaching an audience is now not the primary role of music media, thanks to the advent of social media, all agreed that music media still has an critical role to play in reaching fans through telling stories in a unique way. The ability for media to craft good narrative and provide a critical framework from which to approach the music industry is as strong as ever, with music media coverage vital in lending integrity to artists’ careers – and assisting in gaining playlist and booking placements, as Stoney Roads’ founder Andrew Cotman pointed out. Approaching native advertising from a fans-first perspective was key according to Bolster’s Oliver Hall, and DJ Mag’s Charlotte Cjliffers said it was important to ensuring content prefaces creativity before the message – readers won’t mind the subtle support of brands if the content produced is engaging and of a high-quality. Education was key in the EMC Studio, with many talented producers turning into teachers in the theatre in-the-round experience of these interactive workshop sessions, as Human Movement, Kids at Midnight and Sampology, Hood Rich and Stace Cadet, Women of Electronic Music Production Perth, and more, shared the inner machinations of their process on the big screen for eager minds to learn.

Delegates congregated at inner-city venue the Lansdowne at the end of each day to check out the talent at the newly coined EMCPLAY LIVE, a performance selection of twelve of the next big things in electronic music curated by triple j Unearthed’s Dave Ruby Howe, exposing Australia’s most exciting new electronic music artists to some of the world’s key influencers in the electronic music space. All in attendance noted the high caliber of the EMCPLAY LIVE showcasing artists, and agreed that the future of electronic music is in great hands. The live showcases formed part of a strong after-hours event program that saw clubs and venues packed out all weekend long, including the SASHA and Greg Wilson fronted Rio Revel at Manning Bar, the recording of a Gilles Peterson Worldwide FM takeover at Network Connection Records in Newtown, and with Gilles Peterson commandeering the crowd at an inner-city open air Summer Dance party as the sun set on the week that was EMC.

“We’d like to extend our gratitude to every person who participated in the program whether as a speaker or an attendee,” said Slingo in closing, “and of course from myself, personally a huge thank you to the incredible EMC team and our supporting partners.”