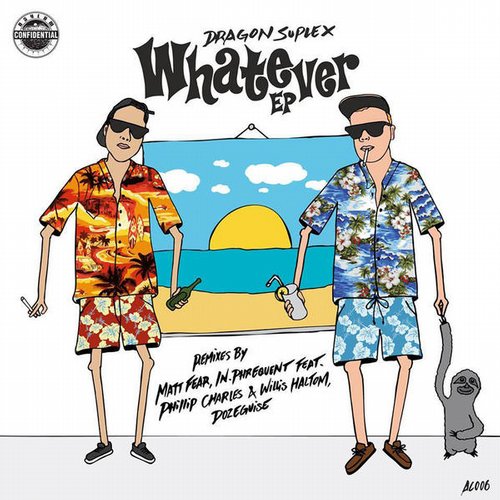 Helping to put Honolulu on the house map for a while now has been tasty young label Asylum Confidential. For the label’s next trick, they enlist Dragon Suplex, a two-headed tune producing beast from Zurich, Switzerland, for two great cuts complete with remixes from Matt Fear, Dozeguise and In.Phrequent. Dragon Suplex aka Treezy and Jonas grew up together and have been tuning their craft for ten years, first on hip hop cuts and mixtapes then taking a more electronic direction. The two also have an ever growing collection of synthesizers in their dragon’s lair, which helped to shape their current sound; throwback 80’s jams, rich house tracks and straight-disco.

First up is ‘Whatever’, a spooky and seductive house cut with warm lush beats and a rapped vocal line that really sets the groove on fire. It’s a summery, shape shifting tune that will bring lots of girls to the dancefloor. First to remix is Dozeguise aka a collaboration between Zane (Darren M Zane) and Higher Concept (Chris Chartier) who are residents at the Asylum Afterhours club. They take the remix even deeper, layering in more rubbery, gluey basslines and upping the tempo. Leeds’s rising talent Matt Fear, of labels like Kumasi, Resonance and New York’s Nurvous Recordings then pulls the track apart and rebuilds it as a floor slaying, playful house track with a sweeping bassline, tightly coiled drums and louche sense of funk. ‘When You Smile’ is the other original and is built on skipping, garage influenced drums. Nimble, one finger bass stabs keep the pressure up and more rapped vocals add an air of cool that make this a perfect poolside party starter. Teaming up for the final remix are Philip Charles of labels like Bedrock and RiffRaff and Willis Haltom, who opened the Asylum club in Honolulu in 2008. Their version as In.Phrequent is a stripped back and moody affair with big basslines and plenty of spooky charm. As ever the Asylum Confidential label have conjured up some fresh sounds here and have completed a great package with some on point remixes.