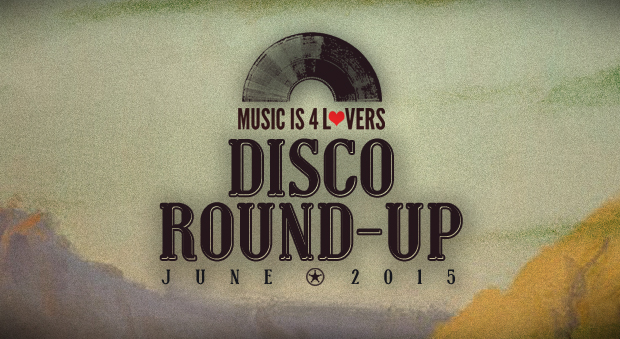 June is here and the year is nearly half over! That means it’s time for a new Disco Round-Up with some of our favorite jams from recent months. We’ve put together another list of prime cuts spanning boogie, nudisco, house, downtempo, edits & reworks.

1) Amir Pery – Great Dark Man (Original Mix) [Audaz] 2015-03-11
While digging around this month we found some possibly looked over gems like Tel Aviv’s Amir Pery on Audaz. He goes to work on a Gina X classic upping the tempo and adding structure. Both reworks on the EP are outstanding and certainly not to me missed.

2) Tom Vine – Take My Man Away (Original Mix) [Midnight Riot!] 2015-04-11
In recent weeks Midnight Riot has been issuing an array of slo-mo house, disco, soul and funk-driven EPs from the likes of Bad Barbie & Evil Smarty, Joutro Mundo, Javi Frias, GG Edits and Fabiolous Barker. In that global mix of lush sounds we also have a four-tracker from Tom Vine entitled Here’s The Remedy, and it dishes out a solid dose of future-funk and disco for the dancefloor.

2) P Sol – You Left Me (Original Mix) [Discodat] 2015-05-13
Discodat released an ace four-track EP from NY based DJ P-SOL last month. His Jalapeno Edits Vol.1 EP comes with four spicy peppers including “You Left Me” – a low slung crooner with lazy sun-kissed vibes, one of my favorites.

4) Dario Piana – Street Grooves (Original Mix) [Spa In Disco] 2015-05-21
Fran Deeper’s Spa In Disco released it’s second Free Compilation with eight funk, disco, soul and house cuts. All for free! Dario Piana’s Street Grooves has been on repeat since receiving the comp and sets a killer mood in any stage of the evening.

5) Mr. Absolutt – Kiss Of Life Rework [Mr. Absolutt Edits] 2015-06-01
Ending on another slow-mo love jam. I’m a sucker for Sade and Mr. A has put together a subtle yet effective rework of “Kiss Of Life” by the queen of sexy. You can pick it up on his Bandcamp page now.