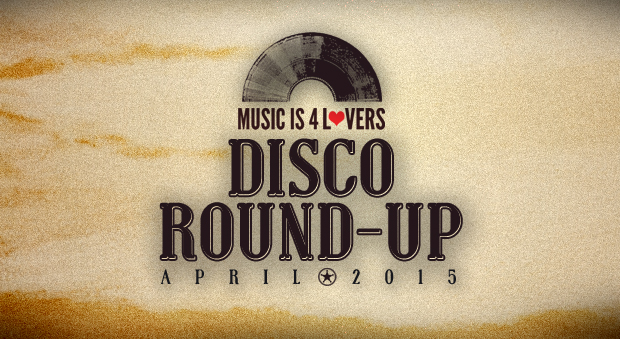 Our new monthly Disco Round-Up kicks off with a list of prime cuts from the last 30 days spanning boogie, nudisco, house, downtempo, balearic, edits and reworks, plus some re-releases, rare grooves and pretty much anything influenced by Disco…

The most joyous genre of all!

2) The Revenge – Another Light feat. Jesse Rennix (Original Mix) [Roar Groove] 2015-04-06
Edit master Graeme Clark aka The Revenge teams up with L.A. native Jesse Rennix to deliver this smooth original piece of 80s synth magic. It’s out now on Clark’s new album Love That Will Not Die on his own Roar Groove label.

3) Alkalino – Get On Down (Original Mix) [Paper Disco] 2015-04-17
Paper Disco released Trash The Wax Volume 2 last month including some killer boogies like this one from Munich-based Alkalino showing off a retouch of this TK Disco classic. Be on the lookout for Lino’s newest offerings on Audaz.

4) Beatconductor – Boogie Love (Original Mix) [KAT Records] 2015-04-13
A 1979 slow-burner for setting the mood in any room. The mighty KAT Records welcome Sweden’s Beatconductor to celebrate their 20th release with two proper reworks and they come on a limited white vinyl 10” and also digitally.

5) Rick Wade – Cruising Altitude (Original Mix) [Harmonie Park Records] 2015-04-27
Rick Wade released a couple of new EPs on Hamonie Park Records recently and we found this smooth summertime jazz number. It’s hard to believe Summer is almost upon us and these tracks are here just in time to set the mood on sunny days.

1) The Funk District – Disco Dynamite (Original Mix) [Editorial] 2015-03-26
It’s not an April release, but I’m going to cheat anyway and include a track that came out just the end of March. I have been playing The Funk District’s songs just about every time I can and the reaction has been phenomenal. This Mexican producer has immense talent and his recent track on Editorial definitely deserves an inclusion here.

2) Pontchartrain – L&H (Pontchartrain’s Hard Love Edit) [Rocksteady Disco] 2015-04-25
Here’s a Record Store Day release for all you fellow vinyl junkies from Detroit’s Pontchartrain. This beauty is released on a limited hand-stamped 7” via US imprint Rock Steady Disco. There’s no need to introduce the music here. It’s really fucking good. Have yourself a listen… Click the title to purchase.

3) Robert Owens & Yam Who? – This Time (Original Mix) [Midnight Riot!] 2015-04-23
It was just a matter of time before the house gems would get a reconstruct, and I’m very excited to see these obscured treasures (that started it all) get a face-lift and a remaster and blaze a trail back into modern sound systems. The comp also features some heavy original cuts & re-edits plus jams by some of Chi-town’s natives to the house scene.

4) Shit Hot Soundsystem – Charlotte (Original Mix) [Masterworks Music] 2015-04-20
This track does the job in any situation and I’ve also been playing this one every chance I get. Essex-based Shit Hot Soundsystem has been on fire releasing on Hot Digits, Get Down Edits, Undercover Operations and most recently putting his hands on five disco nuggets for his debut EP on Masterworks Music.

5) Rayko – Time (Original Mix) [Hotbox Boogie] 2015-04-28
Another US label that has quickly become one of our favorites is Hotbox Boogie, this time offering up some funky-fire by Spanish edit guru Rayko. This is a really sweet EP all the way through including a few that I know will be instant classics like Time and Sweet Somebody.