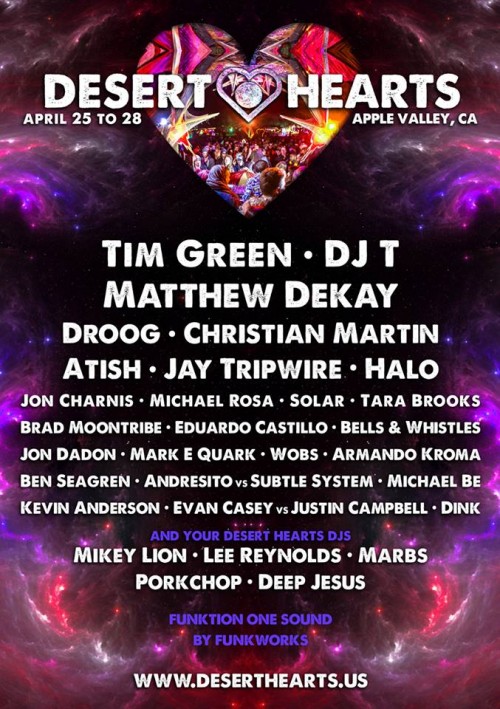 Desert Hearts has been making serious waves over the past year and solidified themselves as  an essential festival to hit with their massive One Year Anniversary last November, gaining them praise and recognition from artists and industry alike. Their One Year featured a stacked lineup with headlining artists such as Marc Houle, Noir, James Teej, Three, Thugfucker, Dance Spirit and Atish, and beyond the blissful 24 hour non stop HOUSE TECHNO LOVE musical spellbind, the festival as a whole was a dream. After just one year, the Desert Hearts crew has truly learned how to cultivate the most blissful wonderland of a weekend, manifesting the magical energy of Burning Man and leaving you on a familiar high.

The long anticipated spring festival lineup has finally arrived and man oh man, are we excited! Not only featuring amazing headliners such as: Tim Green, DJ T, Matthew Dekay, Christian Martin, Atish, & Jay Tripwire, but featuring so many Mi4L favorites & Mi4L family: Droog, Halo, Jon Charnis, Eduardo Castillo, Bells & Whistles, and our very own Jon Dadon. The rest of the lineup is filled with California’s best of the best in HOUSE TECHNO LOVE ranging from Solar up in San Francisco (who we are very excited to experience) to Wobs in Orange County (who always sets the vibe) to San Diego’s favorite hometown heroes Dink, Evan Casey, Justin Campbell, and Kevin Anderson, and of course, the Desert Hearts leaders themselves: Mikey Lion, Marbs, Lee Reynolds, Porkchop, and Deep Jesus. With so many more talented local soulful artists on the roster, the lineup is loaded but it really is more than just the music, Desert Hearts is one big welcoming family to virgins and veterans alike. From yoga to live art to interactive art installations to burning man theme camps and common areas, to fire performers and loving vibes, it really is house techno LOVE. This is one festival you definitely do not want to miss …