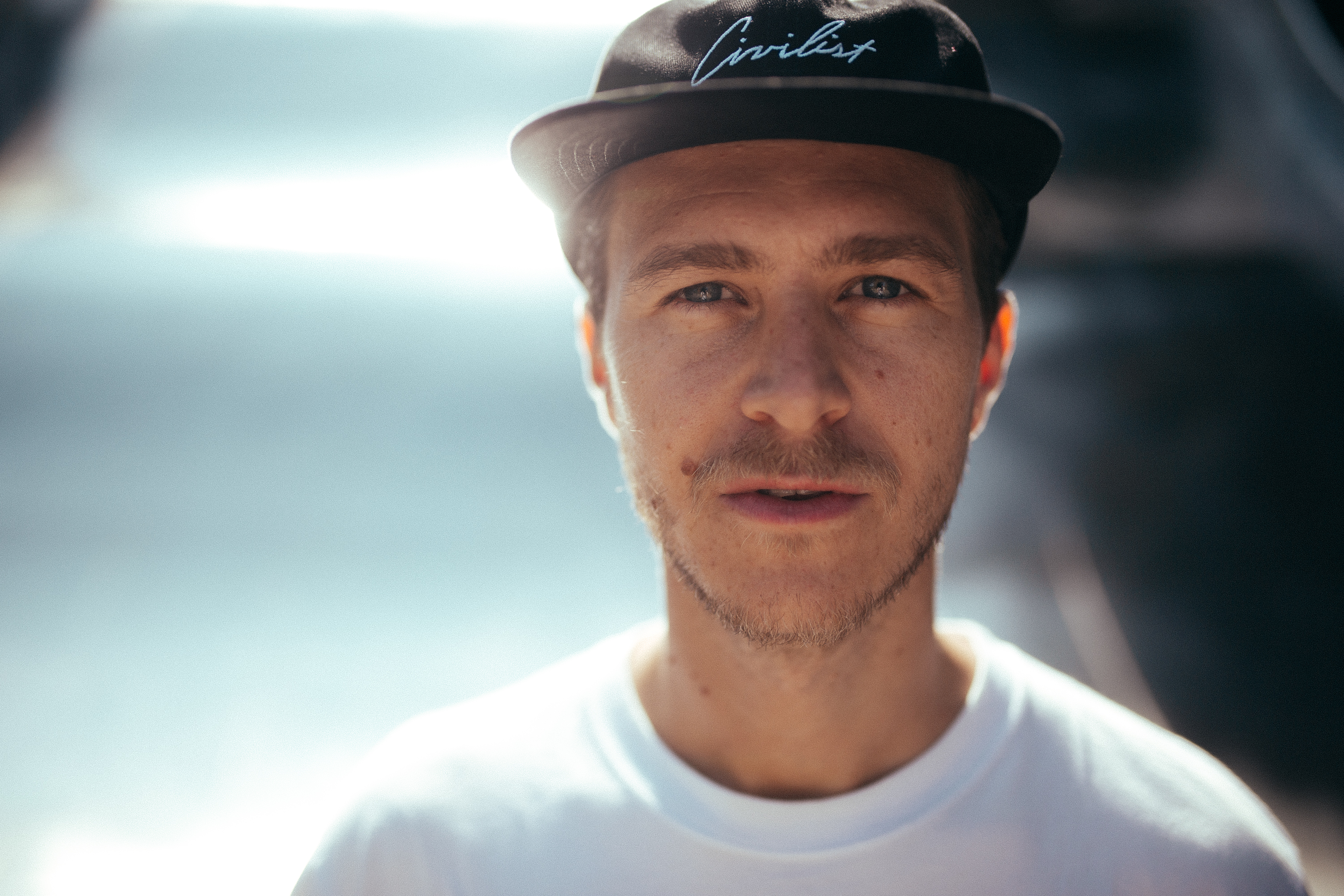 1. Hi David, great to speak with you. We understand you’ve travelled around a fair bit, can you tell us a little about the countries you have lived in and the musical influences you gained from them?

I arrived in Norway when I was around four, so I spent most of my childhood in the kind of place where farms and houses are loosely scattered all across the hills, with plenty of space for kids to roam freely. Living in Norway means living close to nature. Anywhere you live you can start a weeks long hike into the wild right from the back of your house. Not only from a child’s perspective, mythical creatures and trolls are literally everywhere. Music and sound comes with that naturally. The very distinctive sound of the Norwegian folk music is still ringing in my ear, although I can’t tell how much that influenced me in particular. Generally, music played a big role in my childhood and I sucked it all in. In retrospect, I am sure that literally every sound I’ve ever heard has had some kind of an impact on me. But it was only much later that I realised how much sounds and melodies meant to me.

Then I moved to Lanzarote with my family when I was a teenager. I still have some of the cassettes I swapped with classmates. Any music that circulated the school yard was of interest. Lanzarote felt very remote, it is a very dusty place with volcanic landscapes and almost no vegetation. Without a parent to drive you around it was easy to get bored, but there is a lot of outback, so kids come up with all kinds stupid ideas. My walkman was my most precious item. I excessively listened to early 90’s Wu-Tang Clan, Cypress Hill, Snoop Dogg and Ice Cube everywhere I went. So that was the soundtrack of my time on Lanzarote.
2. At what moment did you know you wanted to become a producer and DJ?

I did not see any of that coming until I was well into my twenties. I had been making music by electronic means in my bedroom since I was 14, but only for myself. Every now and then someone got to listen and would hint at me that I had something going on there. But I was not convinced. Still, it was my getaway. I got a computer and sat down every day for years. But it was only after I had moved to Berlin by chance that I came to realise what was actually happening.

Thanks to my mutually interested friends I somehow gained more and more experience in music production. I was pitched minor projects to do. I remember how every task was nerve-wrackingly new and every time I had to take on the persona of someone who knew exactly how things go. Being a young rookie is one part of that, everything was just freestyle. That led to getting some crazy stuff done, like writing classical scores for a couple of corporate image videos. It may not even be that long ago, but I treasure that feeling of pure inspiration and still try to set my mind back to those days whenever I need to remind myself to try a more playful approach.
This was all before the gravity of dance music had really grounded me. Basically enjoying the nightlife of Berlin as a dancer led to the inspiration and release of my first club record. Around that time my friends Gregor and Clemens told me to give it a go and play at their party, throwing me right into cold water. I can only thank them for that! Step by step they taught me everything they knew about DJing. I literally grew into it. I’m very grateful this happened. After a few years in I decided to quit my very draining daytime job and found that club music and DJing was the only thing I want to do.

My walkman was my most precious item. I excessively listened to early 90’s Wu-Tang Clan, Cypress Hill, Snoop Dogg and Ice Cube everywhere I went. So that was the soundtrack of my time on Lanzarote.

3. We’re very excited for your forthcoming release on Connected called ‘Facts Matter’. Could you take us through your creative approach for this EP?

Both tracks happened separately at first. They evolved to compliment each other, not because they both are from the same genre, but because they go in slightly different directions.
‘Facts Matter’ was based on that arpeggio and the first percussion rhythm it starts with. The melodies came on top later. Actually it remained really stripped down throughout the first test versions. At some point I decided to speed it up by adding another layer of complimentary percussions. ‘Secrets’ started off with that breakbeat part in the beginning. There was one version where the breakbeat continued throughout the track, but finally I straightened the kick to after the intro to give the track more diversity and energy.

I like the idea of having two distinctive tracks rather than one strong track plus something similar on the side. That can work well in many ways. But my most important guideline when I make music is that I want the tracks to fit into my own current set. So I like it when all the tracks of a release can be played as part of the same set.

4. This is your third appearance on Connected, what’s your relationship with the Stereo MCs now, as a label regular?
I was introduced to Nick and Rob by Adam Port, who had been working with them earlier. When they asked me if I wanted to do something together I was excited. I depend on feeling comfortable in a situation in order for musical undertakings to turn out well, and the casual expression of mutual respect is a very good start. Add good conversations and some easy online communication and the relationship will be growing strong enough to overcome all sorts of obstacles. In the end it is about having fun, so it’s good to have all of the professional basics in place. I love the the Stereo MC’s and working with Connected on all levels, I have all the freedom I could wish for. Thanks Nick and Rob!

5. Do you usually have an idea of what label you are planning on releasing on when producing, or is that only something that becomes clear once you’re done in the studio?

It varies. Sometimes a track is finished before it is decided where it could be released. Sometimes I already know that I want to make something for a specific label before I even have a sketch. Usually there is some kind of personal connection to the labels I release on. Of course the name of the label plays a role, but that’s not the most important factor. I’ll try something new if the timing is right and I feel that a particular release will be in good hands.
6. Could you tell us your top three favourite clubs you’ve been able to perform at and what’s so special about them?

I usually feel I can’t do justice to that question, because I have a very specific experience every time I go somewhere. I have had the most amazing nights in converted restaurants and other places you would not even call a club. Also there have been disappointing experiences in renowned clubs or on festival stages. I could name the obvious good clubs, names you have probably all heard before, but then what about all the other ones. In fact I equally appreciate each and every one of the places where the sound is not only a certain brand, but also taken care of by an expert, where the door policy is on point, where there is a motivated light jockey and where the bar is not overpriced and so on. It’s hard to put the finger on that thing that makes people free to enjoy themselves, but that is exactly it.

The greatest thing to me is to develop a relationship to a city or region. The connection to the crowd grows stronger over time and in the end it doesn’t matter if you play in a club or on lousy speakers somewhere in a backyard.

7. What are your essential bits of hardware and software in your studio? Could you talk us through a few of them?

At the moment I don’t own any sound generating hardware at all myself. My greatest hardware experiences were the times when I borrowed something for a short time or when jamming together in a friend’s studio. That’s when the most unexpected things happen. But ever so often that has been a one off, it seems hard to reproduce that rewarding experience simply by buying particular hardware. I’d probably end up buying and reselling stuff on such a high rate, it might become such an obsession that I lose the last bit of my precious focus.

So up until now I’ve based everything on software, mixing in samples and analogue recordings. The DAW I use is Cubase, sometimes Ableton Live for detailed warping stuff. I have some Soundtoys effects, some Arturia collection and everything else is by Native Instruments. I usually open a preset and twist and bend it until it sparks the next idea. Then I add another layer. Then I twist and bend the first sound all over again, probably ending up with a very different result than what it sounded like to begin with… Twist, bend, repeat. That’s the process.
I just appreciate the possibilities of working in the box. Even if those possibilities are fundamentally overwhelming, I have practically benefitted from the editing and recall options much more than from recording the real thing.
Of course, there is so much life in analogue machines, it’s nothing short of magical and impossible to grasp and reproduce otherwise. I absolutely despise the initially lifeless sound of the computer and I spend a ridiculous amount of time on breathing just a tiny bit of life into my compositions. But then again, by adding the right amount of detail I can make my computer sound like a multi headed rhythm section, controlling every little parameter and open up my session anywhere I go. How amazing is that.

More releases on Ouïe and Connected for sure, some remixes here and there… the rest is still in the form of notes under my pillow. It’s a continuous adventure. I am thrilled to find out more myself!

Hype up David Mayer on:
Totally Mobilee: VA – The Greatest Hits 2018 on Beatport.