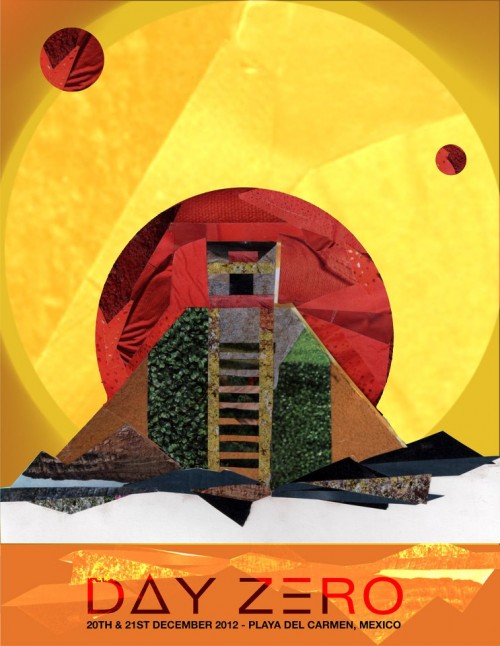 Playa Del Carmen has become THE party spot worldwide to find yourself lost in a moment, lost in a fantasy, for the months of December and January. Ever since BPM’s inception in 2008, the already magical energy of Playa has started shifting to fully embody a winter wonderland of every twisted beautiful party fantasy imaginable. Especially in the world of underground, this is one of the rare occasions where the so many of artists, the creators, masterminds, and puppeteers of these tantalizingly twisted fantasies all come together in one place. The energy in Playa shifts during these heightened months and the tales of sweet entrancement , enchantment, and ecstasy carry from the shores of Mexico worldwide to spin a sweet fairtytale of the most magical, mystic, mysterious, and spellbinding spot. This year the festival, which in years past has taken place right before, during, and after New Years Day, will take place a bit later from January 4th-13th. However, fear not veteran BPM goers and eager beavers, if you’re planning to be down in Playa before the New Year hits, you are in for a f*^%ing treat. Crosstown Rebels mastermind of deep, dark, and twisted fantasy sir Damian Lazarus has announced their plans for a 24 hour ‘Day Zero’ Party. In tandem with the symbolism of the Mayans, the ‘Day Zero’ party will honor the past year of what has been a huge energy shifting in 2012, and will bless 2013 as a clean slate and a fresh start. The master puppeteer himself sat down with Resident Advisor to discuss the event, read their article below …
Crosstown Rebels have announced plans for Day Zero, a 24-hour party taking place in Mexico on December 21st, 2012.

The event is timed to coincide with what the Mayans believed to be the end of the current “World Age”—that is, the cosmically significant occurrence at the center of the 2012 theories. Many people describe this event as some kind of apocalypse, but Crosstown Rebels boss Damian Lazarus assures us that “it’s more of a new beginning—the beginning of a new chapter.” Day Zero is a celebration of this transition. It’s taking place among the temples at a never-before-used Mayan theme park in Playa Del Carmen. The party starts 6:00 PM on December 20th and ends at 6:11 PM on December 21st—the exact moment this cosmic shift is expected to take place.

Day Zero is meant to be the first in a series of special events around the world, though no plans exist yet for future editions. Last week we called up Lazarus in Ibiza (post-disco nap, pre-Paradise at DC10) for his side of the story:

How was Burning Man?

Incredible, it really is like no place on earth. The Rebel Heart—that is, the Crosstown Rebels and Robot Heart party on the Wednesday—it’s become something of a phenomenon. It’s just so intense, literally like partying on another planet. We had about three or four thousand people there for the party. We drive out to the Playa, deep into the desert and then everyone follows on their bikes. It’s just such a bizarre occurrence. You start a party somewhere, then it starts moving and everyone starts following behind you, like all these art cars come and surround the party. I guess they kind of make a nightclub, if you like. It’s pretty special, man.

In a way that seems like a similar experience to what you’re trying to create with Day Zero. Would you say that’s true?

Burning Man offers up the experience for freedom of expression and I think this event will offer a similar platform. A chance to creatively open up and join with like minded people. We are in discussions with a couple of amazing art cars that we discovered at Burning Man this year about the possibility of them joining us in Mexico.

I should point out, though, that the actual venue that we have for Day Zero  is like nothing I’ve ever seen before in my life: it’s an as-yet unopened to the public Mayan theme park, so it has three pyramids, two lakes, four swimming pools. It’s as good as being in the real thing. We are going to have the stage in front of the main pyramid, and we are working with an incredible visuals company. We are going to be video-mapping onto the pyramids, and we have a lot of incredible surprises that will be awaiting people for the event. Basically the idea was to pull together the dream location, the dream lineup, dream partnerships, people that we love working with, to make this event something people have never seen before. It just kind of feels like the planets are aligning, and that’s exactly what is going to happen.

Can you give me an explanation of the significance of the date? What exactly is the context?

It’s the first time in 26,000 years that there will be a galactic alignment of the planets. The Mayans foretold that this would be the end of a life cycle, and many people kind of see this as being the end of the world. Most people who have any kind of understanding of the relevance of this date would say it’s more of a new beginning—the beginning of a new chapter. I think that the date December 21st, 2012 is the kind of thing that a lot of people would generally just dismiss as hogwash or just a load of old bullshit, but I think that for the first time we have something that our generation can latch onto that actually feels like something special. I think there’s been some kind of generational shift in attitude, there’s a lot of uncertainty in our world at the moment. There’s a lack of religious belief, and so that kind of means that the people don’t really have anything on a higher level to hold onto. I think this date actually offers people the chance to take a bit of stock of their lives, to think about who they are, what they do, what they give, what they take from this world in which we live. I think putting it into the perspective of what we do as musicians or DJs or producers or artists is a really good opportunity for people to come together and celebrate the fact we’re here and celebrating the way we know best—by putting on an amazing party and enjoying the best possible music together with our favorite people and basically coming together to celebrate the life that we have and see what’s about to come next.

Do you think parties and festivals can have a semi-religious role in people’s lives?

I think a lot of people follow this music and this lifestyle as ardently and with  as much passion as many people follow a religion or belief, you know? I’ve personally witnessed and experienced so many moments of pure beauty and love and just true moments with dreamlike qualities that you couldn’t imagine happening in everyday life, for example a sunrise set to the backdrop of our music at a place like Burning Man or certain records that just kind of lift your spirit to a higher place, moments of pure clarity when you’re enjoying a moment like dancing with a friend or a stranger. I think our music plays a very important role in a lot of people’s lives. I think now’s a good time to appreciate that and to really show people that this music is about more than just paying money and walking into a nightclub and getting off your head for a few hours, you know?

Would you say this is the most special event Crosstown has ever done?

Absolutely, yeah, without question. I think it was just kind of time for us to step it up a little bit and try something different. I’m a bit of dreamer, obviously, and  I have this whole idea in my head of how this event should be. Like I said, it’s trying to put my dream team together, both artistically and musically and from the production level, and involving people that bring something extra to my life that’s not just the day-to-day running of a record label or a nightclub. So I’m hoping this is going to be something very, very special, not just for Mexico but for our friends all over the world who will hopefully come and join us.

Have you given much thought to future Day Zero events?

Well realistically we’re so busy working with this at the moment that we’ll have to take each day as it comes, but I like the idea of finding alternative spaces, maybe places of natural beauty, to hold similar events in the future. But for the moment, we’re just concentrating on this one on the 20th and 21st of December. I found out that the Mayans say that the end of the calendar cycle will happen at exactly 6:11 PM on the 21st of December Mexico time, so I decided that we’d run a 24-hour event which would start at 6:00 PM on the 20th and close at exactly the moment the Mayans say that the cycle ends. So I don’t know what’s going to happen at 6:11 PM on the 21st—I suppose you have to wait and see—but I know that we’ll be planning something very special leading up to that.