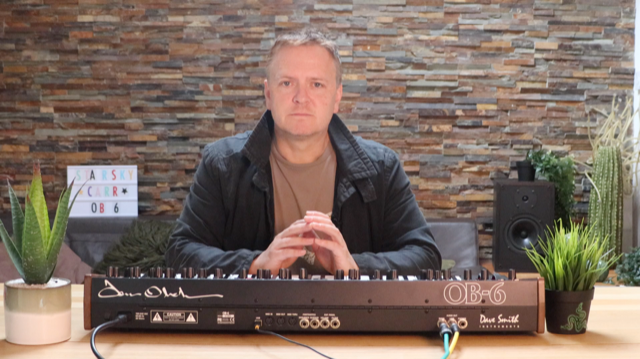 Clubbing TV recently announced a weekly tv show dedicated to audio production presented by Starsky and produced by Clubbing TV. Published & Promoted on Youtube, Facebook, Instagram, Twitter, web and mobile apps to a fan base of more than 300,000 fans & followers, every week from the Clubbing TV studios, well known YouTube personality Starsky Carr talks, uses, comments, rates and recommends DJ gears and studio equipment in various situations. The show is also broadcasted on TV in more than 50 countries every Friday, in prime time at 7PM, with replays on Saturday at 2PM and Sunday at 5AM CEST. Sounds exciting, right? Well, to find out a bit more about what’s happening, we caught up with Starsky recently to get the lowdown on what’s been going on of late...

How has 2020 been for you? How has Covid impacted things on a personal and professional level? This year has been very strange for everyone.  I’ve had one close family member die and another been hospitalised with COVID pretty early on so it hit home earlier for us than for most people.  Back in March when the number of deaths was increasing to around 1000 per day in the UK it was a completely weird experience.  There were no cars on the road, and old neighbours said it reminded them of living here back in the 60s.  Professionally though it’s been quite productive, as you can get a lot more done when you don’t go anywhere. The main drawback is obviously you don’t get to mingle with people which is pretty much the essence of music. It’s not a solo activity, music is for playing to others, and playing with others.

How do you decide who to work with in terms of tech brands? is there a certain music style you like to stick to? I don’t really have a particular affinity to brands in particular, just good kit that does a useful job and does it well.  It just so happens that the more famous brands are popular for a reason. And I did notice at some point during lockdown that I’ve got plenty of Moog, Sequential, Korg and Roland synths that have remained in the studio for years. More recently I’ve been picking up some of the Behringer clones and Erica Synths eurorack modules. I’m not going to stick with any kit because of the brand, but because it performs well.  I wish I could stick to a single style of music, but I just find there are so many creative opportunities that open up once you start writing, that it’s fun to explore different routes.

What’s the one piece of tech that you really love? And why? That’s a really tough question.  I love my old alpha Juno 2 synth as it was the first I ever bought, and it’s been with me for years, but I also love the Minimoog as it’s a Minimoog! Having just put together my first modular system, it’s weird but you have a real affinity with it as you designed and built it yourself – it’s one of a kind and it’s mine. Very strange… but if forced to only keep one it would be the Minimoog. Not only because of its history but because it sounds so good.  But then there’s the Prophet 6 and the OB6…. Oh no – it’s too hard to decide.

How did you get into the production game in the first place? I’d picked up a really basic Tascam Porta05 4-track, Juno2 and old Roland TR505 drum Machine in school. It literally took me years to save up working all weekends and 3-4 nights a week after school in the local minimarket. After taking that long I was going to get every bit of performance out them I could. I then joined a band in University and bought a sampler which became the focus of most of our set in the end. I don’t think the guitarist was impressed, and wouldn’t play on the new tracks!  But that made the basis of a mini studio. After recording the band, then branching out making some tracks on my own and taking them to a local dance label I was well on my way. It just grew from there.  I worked with local DJs, got interest from record companies and finally started it full time.

Clubbing TV are industry leaders in a field which has really taken off in recent years – what do you think makes it special? And what are you most proud of about working with them?  I love the vibe of Clubbing TV. It’s as enthusiastic as I am about music and that shows.  You have to have a passion for things and want others to get the fulfilment and enjoyment from the same things as you do, almost an evangelistic zealousness.  Clubbing TV has this and it feels like a nice familiar space, even though it’s on TV or online. You can still feel the vibe and excitement you get at live gigs.

And what are the hardest parts of working online? Was it hard to get your personality across at the start for example? That’s an interesting question. When I first started my youtube channel, it was purely to give a little back to the music community after having used it as a resource myself. I knew some stuff that might help others, so why not make a couple of videos? I was quite surprised when I received comments about how enjoyable and how much fun people thought they were. I had never thought of them as entertaining or fun, but then I realised I always put some light hearted moments in even my really technical videos, more to stop the monotony of editing that can take hours and hours – I have to enjoy myself somehow. I guess I was just surprised anyone was watching close enough to notice them!

And going back a bit, how did the opportunity arise for you to work with Clubbing TV? I first spoke with Clubbing TV in late 2019 – they were interested in having a music tech programme on the schedule and had seen some of my youtube videos. The Youtube channel had gained a reputation for really deep unbiased reviews and demos, with a little bit of fun thrown in. It’s not like listening to a talking manual, but hopefully like listening to a friend enthusiastically describe how to use their latest bit of kit, which I think is what they found appealing.

How hard has this period been for you, can you see anyway out of it for us all? I think most producers feel like we’ve been preparing for lockdown all our lives! We’re well used to being stuck in one room for days on end looking at (and arguing with) the same people over and over. But if you’re used to playing live gigs it’s a complete nightmare.  You can’t get the feedback you get from a room full of people bouncing up and down! Collaborators can’t come to the studio, and for lots of folks it can be really isolating.  Musicians tend to be extroverts, or at least enjoy playing with or to other people. So it’s all very strange. I don’t think there has been a time like this in the whole of human history so we’re living through a unique time.   There will be a way out, there will eventually be a vaccine or herd immunity will kick in. This won’t last forever, and in the meantime we have to find ways to be creative while looking for the light at the end of the tunnel.

Tell us about the new show you have launched – who came up with the concept? As I said thew YouTube channel can get quite techy, which is great for that audience.  It’s exactly the info my subscribers are looking for, but it can be far too technical for a more general audience. Clubbing TV asked if I could produce some shows that left the studio, and were not too techy and a bit of fun. For me it was an opportunity to do something I’d not done before, which is always an attractive proposition, and one I couldn’t refuse.

Who is it aimed at? What will it offer? The show is aimed at anyone interested in creating their own tracks, or making beats or anyone who’s just interested in how it’s all done.   It’s a light-hearted look at all aspects of creating dance music while still giving some useful info.  From comparing different types of kit, to explaining how synths work and how to arrange a track or reproduce tracks in a certain style.  So anyone who has some music making apps on their phone, tablet or laptop who wonders how to go about making a track can get something useful from this.  And if you’re more serious about your production you’ll get some really useful advice, tips and tricks.

What is the future of live streaming do you think? Will it continue to grow? It’s difficult to judge whether the exponential growth of streaming we’ve seen will continue into the future, especially once we’ve seen the back of the virus.  I think now people are used to the format, it’ll stay with us, and it’s a great way to get your music out there.  I loved watching KiNK for example, and it really helped me to work out how he creates his sets and works his kit, which was useful for that episode!  I wonder whether it’ll become too much of a hassle to do once everyone’s busy again, just another task to squeeze into a busy schedule  … but social media tends to have a grip on us and experience shows us that once we’ve started with a format we can’t get enough.

What are your hopes and dreams for 2021? Well let’s hope it a bit of an upgrade from 2020 at least! We all hope we can come out of the other side of this situation, but let’s hope we can see some positives from it as well. Let’s hope that we’ve demonstrated that it’s better to have more time for family and friends, and think about or impact on the world and others around us more. Maybe 2020 can be something we look back on as a pivotal moment in history that eventually changed things for the better.

Keep up with Clubbing TV on Facebook and Instagram and tune in to Starsky show on /www.clubbingtv.com/ or watching the channel’s showreel at: https://pro.clubbingtv.com/showreel/