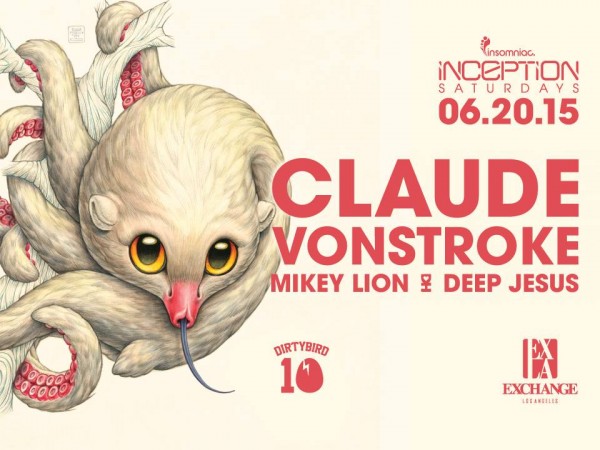 Upon entering Exchange, an unmistakable beat encompassed the walls and every individual inside- Mikey Lion was in full force starting off the night bringing his unique and powerful techno taste to the table for everyone to consume. Moreover, there couldn’t have been a better opener for Claude VonStroke given that the two both have rap/ hip hop influences. With a top hat and feathers in sight, the groove was immediately irresistible from the start.

As the dance floor became more packed, there was no doubt the Dirtybird Father himself was about to take the stage. Once that heavy West Coast bass began, the crowd unleashed for the patiently awaited Claude VonStroke. His set incorporated his signature urban sounds and an unmistakable thumping bassline. In the mix of it all, he dropped his very much anticipated new song, “Make A Cake.” From start to finish, Claude VonStroke delivered with absolute fire. As he began to wrap up his set somewhere around 4AM, the night was anything but over.

Deep Jesus took stance at the DJ booth, and began to deliver a little something different than his norm. Rather than his definitive, dark, melodic style of house, he brought a more upbeat style of tech house. It was the perfect closing set for such the night.

Dirty Hearts was definitely a night for the books, and we here at Music is 4 Lovers along with the rest of the attendees that night certainly hope to see more of this promising combination of talent in the near future.