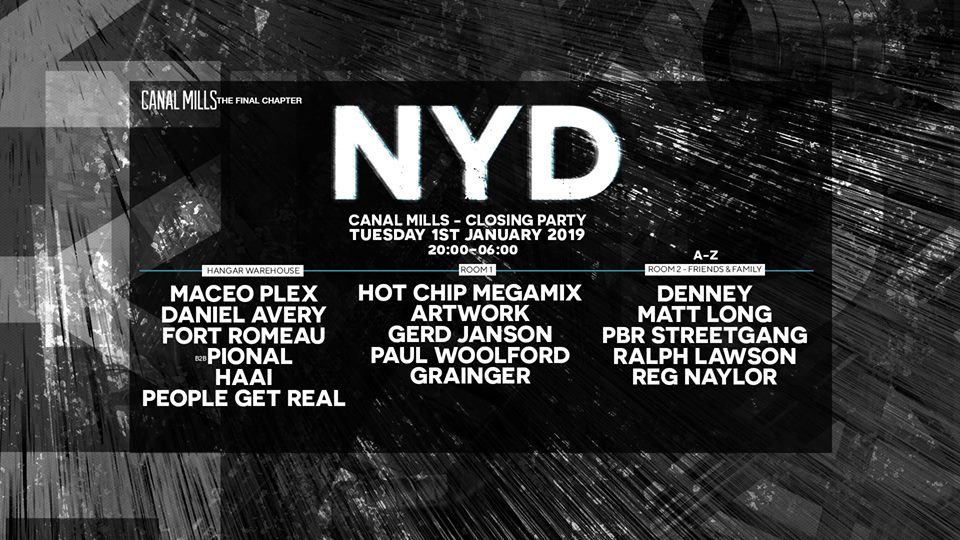 Over the years there have been many highlights at this historic former mill, from the famous 12 hour NYD parties to back to backs between Four Tet and Caribou, Stormzy’s debut in Leeds, the mini-festival like Garden Parties, magical live sets from Bonobo and countless other raves, beer festivals and plenty more. Untold musical memories and lasting friendships have been formed over the last five years plus at this special venue, and there are two final chances to be a part of a little piece of Leeds’ dance music history.

New Year’s Day will be different than in the past, as it will be split across the two Canal Mills spaces, plus a new, never before used space called the Hangar Warehouse. Canal Mills main room will bounce to a special mega mix from multi-talented and multi-genre specialists Hot Chip, the musically playful Artwork, effortlessly eclectic master and Running Back boss Gerd Janson, emotive lo-fi house star plus the always on point Rinse FM man Grainger.

The second Canal Mills area will be a friends and family room with impossible to predict Paul Woolford, who can turn out raw techno and rave under his Special Request guise, or happy, vocal laced piano anthems on Hot Creations as well as well as bass driven jams on Hotflush, all of which prove he is one of the most accomplished producer’s and DJs in the game. Then comes disco house dons PBR Streetgang, Back to Basics resident and inner city electronic co-founder Ralph Lawson, plus party starting DJ Denney, who is an underground hit maker on labels like VIVa Music,  2020 Vision and of course Hot Creations as well as a regular at vital parties like Ibiza’s DC10. Last of all, Grainger and Matt Long bring all their know how tot hearty.

Last but not least, the new Hangar Warehouse welcomes Ellum Audio boss Maceo Plex’s main room tech house after the Barcelona based artist has once again smashed up dancefloors all summer, plus Daniel Avery’s darkly atmospheric techno, a special set from house royalty Fort Romeau back to back with Hivern Disc’s Pional, plus former Phonox resident and 2018 breakout star HAAi as well as local lads People get Real.