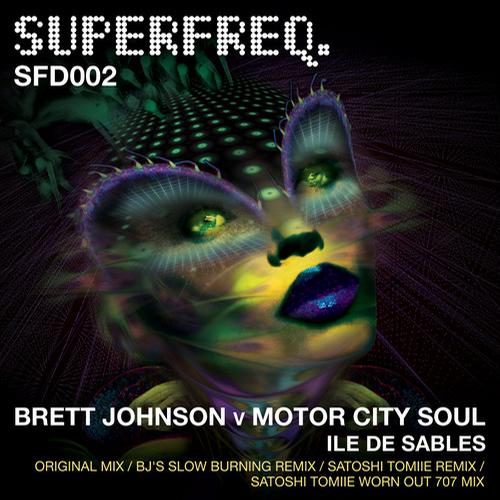 This is something of a bitter sweet release for Superfreq as it is the last single ever to be released by much venerated duo Motor City Soul aka Matthias Vogt and Christian “C-Rock” Rindermann, who in late 2012 decided to end their mutual work after a decade long partnership. This single is something special from the vaults, a track that came about because some months ago Texan Brett Johnson visited the German pair and was based in Christian’s studio in Hanau as he played gigs in Frankfurt, Berlin and Mannheim. Unsurprisingly they started to play around with music, Brett built a basic jackin track, Matthias added a little keyboard-chord-magic and finally Christian added FX and a proper mixdown, Ile De Sables was born.

The track is a robust bit of machine funk that slowly teases and pleases with its thick, dirty bassline, echoing train track claps and lush, widescreen and oversized chords. It rolls and rolls along, growing ever more vibrant and melodically beautiful as it goes, one for both the heart and the heel, for sure. The track also comes with three handy remixes. The first is from Brett himself and is a slowed down, slow burning gem where the synths get smeared and skewed into even more elastic patterns behind the chugging beats and silvery percussion, whilst the other two remixes come from New York house legend, Satoshi Tomiie. The first from the SAW RECORDINGS boss is a more spangled version with broody synths underpinning a classic house groove that shuffles along on dusty drums. Hi hats grow ever louder in the mix as tumbling drum fills bring plenty of energy to the otherwise finely balanced and knowingly restrained track. Satoshi’s other version, a worn out 707 remix is another down low interpretation with rattling chords setting an inviting mood as the crisp percussion and nimble synth work slowly elevates you throughout. A classic track with three classic remixes makes for another great package from Superfreq.