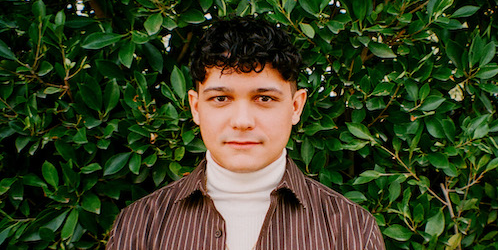 An honest, emotionally-charged modern pop/R&B ballad, ‘Punching Bag’ sees Brandyn channel the heartbreak attached to a break-up into something beautiful and profound. The similarly sincere and personal official video helps communicate this energy in visual form. The track follows last month’s ‘Addicted’, his first independent release in five years, with both tracks set to feature on his forthcoming EP ‘F.A.T.E.’, due out 25th June.

“‘Punching Bag’ was written about the end of a five-year relationship that got toxic,” Brandyn explains. “I wrote it on acoustic guitar in the house I was living in with my ex. We had decided to take a break but still tried living together. The night I wrote this song was the day I actually moved out. My ex was grieving the loss of a loved one two years prior to our breakup and she ended up taking a lot of the emotions out on me.

He continues: “‘Punching Bag’ was created out of desperation to understand what was happening to the relationship as well as find some peace in understanding that it wasn’t her fault, because I was all she had.”

A prolific songwriter, Brandyn’s co-writing credits include Keith Urban, Rich the Kid, Backstreet Boys, and was recently featured on Afrojack’s ‘Wish You Were Here’.   Having amassed almost 100 million Spotify streams across his own catalogue with tracks including ‘State I’m In’ and ‘You & I’, Brandyn has cultivated an undeniable following – but recent buzz doesn’t mean he has any intention of slowing down.

With a childhood spanning Florida, California, Texas, Missouri and later NYU, Brandyn Burnette is no stranger to doing things a little differently. Sitting at the intersection of soul, pop and R&B, his transcendent, distinctive style is highly intentional: relatable enough to be undeniably catchy, while maintaining a level of earnest vulnerability that’s difficult to come by.

Drawing inspiration from an eclectic roster of musicians from John Mayer, to Dominic Fike, to blink-182, Burnette’s style is a purposeful (and clever) anomaly: in building songs that pull from his favorite elements across genres, his sound is fresh, yet familiar.

Steeped in emotion and inspired by heartbreak, ‘Punching Bag’ is an affecting single that documents Brandyn at his most vulnerable.