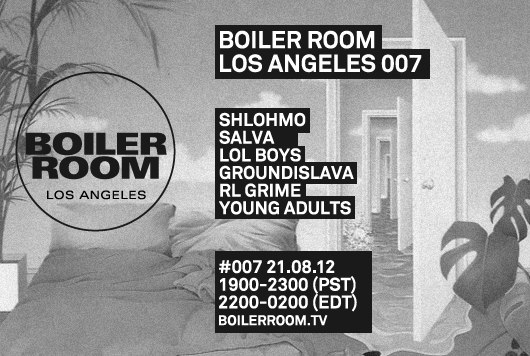 [Parties] LA-based label, Friends of Friends, has a unique and diverse roster that frequently throw down for some of the best parties in LA.  Their artists have consistently graced places like the legendary Low End Theory and now they have conquered the coveted Boiler Room, for which the collective/label had over 80,000 viewers on Tuesday.

The Boiler Room’s 7th LA installment was located in the warehouse district of Japandown, in a beautifully redone space with excellent sound and sexy ambiance, and the place was already buzzing right as the broadcast began.  Young Adults and LOL Boys held down the opening with some hot deep house, nu-disco jams and, my personal favorite, bold techno.  The tunes worked their magic and got the crowd nice and loose for Groundislava, who posted up with an APC40 to do some live FX improv via Ableton.  He played everything from techno to hip hop beats and his own productions, harmonizing with the crowd’s energy as he flawlessly maneuvered from genre to genre.

RL Grime and Salva  followed with equally eclectic and interesting sets, pumping up the party with each consecutive track. The collective’s theme song of the moment, from LOL Boy’s latest album “Changes,” played in several different versions throughout the night and each time it was sung along by the crowd with intensifying enthusiasm, “Things won’t change until we do!”

The night was closed out by FOF darling child, Shlohmo, who recently returned from his first overseas tour and has produced a slew of top notch tracks, including “Rained the Whole Time,” a single off his incredible EP titled Vacation, and was also beautifully reconstructed by musical genius of the moment, Nicolas Jaar.  Shlohmo played a set of hip hop beats, the caliber of which I haven’t heard in a long time, and properly showed the world what the West Coast has been all about. The energy in the room left no doubts — California knows how to party.


Friends of Friends is certainly a label to watch, as their innovative and progressive music taste are producing a unique, refreshing space in the industry.  This artist showcase highlighted the versatility of their roster and the infectious energy they put out — a coveted skill necessary for a great party.  You can catch the artists this coming Saturday at the Echoplex in Los Angeles, highly recommended, and come ready for anything.