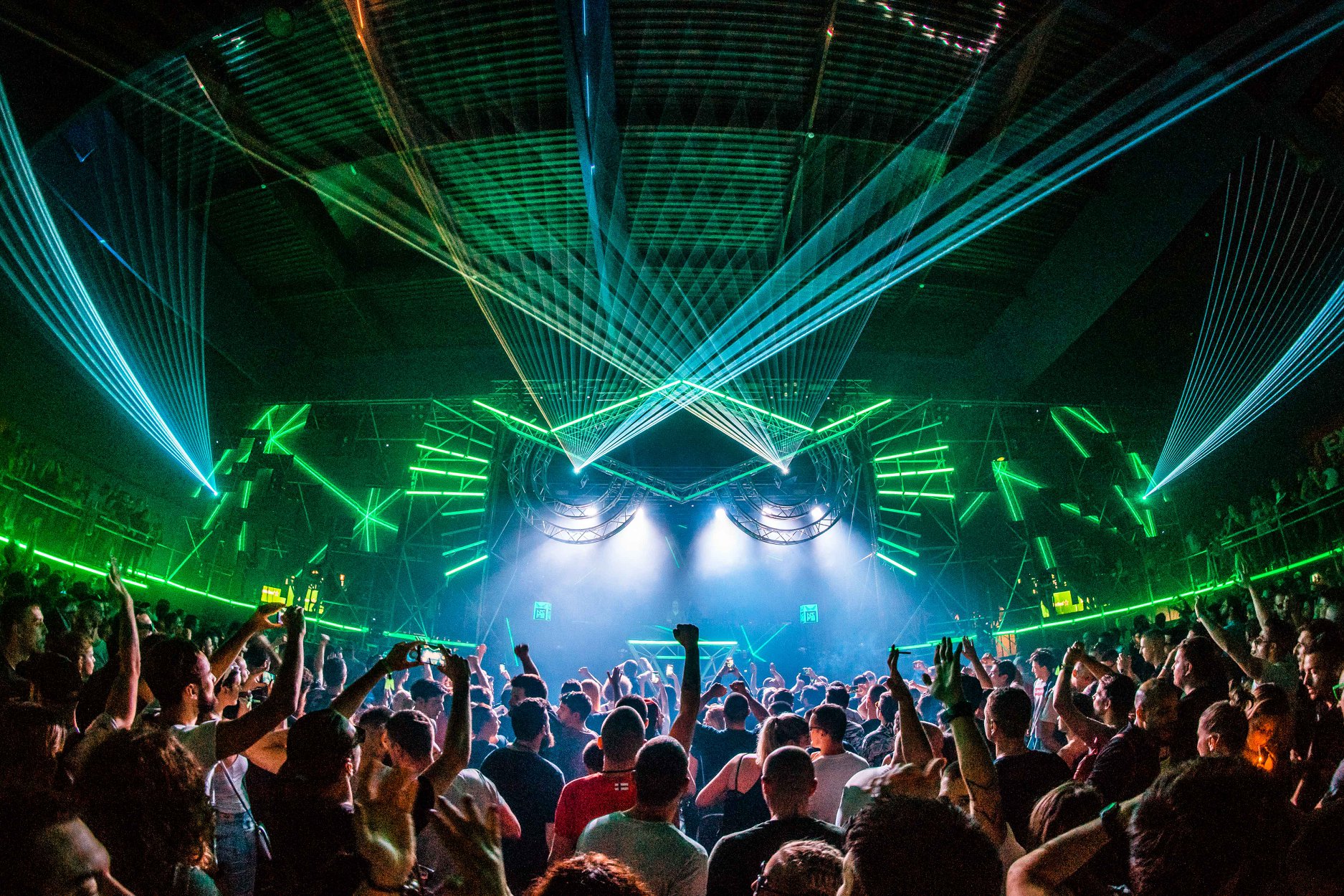 Fed up with the cold and gloomy British winter?

Well with Christmas right around the corner, we are all waiting eagerly for some time off to spend with family, but most of all to party. And this NYE is certainly bound to be a big one as we say goodbye to the last decade and head for the 2020s. 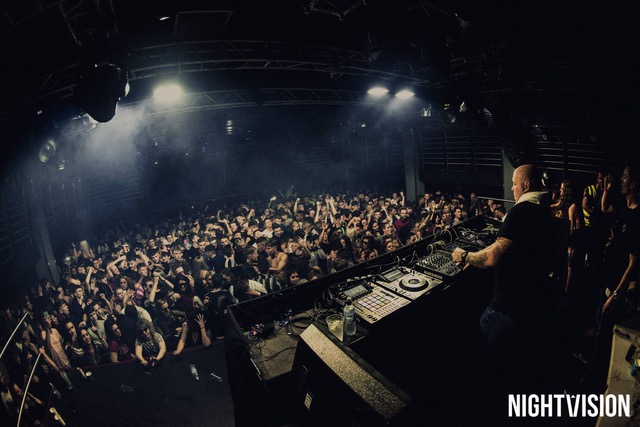 Nightvision is back to take over Edinburgh Hogmanay with undoubtedly the biggest and best Scottish line up going to bring in the bells, Nightvision will see in the New Year with a world class soundtrack from 2 of the biggest artists in the world of house and techno masters…PATRICK TOPPING and ALAN FITZPATRICK

Nightvision are the brains behind the internationally known and eagerly anticipated TERMINAL V FESTIVAL. Choosing Liquid Rooms to house their Hogmanay club was an easy choice, clocking up year 5 in a row. Liquid Rooms is a firm favourite with local house and techno fans due to its long standing main room and large warehouse space below.  Expect a laser precision attention to detail, killer increased sound systems being installed and mind-bending lighting shows.

Patrick Topping will be serving up a blend of tech house delivered in his unapologetic and Titan style. Having recently launched his ‘Trick’ label/brand he is undoubtedly one of the most in demand acts to come out of the UK for a very long time.

We Are The Brave, Drumcode and South Coast Techno Boss Alan Fitzpatrick, king of drums and synths joins the headline bill, alongside Elliot Adamson, a production wizard and expert in all things acid, disco edits, deep house and sci-fi techno! Ronnie Spiteri , Frazi.er and Stephen Brown complete the line-up over the 2 main rooms with an array of fresh local talent completing the huge line-up of talent.

The Liquid Room venue has recently been redeveloped, with two new rooms on top of the main upper room + lower warehouse room, meaning there is even more scope for different vibes and immersive atmospheres that will make the event unlike any other. The historic venue itself is in a 19th Century church in the Old Town area of the city, with two floors and a balcony that overhangs the main dance floor making it an intense, cauldron-like vibe.

This will be the most essential way to see out the old year and welcome in the New Year as Nightvision offer up another memorable night on the dance floor. 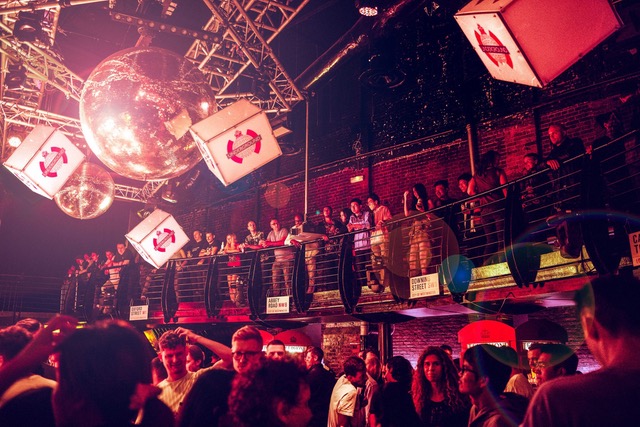 The last time Hannah took to the decks in The Box we had a complete roadblock, so be sure to get your tickets early for this one. Hannah was here back in March and her performance is one of the best The Box has ever seen. She’ll be bringing that hi-octane bass-heavy energy back again this December to ring in the new year and she’ll be bringing a heavyweight lineup of friends with her. Don’t sleep on this one!

Rounding out our trio of top-name talent is a very exclusive top-secret special guest, stay tuned for this absolute fire announcement.

Fast-rising superstar ALISHA will be making her MoS debut, while Barely Legal will be returning with a multi-genre bass-a-thon. Rinse FM’s Emerald will be making a welcome return to the club, while Just Geo will be hosting a room full of dub-wubbers with the one and only Plastician. Burger Fries 1,99 will be bringing the smoothest House and Disco selections, while Fat Tony will have everyone on the floor.

And as if all that wasn’t enough, Klose One, Jess Bays and The Menendez brothers will be playing non-stop party bangers. 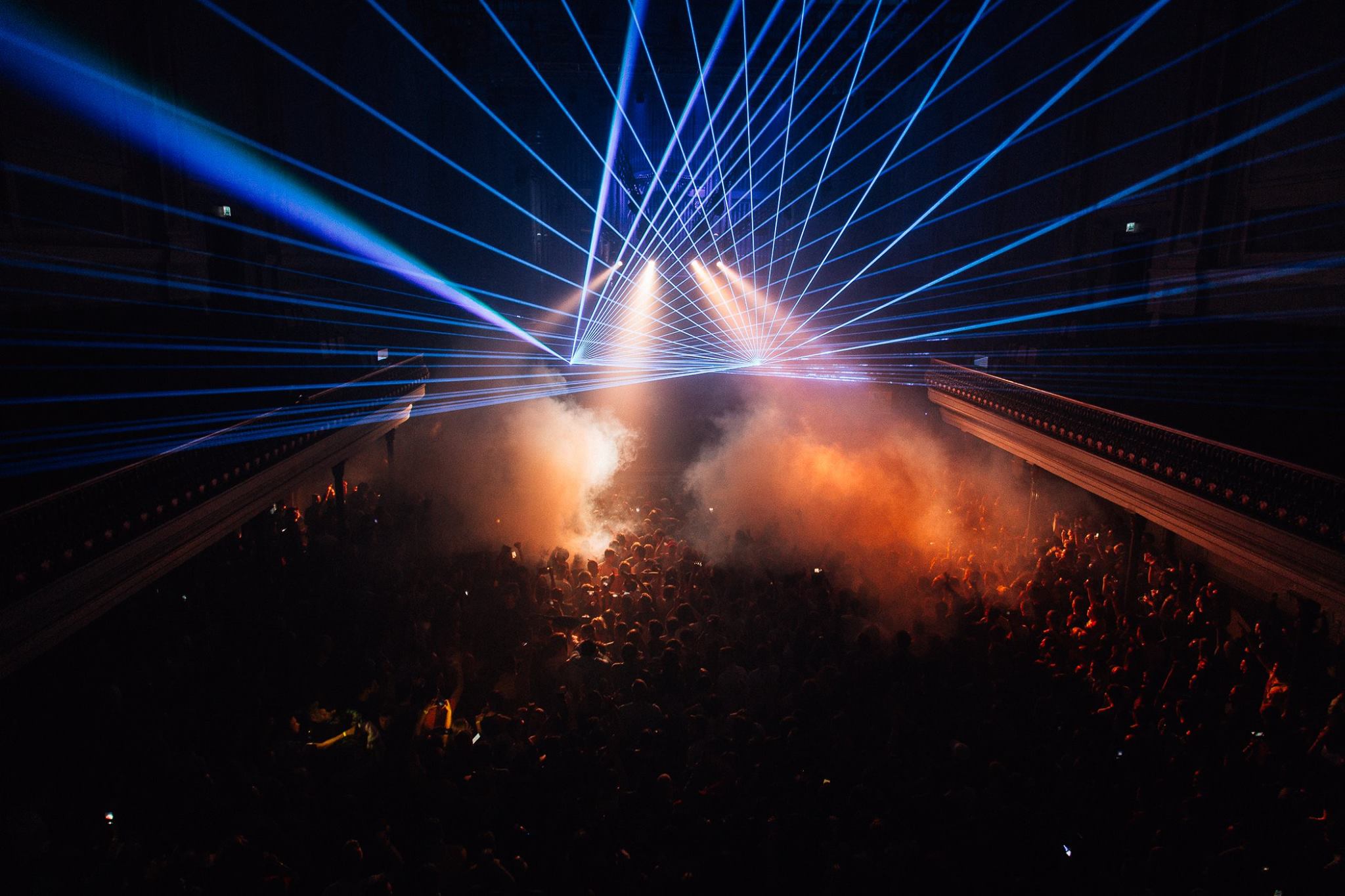 For NYE 2019, we’ve curated a lineup highlighting some of our favourite local artists, pulling together a mix of new exciting talent and some amazing crews!

Expect a full AVA Takeover, coming with our signature lights, production and a few midnight surprises – if you’ve joined us for our past 4 sell out NYE shows, you’ll know you won’t want to miss this one…

Joining the AVA crew to close out 2019, and move into our 6th year we’ve got a cracking local lineup. 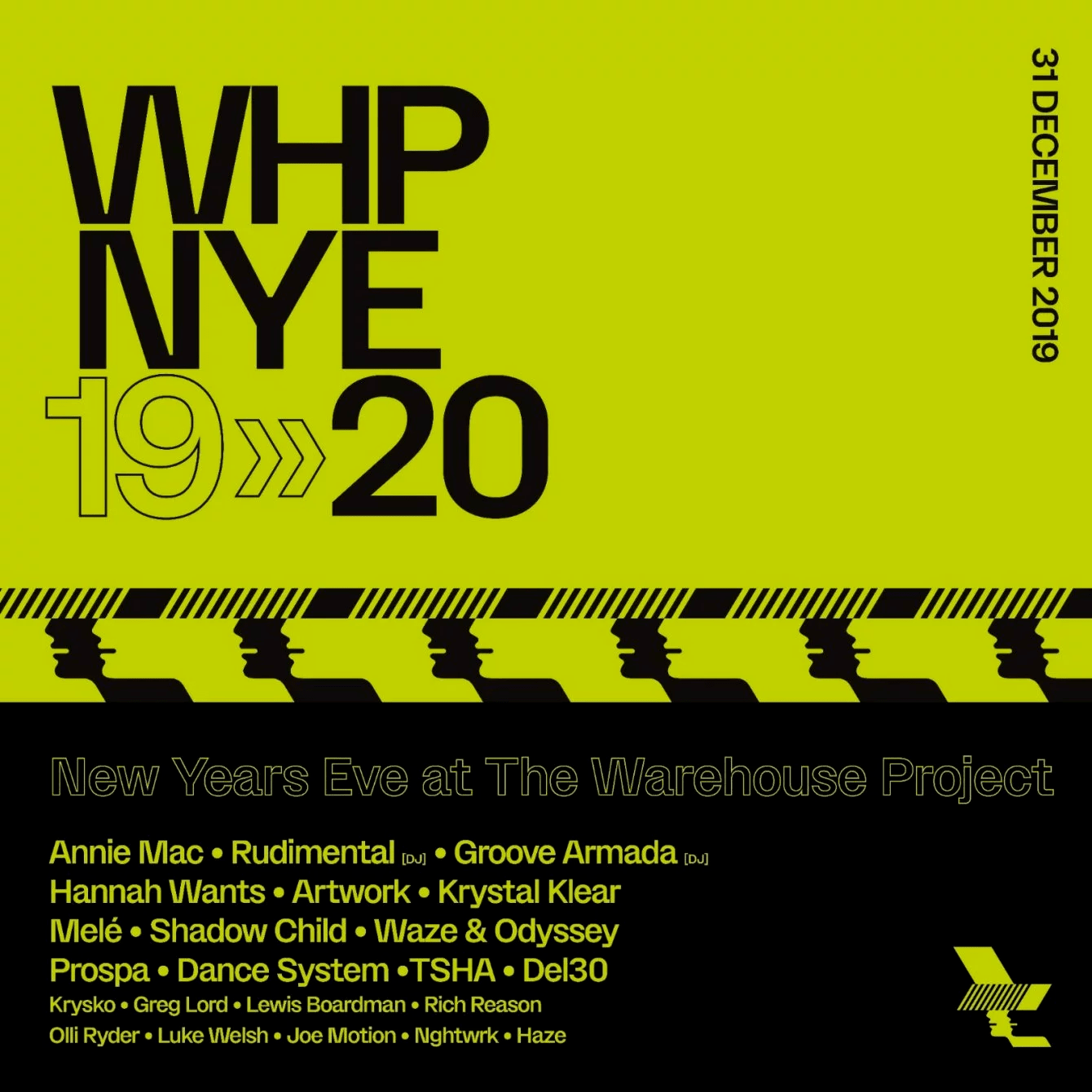 The Warehouse Project will see in the new decade with a New Year’s Eve celebration at its new home, Depot. The brand has enlisted a host of favourites including Rudimental, Annie Mac, Groove Armada, Artwork, Mele and Shadow Child to play sets that for the New Year’s crowd.

The 2019 season has been The Warehouse Project’s biggest yet, with the 10,000 capacity Depot ushering in a new chapter for the Manchester club series. Highlights so far include a phenomenal b2b set from Skrillex and Four Tet, a special curated live show from Aphex Twin, a live performance from Hacienda Classical plus a huge drum & bass takeover featuring Chase & Status. Shows still to come include Boiler Room, Skepta presents, elrow and many more.

A limited run of £29.50 passes available for 48 hours from 10am Weds 30th, with prices increasing to £35.00 once these sell out. There will be further exciting NYE and NYD events still to be announced to close the year. 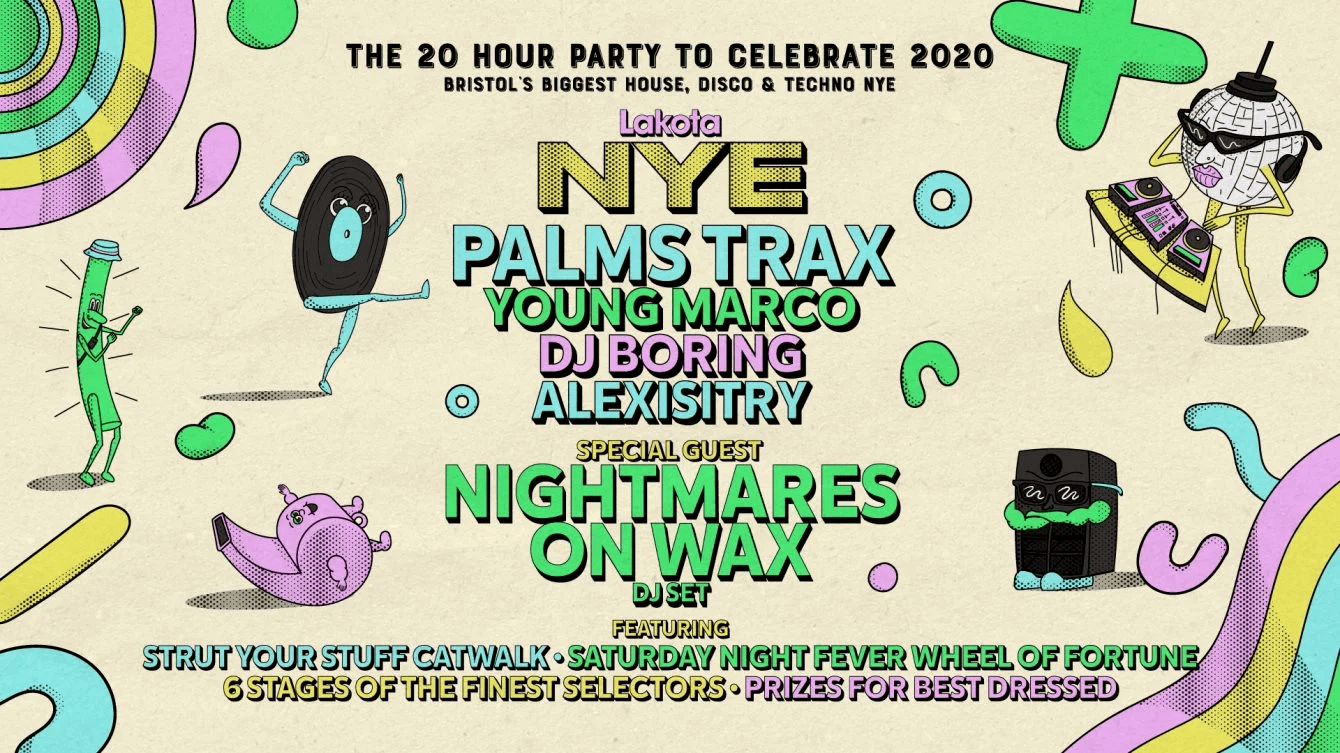 As 2019 draws to a close, we’re extremely excited to welcome you home for one last dance as the clock strikes twelve and a new dawn is upon us. We’ll be going for 20 hours, to celebrate the year 2020.

Armed with a battalion of groovers, shakers and expert party starters including Palms Trax, Nightmares On Wax, Young Marco, DJ BORING and more, there’s no stopping us as we take you from day into night and back into the day.

Supported by some of Bristol’s finest brands including Viva La Disco, Dropout Disco, Bristol Disco Fest & Utopia Presents, each space will have it’s own unique identity and soundtrack to ensure you don’t stop moving until the lights come on.

The party kicks off at 5 PM in the beer garden setting the groove for the evening’s proceedings. At 10 PM, we venture into a new world indoors with a full club transformation for one night only and artists of impeccable quality supplying the vibe. As the lights come on inside, we return to where it all started with an early morning soireé in the beer garden, with free sunglasses available, espresso martinis and bloody mary’s for all and plenty of room on the tables to dance ’til bed calls. 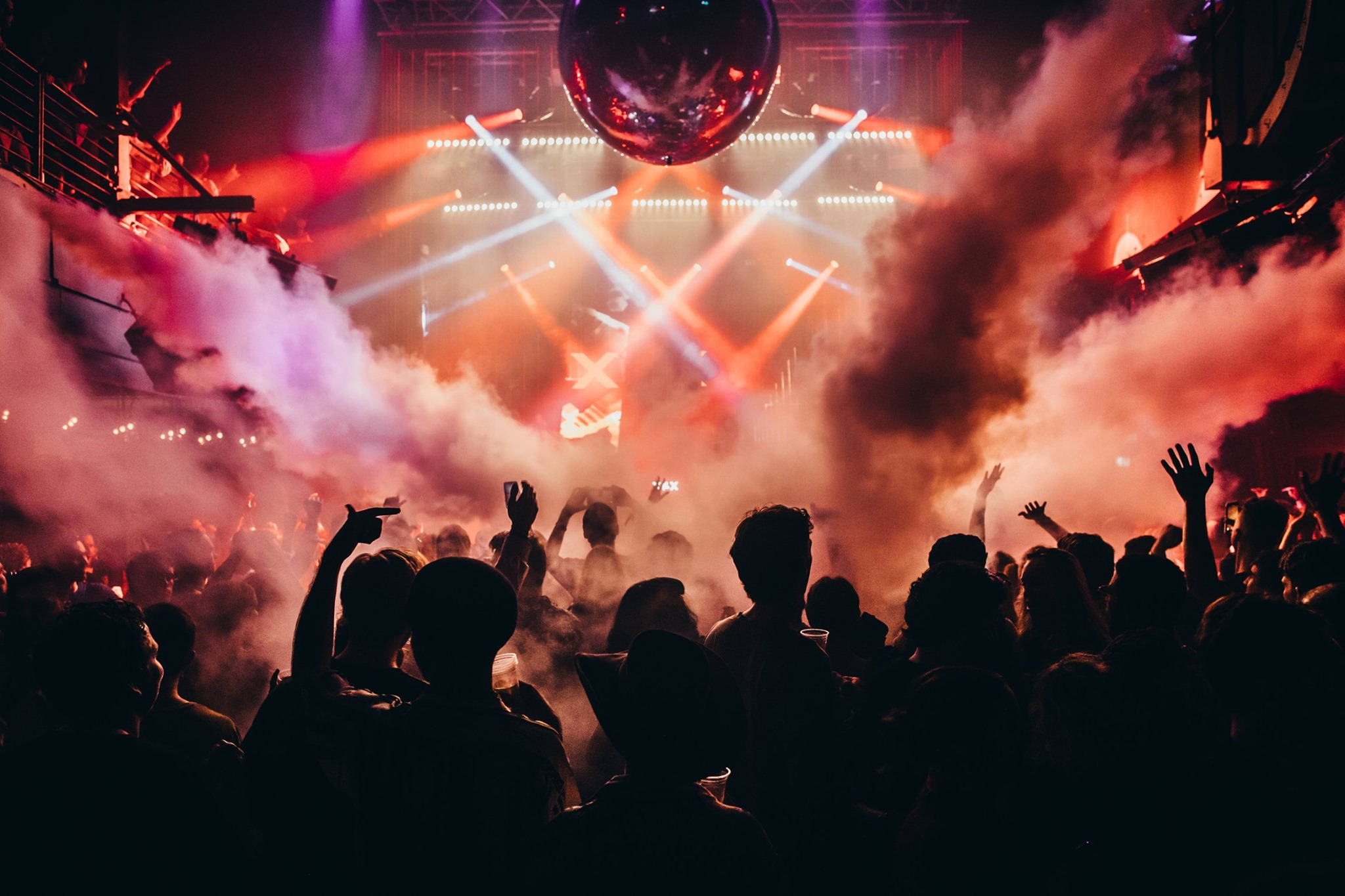 We close out 2019 with a fitting cast of house and techno heavyweights. In Room One, we welcome back Kölsch, whose melody-powered house anthems have made him one of Kompakt’s key figures. He also runs his own label called IPSO, where he frequently collaborates with some of his closest peers. In recent years he’s become something of a regular fixture with us in Farringdon, championing his signature style of 4/4 through his killer late-night performances, as well as his excellent mix for our label series, fabric presents. He’s joined by Joris Voorn, the Netherlands artist renowned for his polished style of house and techno. Voorn’s signature sound comes to life in his epic DJ performances, where he displays his grip on melody via his expansive collection of modern techno cuts. It’s something we’re used to witnessing here in Farringdon, but outside of the booth, he’s also known for showing the same distinctive spirit through his productions on his label, Green. Room One is finally rounded out by a lauded selector known for his deep collection of technoid house fusions, our founding resident Terry Francis.

In Room Two, we host a session of tough techno from some of the sound’s very best practitioners. Ostgut Ton champion Ryan Elliott returns, displaying the bag of deep four-to-the-floor records and surgical mixing prowess he regularly brings to both floors at Berlin’s storied Berghain/Panorama Bar club. He’s joined by Kangding Ray, the experimental artist whose work can be found on imprints like ara, Raster-Noton, and Stroboscopic Artefacts. The bill is completed by an artist whose driving approach to techno is now synonymous with our Room Two space, our resident Jay Clarke.