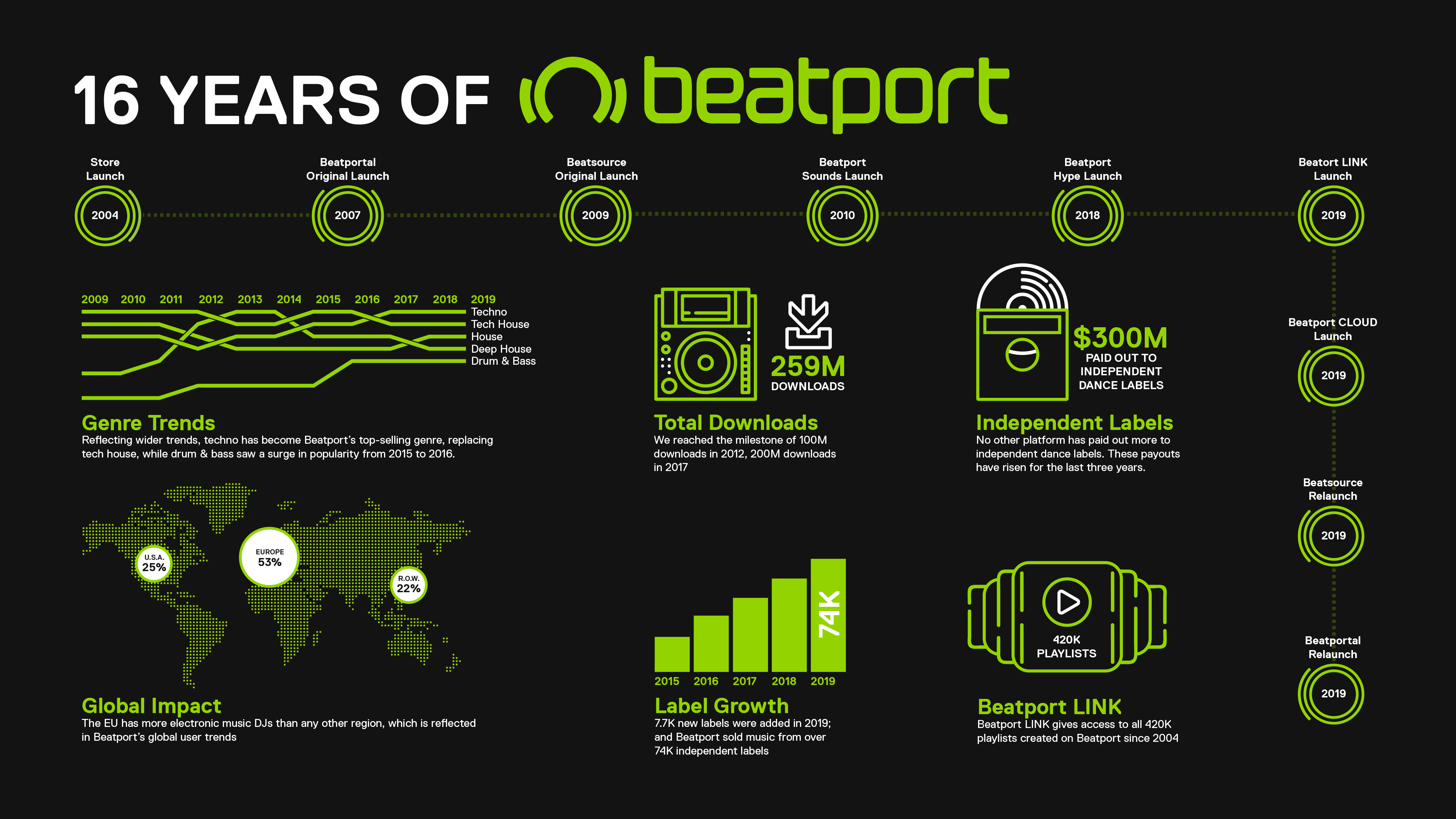 BEATPORT LOOKS BACK AT 16 YEARS OF ACHIEVEMENTS

Beatport just capped off another incredible year, and to celebrate, the world’s largest DJ download store is looking back at its major achievements, the year in trends, and its unwavering commitment to advancing the global dance music scene. Beatport is also looking back at the best selling releases of 2019 with the Best Sellers 2019 campaign, which highlights the top-selling tracks, compilations and DJ charts on the store last year.

Since launching in 2004, Beatport has paid $300m to independent dance music labels — with over 259 million track downloads on the site. Beatport’s success is intertwined with the success of independent labels, and Beatport is proud to say that these payouts have consistently risen for the last three years. In 2019, Beatport also sold music for 74,000 independent labels. But that number continues to grow exponentially, and last year alone, 8,028 labels joined Beatport, while 589 artists reached number one.

2019 saw the launch of Beatport LINK, the world’s most complete streaming platform for DJs, which allows users to stream any of the 9 million tracks available on the Beatport store directly to their DJ performance software. However, the launch of LINK Playlists late last year was a game-changer, giving users the ability to add curated content from the world’s biggest artists, clubs and labels. And in 2019, 420,000 unique playlists were available — though that number is continually growing. Beatport LINK is steadily opening up a new era for DJing, and is a major step towards changing how music is performed in clubs.

Beatport’s CEO, Robb McDaniels, commented, “It’s been a ground-breaking year for Beatport. With the launch of LINK and our continued success as the world’s largest DJ download store, Beatport is moving into 2020 stronger than ever. The global DJ community is going to see innovative tools and services coming from Beatport in 2020 as we continue to evolve our company.”

Founded in 2004 as the principal source of music for DJs, Beatport is today the worldwide home of electronic music for DJs, producers, and their fans. The Beatport Store offers music in premium digital formats and provides unique music discovery tools created for and by DJs. Each week, Beatport’s music collection is refreshed with hundreds of exclusive tracks by the world’s top electronic music artists. Beatport has offices in Los Angeles, Denver and Berlin. Follow us on Facebook and Twitter and Instagram.