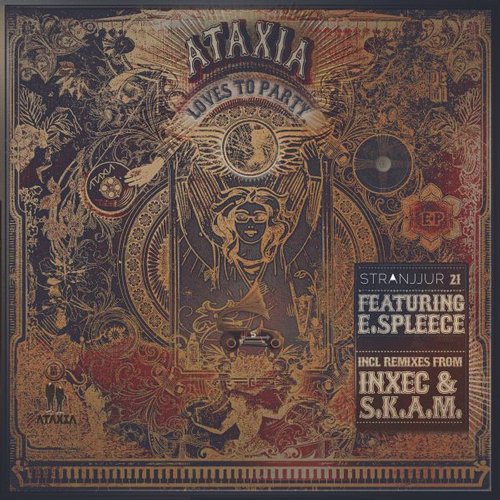 Following massive debuts on Culprit and Leftroom’s (LEFT’d), Ataxia now make their debut on Brooklyn’s Stranjiur Imprint in collaboration with fellow Detroit stalwart, Eric Spleece aka E.Spleece. The trio come forth with their underground floor burner, aptly titled “Loves to Party”.  Already making waves and getting played by some some of the biggest DJs in the industry, this dance floor ready tune has been crushing it in clubs all over the world.

Ataxia’s original mix leads with an elasticized bouncing bass pattern that keeps the floor locked and loaded for the intoxicating breakdown that fills the room with good vibes, using some memorable recordings from the ridiculous world of U.S. Pop culture along with swirling pads and keys that help to keep the groove on the serious tip and bring the energy level up a notch once the addictive bass line settles back into motion at the cut’s crescendo point. On the remix tip, the highly sought-after skills of Inxec and S.K.A.M.  Inxec delivers not one, but two amazing remixes.  His ‘After Party’ version is one to keep you moving and grooving, while his ‘Prinking’ version is dark and driving.  S.K.A.M. is an artist we all know and love and he brings the goods with his crunchy remix.

With a load of different versions to choose from, “Loves to Party” is sure to be a goto weapon of choice for most DJs and you can expect many to carry it in their arsenal.  Another strong release from , expect some more big tunes from this label later in the year.