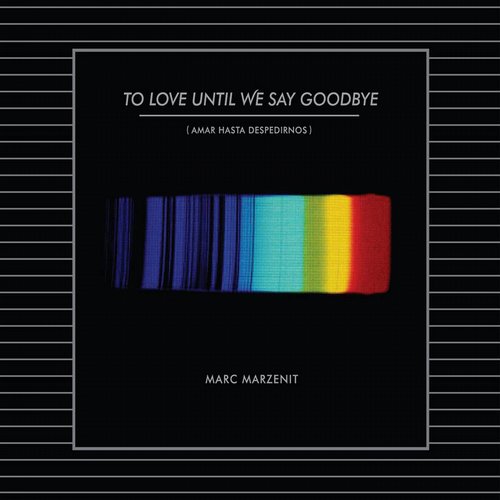 Spanish techno maestro Marc Marzenit has woven a history of love, loss and sound into a beautifully conceptual debut LP to round out the year. “To Love Until We Say Goodbye” features expressive, emotionally charged selections that are best understood as a listening experience as each track transitions consciously through the next. Marzenit is an interesting and passionate artist whose work immediately struck us and we are so fortunate to get to know the man behind the music <3

Hello Marc! Thank you so much for connecting with us. We are eager to get to know you and gain some insight into “To Love Until We Say Goodbye.” What have you been up to in recent months?

First of all thank you so much for this interview, I’m so happy to share thoughts with you guys.

I have been really busy finishing my debut album, it took me more than two years to finish the music production and at least two months more for final details. It has been a pleasure nightmare. Sometimes I have a perfectionist, auto-destructive side on me while I’m working…In the border line between a workaholic and madness.

We know you are from Barcelona, a city with such a vibrant energy! Tell us about your musical history and the experiences that shaped your dynamic sound palette…

I don’t live in Barcelona anymore, I moved out to a small city about 1 hour north call Mollerussa. I needed some rest from the craziness of a big city. But I was born in Barcelona, and I lived there for so many years. It has a special vibe that you just don’t find anywhere else. Without doubt one of my biggest musical influences has been Sonar Festival in Barcelona. It’s not the typical festival where you just go party, Sonar is a cultural concept were music and art can interact between them. I went there for the first time when I was only 15 years old, and I felt in love with the festival just at the first second.

“To Love Until We Say Goodbye” is your debut full-length album after producing techno for almost a decade with prominent labels like Cocoon and Bedrock. What was the turning point that inspired you to create a full package?

I didn’t want to make an album with just a pile of tracks without any concrete connection between them. I always loved the conceptual albums like Pink Floyd did, where all the songs have a strong connection between them and all together made a solid statement. So I waited the moment to have a clear message I wanted to give. And time arrived two years ago when in some point of my life I realized that you sometimes don’t appreciate a lot of things you have in your life until you lose them, and I mean friends, relationships, cities, experiences… At that exact moment I decided I wanted to do an album.

Well, it is absolutely beautiful, poetic and emotionally provoking, described as ‘conceptual techno.’ Can you enlighten us on the profile behind this style?

I don’t think there’s a unique style behind it, it could sound as a compilation of different artists of different genres with a mutual theme. My profile as an artist is really diverse, if you take a listen to my whole discography you quickly realize how many different styles I’ve done. This album I think is the result of my personal growth as a musician and as a person. This is the reason there’s a lot of emotional content on it.

The songs all flow so gracefully together with a natural ease and seem to tell a story. In an industry that thrives off of individualized tracks, was the notion of an extended, authentic listening experience important to you while creating the package?

Thank you so much!! That’s a nice feedback

This album has not made on the way the recent electronic music scene works. Without doubt this is the highlight of the album, to tell a story with music and escape of individual works when doing single tracks or remixes. Even some recent albums when you listen to all the tracks, you get the impression all have the same rhythm pattern and sound, and this is something I definitely wanted to avoid.

There are some intriguing samples woven throughout, I especially love ‘Melancholy Street’ into ‘Venice Dreams.’ Where are the cuts from and what kind of personal significance do they hold for you?

All the samples between songs and street noises are taken from my personal life, they are totally real and have been recorded by myself to capture important moments on my life. The samples before “To Love Until We Say Goodbye” are the last moments I was with my ex-girlfiend in Paris. I knew it would be difficult to see each other again, so I decided to capture that moment with sounds. Just after that track the sounds on “Melancholy Street” you can listen when I left her and I walked to the airport to go back home. “Venice Dreams” are sounds recorded at Venice Beach in LA when I played the there last time. I recorded that sound when I was with Henry chatting about life in a super inspiring tour we did together.

Henry Saiz is a talented, innovative artist and by listening to both of your sounds, it would seem you are kindred spirits. How did you two connect? Why did you choose Natura Sonoris to represent this milestone in your career?

We met in Barcelona about 8 years ago. I was looking for people to release on my label “Paradigma Musik” and a mutual friend introduced us. Since the first moment we connected perfectly as musicians and friends. The reason I released the album on Natura is because I wanted a label that allowed me freedom to do everything the way I like, going from music to design. As we said before, this album is made with a lot of care and love and does not have the profile of the recent music industry. So I needed a label that really believed in the album and treated it with love, and that was definitely Henry Saiz’s label.

Overall, what message or story is narrated through your album?

Love everything you have in your life, don’t wait to lose them to realize how much you love them. It’s really typical in this actual society. Everything goes too fast, you sometimes don’t find a moment to stop and look at what surrounds you, I bet you it is full of many great people, places, memories, feelings and a lot of things that you sometimes don’t appreciate.

When listening, you can sense the passion and imaginative intent put into each note. It is truly a work of art and we appreciate your time and artistry! Thank you so much again and we hope to see you in California someday <3

It was truly inspiring your interview.  I had the impression you guys really understood and feel how the album was made and that’s something I really appreciate a lot. Thank you so much and I hope to see you in California in January