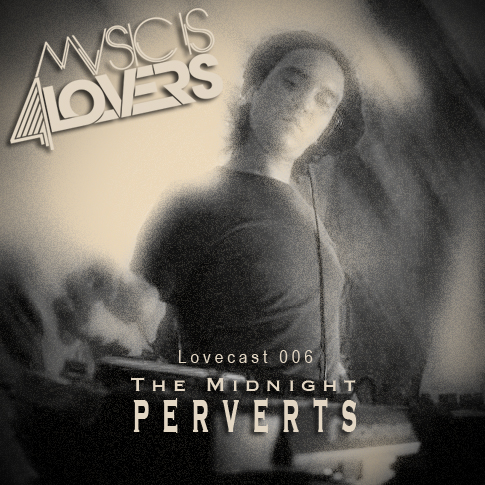 [Artist Profile / Lovecast] Romeo Ulgalde, aka The Midnight Perverts has been pumping out tunes through his label Neim Records for just over 2 years. In the last year or so, Neim has been responsible for some of the hottest tracks out boasting artists such as Wildkats, Alexis Raphael, Balcazar, The Midnight Perverts, Tboy, Pinto, Jay Haze, Sean Roman… the list goes on. Ever since we started hearing their music about a year ago, we’ve been fascinated with their incredible consistency and ability to create releases with up-and-comers that rival the heavy-hitting big dogs. In this exclusive interview, we find out more from the producer/DJ/label boss about how he got his start in music, tips for aspiring producers and and the record that changed his life. In addition, the 6th episode of our Lovecast series has been provided by The Midnight Perverts and is straight fire if I do say so myself. It includes many forthcoming tracks from Neim and their artists so keep an eye out for these tracks over the next coming months.

Interview with The Midnight Peverts:

I was born in Tucson, Az, then at an early age moved to Guadalajara where I was raised. When I was 20 or 21 (can’t quite remember) after dropping out of college, I moved to Miami & lived there for like 7 years. I realized that Miami actually sucks (I even dedicated the city a track,  it got signed to Get Physical haha) & finally got back to Guadalajara like 3 years ago.

My mother always tells me that I used to rock out when Michael Jackson was on the speakers (Thriller album rocks), also I remember the Bee Gees sounding loud; I’m sure that was a big influence on me. In early 90s was when I was introduced to electronic music listening to Orbital. Since then there was no way back. I tried to start producing but equipment was too expensive for a 16 year old; then I remember messing around with Rebirth (which I couldn’t ever figure out how to sequence a track on, it was too complicated) & the very first version of Fruity Loops back in 98 or so (which was the very first time I could develop a track, of course it sucked). Then Reason came out & that’s when I met Marco Balcazar (I always thank him for teaching me most of the stuff I know), I remember he tried to sell me a copy of it or install it in my computer for a high price but then I think he agreed to give it to me for free. Then I messed around with Ableton 1 when it came out, I started Djing with it (yes, way before Sasha did it :P); finally when it got midi I stopped using Reason. S.Junkes was in form along with Balcazar & Pinto developing a live PA; we rocked out a couple of times but never really went far with it. When I moved to Miami & we kind of split up, that’s when The Midnight Perverts was born. How I got the name I don’t have a clue. I then started doing my Live PA going solo, got a couple of gigs in Mexico & in the U.S. After realizing that it was a pain in the ass to carry on with all the equipment by myself, I decided to learn to spin & haven’t played live since then. (woaaa I just realized this answer was more like a mini biography ).

Guadalajara is pretty strong, lucky for us we have Bar Americas (where I’m a resident), one of the most recognized clubs in Mexico, if not the most. Locally we have artists like Luis Flores, Cubenx & Balcazar that are doing great right now.  Overall Mexico is getting a lot of attention right know, especially Louie Fresco and Balcazar & Sordo. I think they are going to be huge in 2012.

Initially I went to Miami to study to become a Chef. It’s actually something I didn’t do at all the whole time I was there! So, practically I started making a living as a DJ when I moved back to Guadalajara. In Miami, I wasn’t spinning enough and sometimes not even getting paid. Unfortunately for me, I lived in Miami when minimal was popular and I had my house thing going on… not many people were feeling it.

I like both, sometimes my tunes get too weird & having another brain always does the job. Watching how other people work is always fun too. You learn a lot from it. Also it’s nice to mess around with other peoples tracks.

It’s very important. My hometown has been very supportive of my career & Neim got really good in the past 6 months just by clicking & sending emails. Now I think I’ve just gotten to the point where I need to go somewhere else to continue this journey… at least for a couple of months to meet some new people, it’s all about PR, you know?

Be very patient, sooner or later if you are good, you’ll make it. I put a 2 year hold on a tune till it got signed to Get Physical. But don’t think that people are gonna come knocking on your door.

Orbital – Halcyon, that’s the one that got me in to all this madness.

Best thing is always meeting new people that like what you’re doing (ego booster maximus hahah) but most important is that some of them end up being really good friendship. Also one of the best gigs was this past BPM on new years day, I was a bit nervous because I thought the venue wasn’t really for my kind of music… during the week only big names like Hawtin, Dubfire, Digweed where on the line up… but surprisingly people really felt my music, even some of the BPM promoters that didn’t really know me came up to the booth asking me how I was doing. They where really feeling the sound. There are a couple of videos on youtube, I always get goose bumps when I see them.

Worst gig ever was at Cd Juarez in the north part of Mexico. Some kids called SOS Corp booked me (yeah they paid my fee in advance but they didn’t pay my travel). From the start, this gave me a bad feeling because some guy named Ricardo Glomb from Tijuana had done the same exact thing. So, to give them a hand, I decided to fly there a day before because the plane was cheaper. The day came & place for the gig was really bad, there were no people there, the booth was shit, cd players didn’t work, monitor was shit. For the perfect finale, they disappeared without taking me back to the hotel or paying for the extra night & they left me without my flight back to Guadalajara. I ended up paying around 400 usd for my flight. Such a good time…

We have a couple of a lot of stuff coming out in Neim, EPs from Cesar Coronado, Tboy, Beep Dee, Amine Edge, Newbie Nerdz, Will Crawshaw & Kasbah Zoo. News about myself, so far I’ve made like 6 remixes, they will be released during the year. An EP for Overall music came out in March with remixes from Franck Roger & Terry, a new EP for Dame Music & hopefully I will finish my EP this year. Also I’m looking forward to collaborations with Amine Edge & DANCE and Balcazar & Sordo.

I usually start with a beer, then whiskey, then jager, then anything…