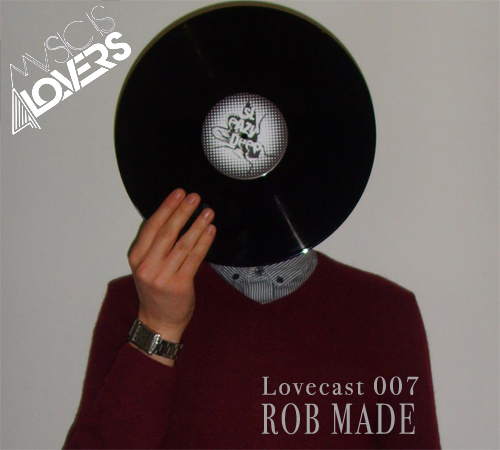 (Artist Profile / Lovecast) Being a self-Made man takes having a clear vision and smart goals, a tremendous stock of focus that can slice through steel, perseverance, drive, and patience that will make a punishing Siberian tiger flinch at the mere thought. It’s not easy. After playing in every club in the London vicinity under numerous monikers, Rob Made decided to take a step back and build something substantial, something to drive him to the next level of the industry; that something was Sleazy Deep, a record label focused on the “underground deep house funk”. Since the conception of the Sleaze, the label has releases produced by No Artificial Colours (a Mi4L fav), Rob Made himself, William Medagli, Sasch BBC & Casper, and the latest release from Max Belobrov. We’ve heard Sleazy Deep supported by a gapping array of top tier DJs such as: Maceo Plex, Seth Troxler, Lee Curtis, Alexis Raphael, WiLDKATS, Claude VonStroke, DJ T., Waifs & Strays, Death On The Balcony, and The Mekanism. Rob and company are off to a great start and we’re looking forward to watching him grow.

Below we have an exclusive Lovecast from Rob Made and interview to boot. He added in some forthcoming Sleazy Deep in there, or what Rob likes to call “Future Sleaze”, their first Various Artists release including tracks from Sound Gypsy, Havens + Hart, Finnebassen, and Gimenez. Peep it out Lovers!

Interview with Rob Made:

I’m originally from east London, Woodford Green. I grew up there, but have since lived all over London and am now in Blackheath South London.

I’ve grown up with many influences, with Pink Floyd being massive to me when growing up as my dad’s a huge fan! My sister got me into dance in the late 80’s and early 90’s, and I became a huge oldschool fan and loved drum & bass. That made me want to hit the rave scene from an early age which really opened me up to club culture.

How has it influenced your music and shaped you into the producer/DJ you are today?

It’s hard to say, I’ve had a lot of different sides to my production over the years, Rob Made is a culmination of everything I’ve learned; being self-taught takes time and getting to a level where your truly comfortable, however I feel like I’m there now. You can certainly hear oldschool references in my house music, along with the more current nu skool disco and deep house that’s become very popular. I do like to switch it up a bit.

In London? It’s buzzin’, there’s such a great vibe and the music and talent here is World class!

I’ve been playing around for years, but I’d say in 2007 as an artist called L.E.O. My first track was signed to Nic Fanciulli’s Saved Records which got essential new tune on Pete Tongs Essential Selection, so I’d say it got serious(ish) from there! I’d like to thank Nic and Jimpster as it’s his remix that really took the accolade

I wouldn’t say I’m professional or even made it yet, I’m still working 9-5 for Sony Music and paying my bills like everyone else. It’s all a bit of fun but as my passion it’s obviously something I want to do full time. I won’t ever stop believing that!!! I’m going to keep pushing Rob Made and the Sleazy Deep label and hope to get to a stage where we can take our sound around the World, like Hot Creations or Crosstown Rebels.

I like both, on your own you’re stuck in your ways so it’s nice to get an outside opinion to shake things up. I DJ’d for years on the London circuit as part of a DJ duo, 2’s Company, with my best mate Jay. He’s also involved in Sleazy Deep and took over duties of our earlier label called F*** House Music!

With the Internet and level of software these days you can be anywhere on the planet and make great music, so I don’t think it’s important at all. Although being in and around a thriving club cultured city can only help. It’s good to get out and support the nights/DJs you love which in turn can help you with networking :- P

Do your homework. Try to learn as much as you can from others around you. Don’t be afraid to ask questions and get your ideas from the music you love, study arrangements and tricks used by the peers that make you want to be a producer. Another great piece of advice is the use of EQ and mixing well, took me years to get around to that side of music making and I truly believe EQ is one of the most important factors. That with a strong passion for the music you love. One last thing would be to learn when to say enough is enough, knowing when to stop and finish a track is an art in itself.

There can only be one album for me to mention here as it’s what got me into house music in the first place, Northern Exposure by Sasha and John Digweed. This amazing compilation made me want to DJ which in turn led me to production.

What are the best things about being on the road?

I’ll let you know when I start touring! Haha

Being away from family and friends, not that you don’t meet amazing people along the way :- P

Best moment on the road?

We did a small tour of three major cities in Poland, it’s an amazing place and they really love their house music!

Lots! We have our 6th release forthcoming on Sleazy Deep and it’s a special one! I’ve sat on so much great music and talent that’s signed up for the future; but I just can’t wait that long to introduce some of the amazing producers we have lined up, so our first V.A. was born, Future Sleaze. It’s set for a June release with 17 exclusive tracks from the likes of Finnebassen, Dan Styles, Myself, Jouhl, Pssh! and many more! So pretty hyped about that. As Rob Made I’ve just finished an original for a new label Resonance and also working on a great remix for our friends Electronique, it’s called Let Go and is on my Music 4 Lovers Lovecast. Gig wise be sure to come check me out in June for Lovebox, I’m playing the Fight Against Knives arena on the Saturday and might even have a special P.A. Lined up…

Sorry I’m gonna be boring here! I’m a true Brit and just love my beer. Give me a nice ice cold pint of Sagres anyday :- P