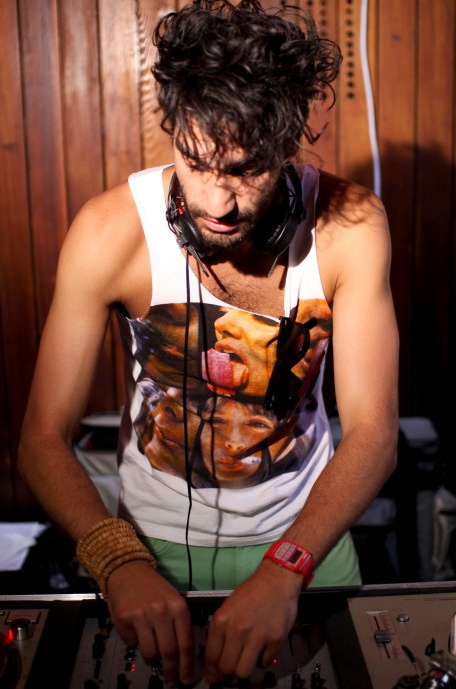 [Artist Profile] Johnny Mikes is a London native who grew up listening to everything from ZZ Top to New Kids on the Block.  With a wide range of influences and a long-standing passion for electronic music, it’s no wonder he has become a fixture of the UK party scene and a talented producer with an ear for the nuanced.  His latest EP, Defining Horizons, highlights his influences and showcases his ability to create grooving, diverse, stand-out sounds. A little electroboogie, a little 80s synthpop, a little deep house, the work is fit to elate any disco dancer.  Mi4L caught up with Johnny Mikes for some insider info on his experience, music and plans for the future.

Well, the music scene growing up for me was really varied. My Dad would be listening to Diana Ross, Donna Summer, Chaka Khan, Michael Jackson and on the other end of the scale Status Quo and ZZ Top. I remember he would also have loads of hits compilations with a really broad spectrum of 80s music. My sister who is a couple of years older than me was listening to the likes of Bros, Madonna and New Kids On The Block.

I had an early interest in Michael Jackson, Salt ‘N’ Pepa, Rebel MC, then onto artists like Vanilla Ice, Snow and Shaggy, Warren G, Wayne Marshall; the list goes on. At the same sort of time I discovered dance music, early introductions were Nightcrawlers then I and was introduced to compilations like the House Collection 3 mixed by Jeremy Healy & Alistair Whitehead and The House Collections Club Classics 1, 2 and 3.  I was also really into the pirate stations that featured happy hardcore and then from this I got really into the drum & bass Jungle sound. Couldn’t get enough of a tape pack that featured DJ Hype, Mickey Finn and their contemporaries.

All of the mentioned above have really been huge influences on me as a DJ and producer, especially the 80s music that my Dad and sister were listening to. You can really hear these influences in all my sets and the music I’m producing. The dance compilations really opened up my eyes to something fresh and new but the biggest influence for me that made me realise I wanted to be a DJ was the Ministry of Sound Annual 2 compilation mixed by Pete Tong and Boy George. Both CD’s completely blew me away.

The music scene is amazing. Living in London is a musical blessing. We are spoilt with talent and amazing record labels. At the forefront of things you have labels like Murmur, Hypercolour, Hot Natured and Lower East, to name a few, all doing their own unique thing. The DJs are world class and the parties are insane. We are super spoilt with parties like Creche, Lo*Kee, Mulletover and You Are We.

I would have to say probably this year. I produced in the past but I am so inspired right now. I think having the right people, influences around you is really important and it feels like all the ingredients are there right now.

Both, I love working as a solo producer because you can really push things and express your sounds, but also love collaborating. The buzz in the studio when you all bounce off each other and things quickly fall into place is incredible.

I’m currently working on collaboration with Michael Jansons and Gav Memnos and starting a new project with Dexter Kane in April, so lot’s going on, on the collaboration front.

We live in such a global community where we are all so well connected through Skype, Facebook, Soundcloud and the internet that your music can reach people all over the world so I don’t think it plays that big a role. I’m very fortunate to live London as it is so central to music and meeting like-minded people is very easy.

Try not to follow musical trends and be true to your own sound.

I couldn’t pinpoint a particular record or song as there are a few but one that comes to mind is Bill Withers ‘Ain’t No Sunshine’. It’s pure magic.

The diversity of crowds and people you meet is incredible. You can’t beat being on the road with friends. I remember playing in Poland once and I ended up getting dragged to an after hours party, djing there and partying away with an amazing friendly crowd. It was one of the most amazing parties. I got so wrapped up in the moment that I just made my flight. My friends had to pack my bags, get my passport and meet me at the airport with moments to spare. Good times.

My worst moment would probably be getting too drunk to DJ. Myself and Cozzy D were DJing at Underwater and I got so drunk that I remember sitting on the floor in the DJ booth with my head between my legs with minutes to go before having to play. Cozzy D luckily played the first half hour or so on his own and then I managed to pull myself together. I was really young and unprofessional at that point and I definitely don’t advise any aspiring DJ’s to go down that route.

I’ve just finished a track called Crowd Control, which is super experimental so it’ll be really interesting to see dance floor reactions when it’s released in June on Lower East.