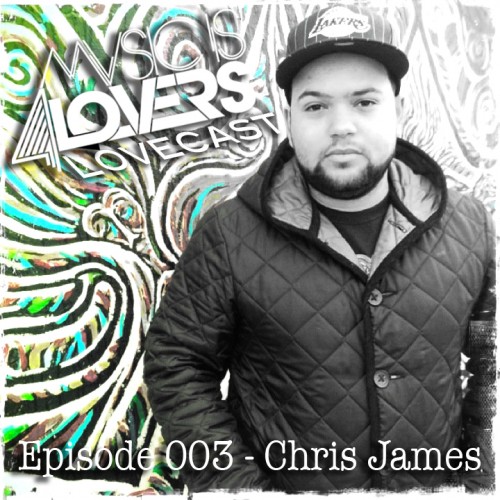 [Artist Profile] It has been quite a year for Chris James and we feel his 2012 will be even more prosperous. As half of Coat of Arms and label boss of DubNoir, in addition to his solo work, Chris is armed to continue his skyward trajectory. With unquestioned support from so many greats such as Claude Von Stroke, Jesse Rose, Derrick Carter and Catz n Dogz, to name a few, Chris has certainly grabbed our attention as we are sure he has captured yours as well. We have asked a few up-and-comers this year for exclusive guest mixes and we have seen them all climb charts and rise in popularity thereafter (we like to think it’s because of us, but of course, they were destined for it already). Similarly, we expect only forward motion from this producer/DJ/label boss and we are sure that is exactly what we will see.
Lovecast Episode 003 – Chris James – [Musicis4Lovers.com] by Musicis4Lovers

I am a born and raised brummy, for those that don’t know what that means, I’m from the 2nd city; Birmingham, UK (About two hours north of London). I currently live on the outskirts of Birmingham, in a place called Solihull where I have been for the past year or so.

I was hugely influenced by what my mom played on her turntable (no she wasn’t a dj) but before cd’s, mp3’s etc the number 1 medium was vinyl, and she had tonnes of the stuff. The music I remember mostly was reggae, 80’s music, artists like Bob Marley & The Wailers, Shaka Khan, Teddy Pendergrass, The Rah Band etc. In my early teens I was a huge rap fan, Wu-Tang Clan, Biggy, Mobb Deep and that’s when I first started making music, messing around making hip hop beats in programmes like Ejay. I then went to Ibiza, aged 12/ 13 and met a guy who did a house tape, which heavily influenced me into getting a pair of decks and a mixer. I started playing and making Trance with a few tunes getting signed and getting plays from djs such as Judge Jules. I kind of grew out of the trance phase, at about 20/21 and then started on house. It’s only really the last 18 months or so where I have felt happiest with what I’ve been doing.

Its ok, I play at a club called Face, here in Birmingham. Without this place I doubt there would be a scene, unless something else started. They are the guys bringing great acts to our city, no doubt. Don’t get me wrong the best nights I’ve had or played at have been outside my city, either Leeds, Manchester, London. Birmingham does have a scene though of people dedicated to underground music, I just think it needs continually pushing here. I have thought about moving a number of times and still might as I really need to be somewhere where the locals and promoters look out for upcoming talent and use it to their advantage.

Tell us about your record label DubNoir. When did you start it and what was your reason for starting a label on your own?

I started it just over 2 years ago now, it was initially to release my own music, but then loads of artists that I knew well started sending me things and jumped on board. I wanted to just get an idea on running on a label and running with it, focusing on upcoming talent local and international. There was no specific remit with regards to what genre, just good quality house music. I’ve been thinking about starting a new label in 2012, but more news on that to come.

How do you go about choosing artists to release for your label?

The majority of tracks, have all been 1 track demos from artists and then we discuss doing 3 tracks eps. I do approach remixers for the label and we’ve had some great artists remix for us including the likes of; Tom Flynn, Bubba, Edu K, Prince Club, Act Yo Age & many more. I think moving into 2012; we will look at hopefully bringing in some big name artists for originals and remixes.

How long have you been producing?

I started messing about with programmes like ejay, when I was 12-13 years old, but not making dance, more hip hop based stuff. So I would say really that’s where I learnt how to put loops etc together. Then I moved to FL, and haven’t looked back really. I do use Ableton quite regularly also, but I’ve never made a track in ableton, not yet anyways. I used to use VST’s all the time when I first started out, but then switched to audio for a number of the last few years. Its only recently I’ve started using them again, which is quite exciting.

To be honest I like both equally. Sometimes when working with someone else, it’s easier as you can bounce of each other’s ideas and influence each other. I have collabed with Eats Everything, Worthy & Deepgroove earlier this year and that wasn’t as easy though as you have 4 people all trying to get their ideas and sounds across.

Tell us about your project Coat of Arms.

Well it came about after I took a trip down to see Eats Everything at his studio in Bristol. We met here in Birmingham, last year as he was playing as a guest at a place I was resident at. We had already made a virtual connection as Dan sent me some music for my label about a year and a half ago. We both liked the same things at the time, and we both were on a slightly different path musically, moving from one phase to a more house typed records. We made one track as myself & Thieve, one of dans aliases. The record was cool, and I released it on my label, I then went back down again, and we came up with a new name, a new concept and hopefully a fresh take on the sounds we love. Mixing old with the new, big bass with melodies, also know to us as Bumpin House J.

Did you always think you were going to be a producer or even a record label owner?

Producer, yes, record label owner, no. It may sound like a cliché and everyone says it, but Music makes my world go round. I love other things such as football, women, alcohol, fifa, candles, but without music, I don’t know what ild be doing. In all my school reports, it said, “If Christopher put as much effort into sneakily listening to music in class, with his work, he would be a top student”.

Me owning my own label has only come about due to the internet, which for me has been a great think and for many others that you listen to today. Yes, there is a lot of disposable music out there now thanks to the digital era and everyone and his dog can start a label and produce music, but it comes down to putting out exciting, different and more interesting music than everyone else. I also feel, people think that they can make a quick buck this way, which is not possible, so a lot of people who start up and things don’t go the way they thought quickly fade away. It’s also so important to be unique and I’m learning everyday with this industry.

Was there ever a moment in your life where you realized that music was your calling?

Yes, it was when I started to get feedback, emails and plays from people who I consider to be my influences. When you see an email from an artist you love, and not just a one liner saying “thanks, its great”, I mean an email full of paragraphs with constructive feedback that makes you think, this guy actually had the time as he thinks I have potential etc. I’ve seen the last few years as a progression really, like a stepping stone and now I feel I am finally making the music I am happiest with, but I would never want to make the same record over and over, I feel I have to make something different each time I go into the studio, that’s what keeps it interesting. One day I can make a slow house groover and the following day I can make a big 808 track.

What advice would you give to aspiring producers and future record label owners out there?

Try and be unique, make what you feel is right, I’m still learning myself, I sometimes restrict myself to what I think labels would like, but the best success I have had is just making music with no boundaries, that the music that gets noticed.

I have an EP forthcoming on Off Recordings, with remixes from MANIK, and Hot Since 82 coming January, which I’m excited about. I also have another EP in the making for a label I’m really excited about, but it’s still in progress. As Coat Of Arms with Eats Everything, we have a couple of new singles out next year and remixes for Get Physical, Culprit & Off which we can’t wait to get out.

I wanted to do it in 2 parts to show what I play at warm up or at peak time. So it’s divided into 2 parts, part 1 is the terrace part 2 is the club.