Alan Nieves on Sacrificing for his Craft, Developing his Sound, and What Lies Ahead [Interview] 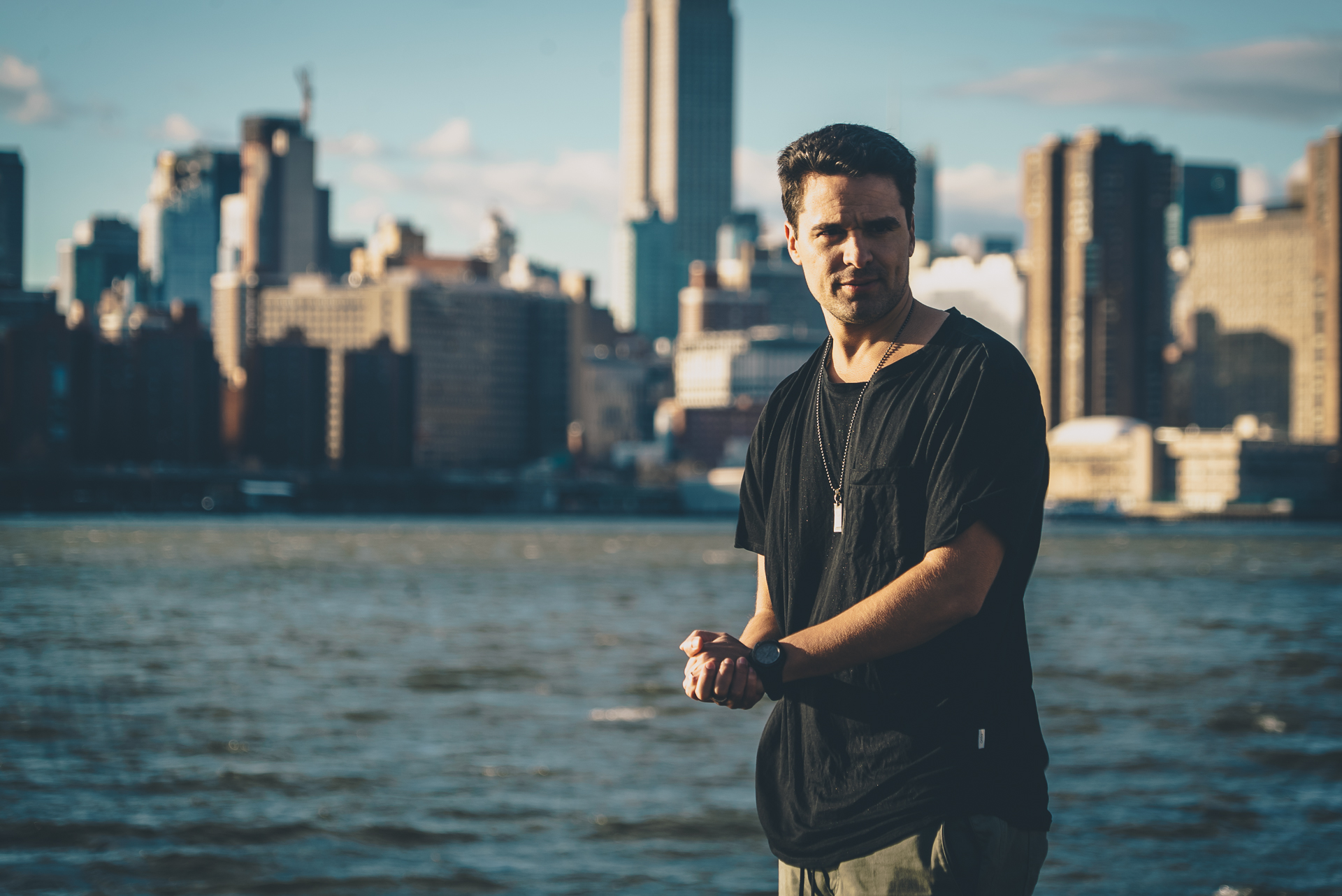 A life in music takes grit and sacrifice, with very few making it to the point of sustainability. Alan Nieves knows this struggle well; after all, he’s been hard at work developing his career for the better part of a decade, bubbling up from the underbelly of the New York house scene. Success has since fallen upon him like a landslide, with 2019 proving to be a truly breakout year for the burgeoning talent. Not only did he score his first Beatport No.1 spot, but he also carried out his first European tour, directly supported a myriad of top tier peers, and headlined his first New Year’s Eve show.

With these milestones behind him, Nieves looks ahead to yet another bright year as an established artist. It begins with a day of double releases, including an EP on Roush and a fresh new single on Desert Hearts’ Family & Friends Vol. 4 compilation. “Modern Talking,” elevates the record and adds variety, with Nieves taking a more minimal, nuanced route with subtle synth grooves and choice vocals overhead. The tune is his second with the California collective, who debuted there with his Empty Lights EP and has since developed a kinship over their shared outlook on dance music.

It only felt right to catch up with the talent at the brink of a busy year, where he filled us in on what’s to come, the path he took to finding his current sound, and of course, his blossoming friendship with the Desert Hearts crew.

Hi Alan, glad to host you on site! What are you up to at the current moment?

Glad to be here! Thank you for hosting me! Right now I’ve got quite a bit going on; we just announced Lost Beach Club in Ecuador for a four-day Carnival festival with Dennis Cruz, Detlef, George Smeddles, and myself so that should be great. We also had a great gig for NYE at a sold out headline show in Salt Lake City that was one of the best I’ve had so all in all 2020 is off to a roaring start. I have a few EPs and remixes for some big folks to finish so I’m gonna be locked off in the studio the next few months until Miami WMC in March.

2019 seems to have really been your year. Tell us some of your top highlights.

I’d say having a Beatport #1 and touring Europe across 10 dates in September were two of the biggest highlights as well as playing for elrow NYC, ADE, and BPM Festival in Portugal. Additionally, I received some incredibly heavy support on a special track from my favorite DJ Marco Carola that I will be able to share more info on soon!

You made your first Beatport #1 with your remix to ‘Veil’ – tell us a bit about how that remix came together! How did you end up being tapped for the job, and what approach did you take to your rendition?

That was such a special track for me – I got tapped for the job by Anëk who requested me and Stefano Noferini specifically and so I was delighted to take part in it. As far as how the remix came together – I actually finished it in a day or two after being sent the parts as it just sort of came together organically in the studio behind the great vocal stems they sent me. I used an acid bassline and some of my own drum and percussion sounds plus some fun arpeggiations to create what I felt was a driving yet trippy remix that has proven to be quite effective on the dance floor! It really was a wonderful experience top to bottom.

On the note of house production, what inspired your contribution to the Desert Hearts Family & Friends compilation? Did you approach the label or did they approach you to participate?

I am always sending the DH crew music to play in their sets and what not and have had such a wonderful experience with the label so much so that I definitely want to release on there regularly. I sent over this particular track and Mikey was really into it and started playing it out live. The label books their EPs a year out so this was a nice chance to drop a tune in early 2020 and I felt comfortable to release the track on the compilation as Desert Hearts really is all about Family & Friends and I’m lucky to count myself among them!

How did your relationship begin with the label, and how does the brand’s ethos as a whole align with your values?

I met the DH crew a few years back in New York and started sending them some of my music immediately. I remember Marbs was playing B2B with Deep Jesus and they dropped a few Dennis Cruz tracks. Dennis is a good friend of mine and I hadn’t heard much of that music yet in NYC so I zipped over to the DJ booth to chat with them and was like, “Hey I love this stuff too! I gotta send you guys some music.” From there, Marbs and the boys started playing the tunes regularly until Mikey signed an EP of mine called Empty Lights for release in September 2018 that I am still playing out and incredibly proud of! As far as the brand’s ethos, well it is 100% up my alley as an artist and a person. DH is so much more than a record label or a collective of DJs. It really is a vibe that you struggle to describe with words. They do everything in their power to be a positive force in the community and their parties are really just about bringing together like-minded individuals who are focused on wellness and positivity, and I think I am just incredibly drawn to that and them. I’m really keen to support their mission as it lines up fully with mine!

Your expertise lies in house. What are some trends you foresee within the genre in the coming months/years?

I think right now we are at a very interesting shift in what’s considered House / Tech House / Minimal etc. The trends of the last few years are kind of changing and everyone is in a bit of a dash to hop on what’s next. There’s a ton of exciting things happening in the Minimal / Deep Tech space and I think in the future in general we will see people continue to really strip back their productions (and also speed them up BPM wise) for 2020 and beyond. The styles we hear on the dance floor now are all exhibiting these characteristics and I also see more people trying to offer interesting grooves that aren’t what we’ve been hearing in the House realm the past few years. There’s a focus now on swingy-garage style productions coming out and basslines are also making a big come back versus 1 or 2 note rolling subs. I would expect that to continue as we enter the new decade because the styles of House music seem to go in 5 year waves so now what’s next is going to be forming more clearly as 2020 progresses.

We’d like to know about your path as a musician. How did you land at your current sound? What styles did you experiment with before finding what fit you best, and how has technology influenced your taste and technique over time?

My current sound I have continued to push and hone every time I’m in the studio. It has taken me about 10 years of playing around to find the right mixture of what I define as me. It always starts with a good groove unless I’m doing a remix or using a sample I know I want to build around. The styles I tried before was everything, from hip hop to trance to techno deep house and then I found my way into deeper tech and some tech house as well. Technology has made it so easy for me to find what I’m looking for using services like Splice but it has also created a LOT of music that I think makes the task even harder as a producer to distinguish oneself and create original productions with an authentic sounding signature. I try to incorporate as much technology as I can to make sure the tracks I’m making sound very modern as that is a key driver for my personal aesthetic.

If we’re not mistaken, you balance a 9-5 job, a family, and your budding music career – correct? How do you maintain balance? What’s a prime tip you can offer in effective time management?

Well just recently I’m happy to say I have been focusing entirely on music but I operate it very much like a 9-5 and did have a 9-5 while focusing on music so I can speak to that still! I have struggled at times to get the right balance but I think the best thing I can offer is to work with a set schedule for studio time as that is the only way to make sure you don’t skip when the rest of your life gets difficult. Also I sacrificed my weekends heavily to be in the studio and that made for some strained personal friendships but most of those people see what I’m doing now and I think have forgiven me a bit at least as I try to make it up to them!

What’s your studio setup looking like these days? Any essential tools you’re using in most of your productions at the moment?

My studio setup is pretty simple – I use Ableton as a DAW with an Apogee Ensemble soundcard. I use Mackie 600’s studio monitors with a Mac pro and a Mac display. I also have a Moog Little Phatty that doubles as a midi keyboard and analog synthesizer and I have a Yamaha P-90 keyboard as well. I also have a good mic with a pop filter and plenty of Aurelax to treat the room! For plugins I use the Waves bundle and essential tools I’d say are H-Delay, Reverb, Ozone, and the L3 multi band stereo compressor.

Finally, what’s next for you in the coming year?

2020 is going to be the best year yet; so far I have some releases slated for Deeperfect, Roush, and Desert Hearts of course with more in the works I can’t quite reveal yet but there is a ton of very nice footage of a big pending track of mine out there if you know where to look! I have had some of my favorite artists actually reach out lately for music so I have a lot to do in the studio. I am also gearing up to play Lost Beach Club next week for a 4 day Carnival festival which should be amazing and beyond that am currently working with my agent and manager to build another European tour and some key dates across the US as well. I’ll be in Miami for WMC, Ibiza, and ADE again this year so I’m quite excited to take things to the next level! Thank you again for having me.