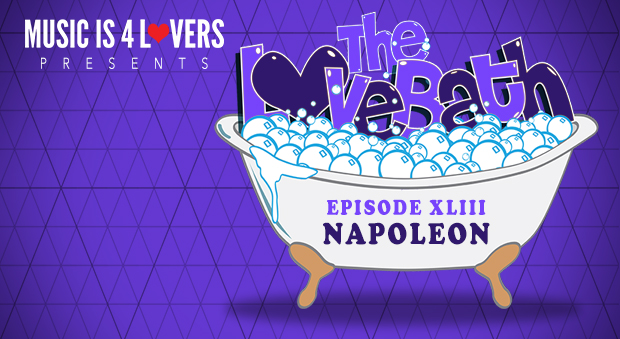 This week, we’re headed to Central America for a fresh and bubbly dip in The LoveBath with Costa Rican, jack of all trades, Napoleon. The young-gun DJ, producer, label owner and event promoter has been hard at work with his various pursuits… from releasing tracks and edits on esteemed labels such as Kolour LTD and Masterworks Music, to producing his own series of Good Bumpin’ events and releasing music from the likes of Luvless and Hotmood on his own Wonderful Times imprint.

With an impending tour of North America on the horizon, we caught up with the man himself to dig deeper into his various passions and projects. Dig our interview below and check the sounds from the young disco maestro, Napoleon.

Let’s get some background on Napoleon. Tell us about yourself and how you got started DJing and producing. Growing up in Costa Rica must have had an impact, how has that influenced you?
Hey there, I’m pleased to share few words and some music with the kind people at The Lovebath. My real name is Alexander, I’m a 26 year old DJ, producer, label owner and record collector based in Costa Rica, Central America. I got started DJing and producing at an early age… discovering dance music from my bedroom as a teenager circa 2008. I launched my Napoleon moniker around 2013 as a way to officially release music and break into the scene. In my earlier years, I was going to some cool parties in the town I live and was just starting to play at house parties and local venues. Around 2010, I took a step back from local gigs to focus more on production, my label projects and my music career outside of Costa Rica. I think I’ve always had a different vision and taste in dance music than other people in Costa Rica so, I realized it was important for me to blaze my own trail with the things I love and disregard the popular norms. Growing up in Costa Rica definitely had an impact on me and my career… it would see that a Central American DJ would have to work 5 times as hard as the  average DJ/producer from North America or Europe, especially in the disco scene, which is virtually nonexistent in Costa Rica. The local scene doesn’t influence me musically at all but due to conditions here, I’ve learned that consistency and a well-focused international projection is the only way to build a name for myself…so, at least it’s been a motivating factor.

You’re about to embark on a tour of Mexico and the United States…how’d this come about and how’s the preparations coming?
Yes! My tour is the result of these past couple years publishing mixes, releasing records, promoting my sound outside Costa Rica through social media and finding the right connections with promotors. I’m super excited to finally meet some of my e-friends from Mexico and United States in person and play some tunes together! We’ve been preparing this tour for the last several months and, fortunately everything was organized really quickly.I’m looking forward to my international debut very much. Dates and venues are announced on my Facebook page and hopefully, I’ll see some of you at my stops in Guadajalara, Playa Del Carmen, Cancun, Tulum, Los Angeles, San Diego and Tijuana.

What do you see in the future for yourself? Any specific goals you’ve got your sights set on?
Definitely continuing to make records, traveling internationally, producing music and establishing my local party and forthcoming, vinyl-only disco edits record label Good Bumpin’. And of course, keep promoting my sound, “educating” my local dance crowds with the aim to establish a disco scene in San Jose, Costa Rica.

Anything else you care to share? Upcoming releases? Remixes? This is your chance to plug, plug, plug!
At the moment, I got a forthcoming, two-track EP on UK based label Masterworks Music and a 7” vinyl-only debut release for Good Bumpin’ next year. I’m currently working in the studio on a bunch of disco-filled stuff for future releases.

#1 Sure-fire party-starter in your DJ bag currently?
Hard question because there are so many right now (as always) but, the new Hot Toddy tune “In The Genes,” recently released on House Of Disco is one of the hottest jams I’ve heard lately. Top stuff!