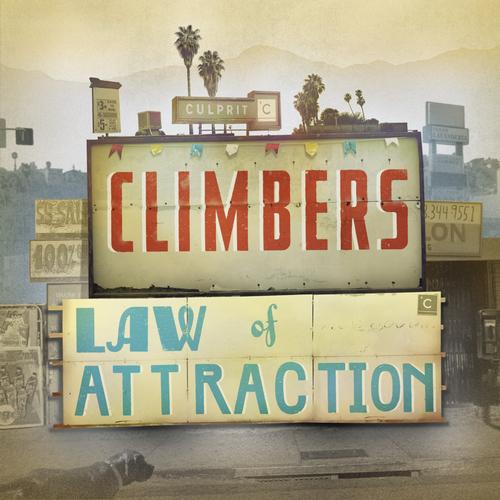 [New Release] Climbers, the duo consisting of Kiko Deal and Mexa Records co-founder Jay Blakk, hail from Mexicali, a Mexican city that sits right on the border of the United States and Mexico. Being from Calexico, its sister city on the U.S. side of the fence, I’ve had the opportunity to see Climbers perform on several occasions; every time it has been an experience to remember. The pair understands that their hometown doesn’t like to waste any time in getting the party started and their music and performances reflect that. With a raw, upbeat vibe, Climbers have the crowd moving almost instantaneously and ,luckily for the rest of the world, Blakk and Deal bring that same energy to The Law of Attraction, their debut EP on Culprit LA.

The record opens with “Go With The Flow”, showcasing Climbers unique style of percussion and vocal sampling almost immediately. The duo let you dwell on these sounds as they build up both the song and your anticipation, and with perfect timing, let loose a bass line that, reminiscent of their classic 2CB, would get the clingiest of wallflowers moving along to it.

The record slows down a little bit with “Losing You.” Musically more subtle, what really stands out throughout most of the track is what seems to be a nearly untweaked vocal sample of Gladys Knight’s version of “Heard It Through The Grapevine.” Using roughly seven seconds of a three minute song, they’re able to convey a feeling that I don’t think even the source material was able to achieve. And the deep, slow, almost sad feel of the Climbers production help the listener connect with Knight’s lyrics.

“All Right,” the records third track, is a fun, danceable number that shows off more of that distinct Climbers sound. However, closing cut OWS, gets a little darker. Employing a deep, aggressive, almost growling bass line, Climbers return to a style they displayed in their remix of Dexter Kane’s Speak and Spell. Add to that drawn out synths and a sparse but effective use of echo, and Attractions ends on a haunting note.

The Law of Attraction has been one of the most anticipated records as of late and it is no doubt that Climbers met and exceeded expectations. With backing from many of the most respected names in the industry, more music on Culprit LA and Nervous Records imprint Nurvous on the horizon, and touring, 2012 is set to be the year that this talented duo put both them, and their city, on the map.