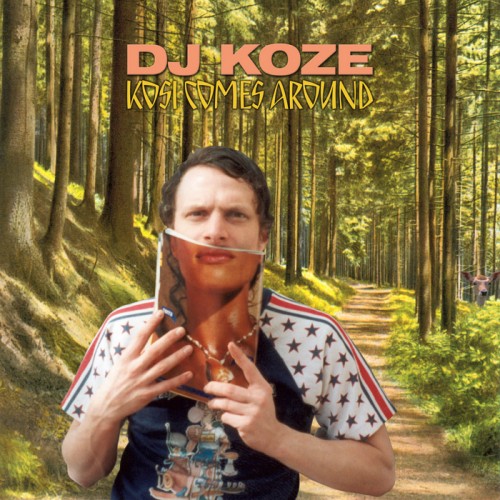 DJ Koze truly made his mark this year with an incredible full length album that reached far beyond the musical imagination, seeking the talents of Matthew Dear, Apparat, Caribou and more to heighten our awareness of the boundless electronic platform.  Throughout the year, he attained an innovative thread of artists to contribute to his imprint Pampa’s textured 2013 roster while also creating top notch mixes for publications like XLR8R and FACT.  His status as one of our most innovative artists of the year suits his passionate drive and impeccable ear and we look forward to the inspiring strides we know he will make in the future. [Devin Inabinet]

The buzz surrounding the shrouded identity of Ten Walls began the moment the mysterious producer’s first single,’Gotham,’ made the rounds in the early festival circuits back in May. Carried by a staccato bassline and frenetic synths stabs, the heady and hypnotic nine-minute number quickly became an unmistakable and inescapable facet of 2013. With exquisite EPs on Innervisions and Life and Death now under his belt (Gotham and Requiem, respectively), it has been revealed that the man behind the curtain is Mario Basanov, producer of primo remixes for Flight Facilities, Bonar Bradburry of PBR Streetgang and, most recently, Downtown Party Network’s stunning ‘Space Me Out.’ In addition, he has released Machinarium on Best Kept Secret and Bill EP on Needwant under his own name to much acclaim, validating his laudable versatility. There’s no doubt 2014 will see Mr. Basanov continue traveling to far off lands, all the while creating new ones with his magnificent music. [Reisa Michelle]

It was a massive year for Berlin-based Mano le Tough. After dropping his first full-length, Changing Days, on dancepop imprint Permanent Vacation in February, he released memorable remixes for Tensnake, Midnight Magic and Roisin Murphy, and crafted an enchantingly tribal dancefloor destroyer with his rework of Batongo’s ‘Aguirre.’ Giving impressive sets at such notable nightclubs as Warung Beach Club and Panorama Bar, Mano le Tough’s music maintains a beautiful balance between light and dark to truly take the listener on a deep and diversified journey. [Reisa Michelle]

2013 was undoubtedly the year of Dixon, and there was little surprise when he was voted the #1 DJ on Resident Advisor’s annual reader poll. Innervisions, his imprint with Frank Wiedemann and Kristian Beyer of Âme, put out some of the most highly regarded tunes of the last year, including Ten Walls’ Gotham EP and Agoria’s Scala EP. Releasing his own remarkable remixes on No.19, Pokerflat, Freerange, and Crosstown Rebels, everything Dixon touches is destined to dominate the dancefloor. His spellbinding sets, including an exceptional Essential Mix, send revelers soaring, and are sure to keep him in high demand for 2014 and beyond. [Reisa Michelle]

With releases on Minus, Life & Death, Visionquest and huge remixes on No.19 and Permanent Vacation, these dark knights have thrived in the spotlight this year.  The Italian duo’s mastery of eerie, resounding depth has inspired a trend within the underground, and seeing as they are already booked for some of the hottest festivals internationally in 2014 including Movement and Hideout, we do not anticipate an end to their reign anytime soon- bravo ragazzi. [Devin Inabinet]

Listening to Stimming’s rich, tranquil production, you can sense his abounding talent and background as a muti-instrumentalist.  Releasing an original extended piece on Diynamic this summer and traveling everywhere from showcases in Miami and London to The BPM festival, this German artist shows no signs of stopping, embracing and carrying on the wonderful energy of a successful year. [Devin Inabinet]

The German ‘superhouse’ duo Andhim had a hell of a year. Their original production ‘Hausch’ was one of the feel-good tracks of choice, the captivating cowbell of ‘German Summer’ could be heard in sets far and wide, and their remix of Kölsch feat. Abrahamsen’s ‘All that Matters’ was memorable and moving. Andhim’s brand of euphoric fun makes for an ever enjoyable dancefloor experience, as evidenced by their 90 minute set from Fusion Festival, their 3+ hour set on the Bespoke + TBA Brooklyn Boat Party, and their mix for DJ Mag’s Weekly Podcast. [Reisa Michelle]

Tigerskin absolutely imprinted his veteran sound on 2013 and we appreciate his varied, elegant style. The Dirt Crew original inspired us all this year with his long awaited full length that came in crisp, emotive and groovy for some autumnal vibes, featuring Till Von Sein, Uffe and more. From “Heartbreakin’ Body’s” danceable flow to the rich, progressive quality of “This Place Is Empty Without You,” All Those Goodbyes spoke to us this year-not to mention our favorite remix of Myrakaru‘s uplifting “Suuskuu.” This curator of must-haves gets our vote for 2013!  [Devin Inabinet]

Canadian born and New York bred, Bob Moses have grown through Scissor & Thread with their moody, vocal presence into our soul. They closed out 2013 with our favorite work yet, Far From The Tree, and many define their live set as a highlight for the year. Whether experiencing it on The Playa, at Grand Park Sessions in Los Angeles or  El Dorado in San Diego, their energy remains consistent and their sound impeccable, which has us all dreaming of their return. [Devin Inabinet]

These German super groovers have produced bright, beautiful work that toured the world extensively this year.  After establishing their own brand of delicate depth with Va Ga Va Ga in the Spring and their amazing contribution to Cascandy’s “ Goodbye Darling”, their sound became a summer sensation inspiring the completion of their fantastically fluid extended Halle Salle. This duo of the Monaberry family bring a potent spirit to their passionate projects and uplifting DJ sets, and we cannot wit for them to breeze through the US in 2014! [Devin Inabinet]

Tripped out, dark entrancement has caught Eric Volta’s interest this year, sharing sentiments with Art Department’s No.19, Sebastian Voigt for Detroit’s Visionquest and close friend Forrest. on a spacey burner for Toronto’s My Favorite Robot Records that also caught Ministry of Sound’s attention.  This British born Berlin transplant has been a resident and contributor to one of London’s best Sunday gatherings with Lokee Musik and continues to help forge a conscious musical path with the record label-we know he cares <3 [Devin Inabinet]

After leading two of our favorite sets at The Garden Festival this summer, escaping us all into his imaginative and fresh Family Vacation this fall and carrying features on Beats In Space, Resident Advisor and XLR8R, Axel Boman has made a lasting impression on us this year.  His vivacious mixing style, uninhibited production and characteristic zest for life are inspiring and we appreciate his ability to push the boundaries of the house spectrum, incorporating organic elements from an array of cultural influences. [Devin Inabinet]

Forrest. has soon become one of the most sought after collaborators of the year, joining forces with artists such as Tom Budden, Mat.Joe, Avatism, Eric Volta and Tim Paris for imprints My Favorite Robot,  Vakant, Visionquest, Alive Recordings and more.  In addition, his solo work for Mexa and Midnight Vision and integral role in Amadeus Records shows his sophistication and growth as an artist, and this year has proven one of strength for the burgeoning Brit. [Devin Inabinet]