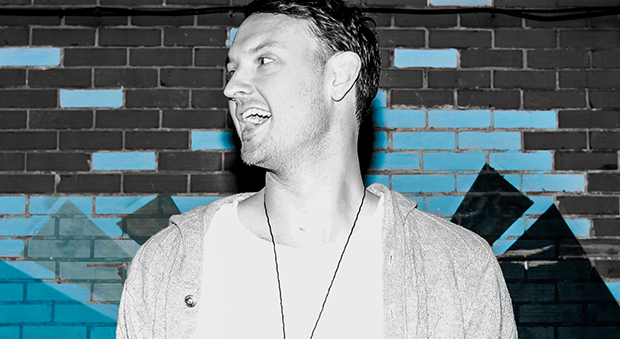 If you are involved in the underground electronic industry in any real capacity, chances are you’ve met or corresponded with a man named Alex Fish. He’s a DJ & producer (under the moniker Holosound), businessman and consultant (and we’re sure a slew of other roles) with his hands having touched such companies as Pulse Radio, Boiler Room, Hypefire.tv, Sheik N Beik NY, and now DeepHouseAmsterdam.com. He’s an incredibly well rounded music industry figure and he’s always worth following if you’re interested in seeing cutting edge ideas come to fruition. We met Alex several years ago and we’ve watched him grow his mastered skill set as he’s spread his Midas touch to company after company.

Alex Fish’s story is really not a simple one to tell. He’s always got a new project he’s working on, and he loves to hop around the world for business or to DJ, so we never quite know what he’s up to in the moment. We will try regardless to paint you the picture of the man who we call the “Swiss Army Knife” of the underground electronic music industry.

So Alex, let’s start with the basics, how the hell are you? Tell us something new we might not have heard already through the grapevine.
Cup three quarters full?  I’m amazing, engaged to the woman of my dreams, working on some very exciting projects and return to NYC on Monday.  Cup one quarter empty?  I spent a very chilly winter in Montreal making some new friends but missing a lot more old ones.  Oh and now I’m fat.

I know you’ve got a complex and detailed history in the music industry, so why don’t we talk briefly about your background. How did you get into this music thing, and what would you be doing if you did what your parents wanted and stayed clear of the music industry? Doctor? Lawyer? Dentist? Pastry Chef?
I got hooked on electronic music in 1995 when a friend pressured me into trying to buy Hash in Jerusalem and I got a tape of Psytrance instead. It had no writing on it and was covered in colorful Fractals.  I’d been listening to a ton of Pink Floyd and when I heard Jim Morrison’s voice say “The music was new black polished chrome and came over the summer like liquid night” over an acid line I was hooked.  I graduated from college with a Major in Film, and worked in Film/TV for four years before chucking it all to move to NYC to pursue music in 2004.  My path to superstardom has been linear and measured ever since.

If you want to blow your mind peep the mix that started it all HERE. So aggressive!  But it connected with me at the time and this was all I listened to for 2 years. (Insert jokes about my taste here)

You’ve seen the music industry evolve over the years, from pre-US EDM times. How do you think the industry has grown/changed/evolved/devolved? Are you happy with its direction?
I’m stoked and happy that EDM is now a thing in the states.  It’s ugly, not my music, slightly ‘Murica and not what I’d have told you was something I ever wanted that scene to look like BUT it’s something people can no longer ignore.  It’s also hard to hate on the fact that these kids seem to really enjoy bath salts and listening to the same records in stadiums over and over again-that’s great for everybody!

But seriously, it brings awareness and money towards the other side of the electronic music coin, which is where I make my living.

Tell us a little about your track record. We want to know the summarized timeline of your experience in the music industry.
95-98 closeted suburban psy trance raver who played bass in a rock band
98-01 college frat DJ mixing trance and daft punk breakdown to breakdown on belt-driven and then Technics turntables
01-04 worked in Hollywood and DJ’ed around California
04-11 juggled random day jobs in operations and marketing to DJ and produce on the nights and weekends
11-13 wrote for then ran Pulse Radio North/South America
13-14 led Boiler Room’s expansion in Latin America (concentration on México and Brazil)
14- Choose your own adventure

You are a man of many talents. You’ve been involved with so many facets of the music industry, it’s hard to peg you as one thing or another. Who are you? What do you tell people you do for a living? Do you want to be known as a DJ or a businessman?
I’m someone with a vested interest in shaping the way increased commerce affects the industry and culture of the music I love.  Leading and consulting for several business efforts that allow brands to resonate with consumers while providing top shelf video and audio content for fans and artists takes up about 50% of my time.  Bringing innovative and compelling concepts to fans around the world on the heels of the marketing budgets of big business is something I couldn’t have imagined a few years ago and is really exciting.

Nobody in a boardroom will ever take you seriously if you lead with the fact that you play house music all night long.  On the other hand, the time spent outside of the clubs has hurt me a bit on the DJ bookings side because I’m not able to devote as much time to promoting myself and growing as an artist.  At the moment, I’m lucky to enjoy a few good gigs a month and it allows me to concentrate on building my own business which is just as, if not more, important in the long run.

We heard you’re working on a new music festival. We want to know more. Where is it? When is it happening? Spill the beans, man!
As much as I’d like to, I can’t really share much info at this stage.  I’ll tell you it’s going to happen in Q1 of next year in a part of the world that has never seen an event like this. It won’t conflict with any of our favorite stops on the global music calendar, will incorporate the best aspects of a destination festival and offer something refreshingly experiential.  Oh and you won’t need a code to buy tickets.

So back to Holosound — Tell us a little bit about your DJ/production background. You’ve been DJing around the world quite a bit, particularly Latin America! Tell us about that.
I spent a great deal of time learning Logic and working on production from about 2004-2010 but I’m just not as efficient as I need to be to get the output I want while remaining productive in other realms of my life.  I think a big mistake was not learning Ableton because if you can make a hot record without devoting a week to it (as was the case with me in the best of circumstances) nobody really cares if the audio engine is cleaner.

I’ve always focused on Latin America and have been lucky to grow a following in Colombia, Ecuador, Brazil etc based on some small but successful first bookings that began around 2010.  The vibe down there is getting stronger by the minute!

Diverting my attention from solely growing my career as an artist has allowed things to mature naturally with regard to bookings.  I think that’s perhaps the best advantage to having a day job in a night industry; it helps me not get too singularly focused on when my next booking will be.

What is this mix about? What are some of the tracks you’re excited to showcase here?
Some big projects are taking up a ton of my bandwidth these days and I’m preparing to move back to NYC from Montreal so it was a little more rushed than I’d have ideally wanted.  I had 2 hours at a friend’s club to mix this live before they opened so it’s got a slightly rougher edge I’d like to refer to as “endearing.”

It’s a road test of a bunch of new music I’ve collected that represent an overview of the sub-genres within the worlds of Deep House, Techno, and even Pop to a minimal extent.

If you could give an aspiring music industry professional some advice, what would it be? (besides get out while you can)
Remember that there are tons of things you can do that are creatively fulfilling and lucrative within the music business.  The majority of these do not involve becoming a DJ.

Any exciting news you’d like to share with us while the iron is hot?
I think I’ve already over-shared.  I blame coffee but the problem is likely deeper than that.

Tell us an embarrassing secret. Make it good!
After going large at Kazantip in 2013 I was so emotionally fragile I cried at “A Good Day to Die Hard” on the Aeroflot flight home.  There was a strikingly beautiful Russian girl next to me who I think I genuinely frightened.