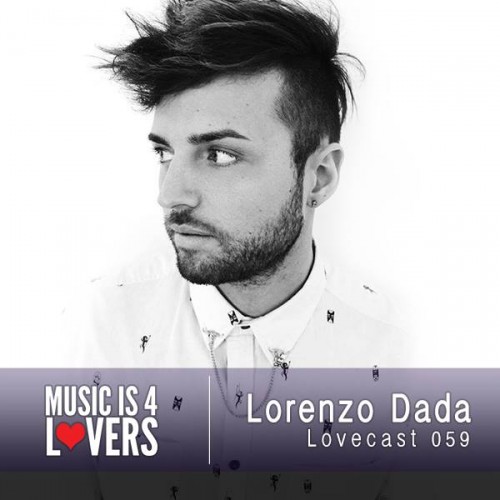 Lorenzo Dada is steadily building his reputation as a deep house producer who is influenced by his classical background. From his start in 2004, Lorenzo first received recognition after Jay Haze heard his music and had positive praise towards it. Jay Haze was quoted in an interview with Meoko on his feelings towards first hearing Lorenzo’s music saying, “Wow, this is really quality stuff. The vocalists he works with, the songs he writes, it’s not just standard stuff.” Together they created the song “Echo Park” and finalized an EP with “Broken Glass” also remixed by Jay Haze for Lorenzo’s label Sonora Records. Lorenzo made his next leap by Culprit LA releasing his song “Don’t Be Rude” as their first track on their Above the City 3 Compilation.

It was then that Lorenzo widened his audience and received an offer to do an original song for a new UK label gaining respect known as Dilate Records. For the EP, his track “00.8” was remix by both Jozif and System of Survival and received support from artists such as Droog, Richy Ahmed, Shall Ocin, Lee Foss, and Pillow Talk.

Lorenzo’s next release and original song titled “Intimidations” was on the 7 Years of Akbal Music-Part 2 Compilation. Lorenzo was then asked to do a remix of “Can’t Give Back” by Matteo Luis, for a sister label of Get Physical known as Poesie Musik. The label devoted to finding new artists and exposing them through a new platform started following Lorenzo Dada from none other then Jay Haze. On his own label, Lorenzo has also released EPs with remixes from Wareika, No Artificial Colours and Daria (Watergate).

For the past 8 years Lorenzo Dada has been DJing shows in Rome, Italy alongside influences (Ryan Crosson, Prins Thomas, KIKI, Homework, Burnski, Amirali and many others), gaining musical experience and outlook. He has also played in events held around the world including WMC in Miami and Sonar in Barcelona.

Since then, he has encompassed all of his talent creating a truly unique Live Set experience. Created using Grand Piano, MicroKorg XL, Ableton Live, Akai, and Novation. Lorenzo’s Live Sets are commonly divided by his passion for classical compositions and deep house. He has showcased his Live as a guest artist at events held at GOA Club in Rome, as well as opening for Marco Carola’s DJ Set at Music On in Rome, and before Sven Vath at GOA Ultrabeat. Lorenzo has even had the chance to showcase his Live Set at Pattern Bar located in Los Angeles, Ca.

Lorenzo Dada is the founder of Sonora Records, which he started in 2007 with the idea of releasing high quality music and pushing the boundaries of a genre based label. Sonora translates to “sound” and Lorenzo has always kept the same message clear: “The artists who release on Sonora have their own unique sounds, we are not a label that expects artists to change their style to fit our expectation on what genre the music should be. Instead we allow our artists to create the movement and direction for the label.” Lorenzo has been the Creative force behind Sonora since it started, he is the one who finds new unknown artists and pairs them up with much more experienced artists for collaborations as well as remixes. With 53 releases and many being in digital and vinyl format there is no end to the progression of Sonora Records. A brief selection of artists who have been a part of the label include: Jay Haze, No Artificial Colours, Death On The Balcony, Wareika, Daria (Watergate), Eduardo Castillo, and many more. Lorenzo Dada is currently working towards releasing EPs with some of the labels he has released on through compilations including Culprit LA, and Akbal Music. He is also working on developing and exposing his Live Set towards a wider audience and being showcased in events around the world as it truly a remarkable experience.

Where are you from and how has your upbringing shaped you into the artist you are today?

I was born and raised  in Rome, Italy. It is a great city to have been raised in with a lot of different types of music and many events to be a part of. I believe the most important part of who I am as an artist today has a lot to do with my family and there backgrounds in the music industry. Both of my parents are musicians and my father is a very well known musical composer so I grew up with music being a huge part of my life. Today as an artist I am constantly mixing my classical background and upbringing with my passion of electronic music.

Can you tell us a little about where you live now, the scene, and how it effects you musically?

As of right now I currently live half of the year in Rome and half of the year in Los Angeles, CA. In Rome I own the Yamaha Music School and when there I am constantly in the studio producing as well as teaching students. When I am staying in Europe I am constantly traveling to cities like Berlin and London to scope out the scene. This affects me musically as I really like to gather and follow many different types of music and traveling always influences me to keep progressing with my own sound.  When I stay in Los Angeles I am immersed into a beautiful scene with wonderful musicians and events. My time in Los Angeles I always try to get in the studio with fellow producers for collaborations. Los Angeles is such a large music hub now that when staying there I receive a lot of opportunities and am constantly meeting new people within the scene.

I started composing and writing music as a child when I was studying piano. As a producer under the name of Lorenzo Dada I started about 7 years ago but had my first release in 2010. I like to think it has always been a serious part of my life as I consider myself a musician.

The “LIVE” show is amazing! Can you tell us a little bit about your set up and what you mean to deliver with your sets?

Thank you! My set up really depends on the venue and the people I am performing for as everything is specially created for a single performance. I do however have two forms of my Live Set one being with grand piano, the other with a keyboard and I always use Ableton Live,  Akai, Novation, and a MicroKorg. What I always try to deliver is an experience for each person that is catered to the event and location that they can feel a part of as well as introduce new sounds. I spend a lot of time preparing new music for each set and every time I play will be different from the time before.  At the end of the night I want people to feel as if they took a musical journey with me and that they see me as a musician and not just a DJ.

We love your label, Sonora Records, can you tell us a little about it and the direction you want to go musically with it?

Again thank you! It is truly wonderful to hear, as Sonora is a very important project for me, and the last year we have grown so much in our brand and even in followers. Sonora is an outlet for producers to be musicians and the way we have it set up is to find unknown talent from across the world that is truly quality stuff that we believe should be recognized. We also work with well-known producers that we feel have a truly unique sound to create a remix for the release. With every EP we are trying to put together a story when listening to the full release and we do this by picking artists who have very different styles so when listening people will have that one song that is their favorite due to the genre but will also be introduced to a new genre or even new sounds they aren’t familiar with. This is the direction for Sonora and is what Sonora will always be about!

Who are some of your favorite producers at the moment?

This is a tough question! I am always changing but at the moment I like Axel Boman for his personal style and has a lot of soul in it as well as Isolee for his incredible production on Pampa.

What advice would you have for aspiring producers sending music to a label, or your label for instance?

Always be reasonable and make sure to follow any guidelines a label might have. You could loose your chance of having a release with sending to the wrong email, or not adding information asked for, and even for being to pushy. One important note for sending music to any label – ALWAYS title a file with your name. Some labels may download your music listen and say okay this is good but then go back to it months later and will have no idea who or where it came from. For Sonora we have a set of rules to follow as we look for artists who actually follow and understand our label. One part we ask for is links to your facebook page, or soundcloud, or even your beatport page and it may seem strange to many as if we want to see how many follow you or how many like what you post but this is not the case. To release on Sonora we need to understand how you represent yourself, what influences you, and who you are in general. If you have incredible music but you do not represent yourself in the right way we are not interested as your bad intentions might someday reflect on our label. Every label is different, so always check beforehand at what they are expecting from you and DO NOT send emails with 5 different labels on CC. This is a very bad look for you and almost disrespectful to each label on the email.

Where do you think the musical trend will be in 2 years from now?

Music today is evolving so rapidly so I really am not sure where it will take us in two years. I do however see a large change in what used to be underground (all forms of house deep/tech/acid) as well as techno are becoming more and more commercial and is gaining a large following so it might continue on with these genres.

With this mix I used music from labels that I am following quite a bit lately and even threw in one of my favorite tracks of the moment by DJ Koze. As always when putting together a mix I tend to focus on creating something for everyday listening while focusing more on the selections and journey the music creates. Hope you enjoy!