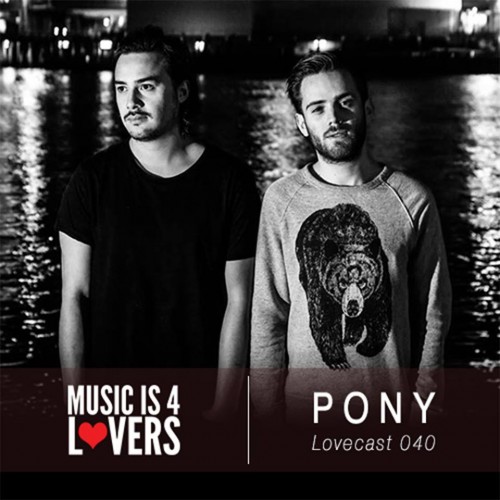 We’re pleased to present our 40th Lovecast from the Dutch duo PONY! Having played all over their native Netherlands, they’ve been busy in the studio working on some new productions, and are looking forward to taking their diverse repertoire around the globe. Their monthly podcasts are always superb, and we welcome them warmly to the Lovecast roster.

How did you two meet?

We met for the first time at a party in Amsterdam about 3 years ago where Soul Clap & Nicolas Jaar were playing. We started chatting about all kinds of stuff and roughly two months later we played for the very first time at an illegal rave in our hometown.

You make it a point to maintain an open mind to all genres of music. To that end, what are some genres you listen to and draw inspiration from that people may be surprised by?

That’s right, we don’t want to focus on just one genre, we are very open-minded and take inspiration from old disco and soul tracks, but also from hip hop and reggae.

You’ve said that inspiration for your productions comes from many kinds of art. What are some non-musical art forms you enjoy, and are there any artists in particular that you have been especially influenced by?

We both follow a creative education, or have followed. Graphic design and video editing are things that we are doing besides music. The atmosphere of certain visual images can sometimes be a great inspiration for our music.

You tend to keep a pretty low BPM in your sets. Why do you find that preferable when you play?

We prefer playing at a lower BPM because we want to create a certain vibe. Harder tracks or techno tracks with a high BPM may sound really cool if you down-pitch them!

You’ve gotten to play some really amazing places, including Time Warp in Holland, Strafwerk Festival, and Studio 80 in Amsterdam. What has been your favorite venue to play so far?

Time Warp Holland was definitely our coolest gig so far. Of course we had other really great gigs, but this was so big and, although we played very early, the dance floor was packed!

What are you working on at the moment?

We’re currently working on various productions. At the moment we are finishing 2 EPs that definitely gives you the summer feeling. We hope to present them to the world very soon.

What else are you looking forward to for the rest of 2014 and beyond?

It would be really cool to play some more outside of Holland. So we are hoping to have more international gigs, and finally releasing our first solo EP which is coming soon!