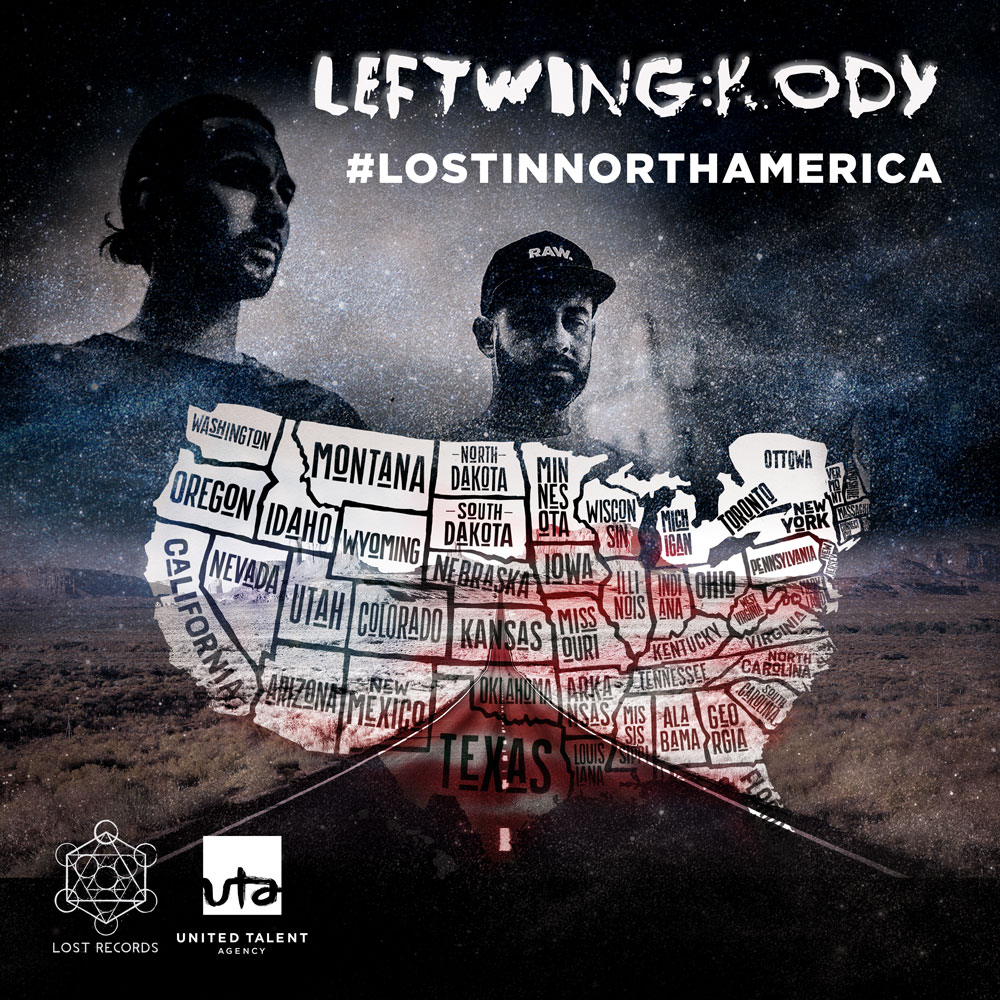 With 2018 already shaping up to be their strongest yet following knockout releases on Relief, Kaluki, Moon Harbour and Toolroom, not to mention a Loco Dice’s Desolat imprint with rave anthem ‘Snap Back’ and their current remix of Kelis’ ‘Milkshake’ on Sony – UK tech-house aficionados Leftwing : Kody have just announced their debut tour of North America and Canada.

Approaching their sets with limitless energy, Leftwing : Kody have built a solid reputation for knowing exactly how to read a crowd and this fall will see them take their inimitable brand of tech house across the Atlantic for the first time. Beginning on September 27th in Seattle, the seven date tour will include CRSSD Festival in San Diego and Goldrush Festival in Phoenix, as well as dates in Los Angeles, Orlando and Toronto. Speaking about the tour, Kody said:

“We have waited so long to make our North American Debut and now it’s finally here. UTA have put together an amazing first tour and we can’t wait to get over the Atlantic! We’ve heard so much great stuff about the crowds across the pond from our friends and we can’t wait to experience it for ourselves. We’re really looking forward to seeing the dance music culture from our North American cousins”

Having already ticked off shows at the iconic Fabric in London, Snowboxx Festival, Dubai, Amsterdam and Ibiza for Solid Grooves this year, and with artists like Loco Dice, Jamie Jones and Solardo all supporting everything they do, you know that this is going to be a very special run of shows that will cement one of the UK’s most exciting talents as a force to be reckoned with moving into 2019.

You can catch Leftwing : Kody at the following shows:

We had a chance to have a chat with the boys about their upcoming tour, and what’s on the horizon for them this year and next.

First off, congrats on the Desolat release and also landing an official remix for ‘Milkshake’! When you guys made the remix, did you have any idea it was going to be so big?

Thanks very much – we have had such a great year releases-wise and it was an honour to be a part of Kelis and Freejak’s Milkshake reboot. The whole process started with us doing a bootleg of the track at the beginning of the year and passing it around to a few friends. Around April time Sony got in touch with our management and said they had heard our remix and that they were re-releasing a 2018 version of Milkshake complete with a re-vocal from Kelis and would we consider having our remix as part of the package? Of course, we were honoured to be asked and used Kelis’ new vocals on our remix. The rest is history

Seeing as this is your first North American tour, are there any restaurants or places you’re looking forward to seeing, that you wouldn’t find in Europe?

I’ve heard a lot about In & Out burger so looking forward to trying that for sure as we don’t have that in the UK. As it’s the first time in the states I’m going to try and be as much of a tourist as possible – not only am I really excited about the shows but also seeing all the sights that I’ve only seen in films and on the TV

What are some of your tour essential items that you take when you guys are on the road?

Over the last few years we’ve seen how much tech house and house has grown, to the point of dominating Beatport week in, and week out. Did you ever imagine that the underground house and tech sound would get so big in North America, and well in general?

It’s been great to see how the scene has grown in North America, it shows how well received the music is on a global scale. Watching the music spread around the globe has been very impressive and swift, and has given us the opportunity to have our music heard in many different parts of the world as well as the opportunity to play and visit many places we wouldn’t normally get to which is something we will be forever grateful for.

What are five dance floor weapons that always find their way into your sets?

We have some great releases lined up: a collab with Michael Bibi on Solid Grooves;
an EP on our own label Lost Records, and a collab with house legend Todd Terry on Sola – that’s just what’s left to come out in 2018. We have lots of great stuff ready for 2019 but we can’t say too much about that yet

Seeing as how you both run a very successful and sought after label, who are five producers we should keep an eye on this upcoming year?

Drink of choice while in the DJ booth?

A nice glass of Cabernet