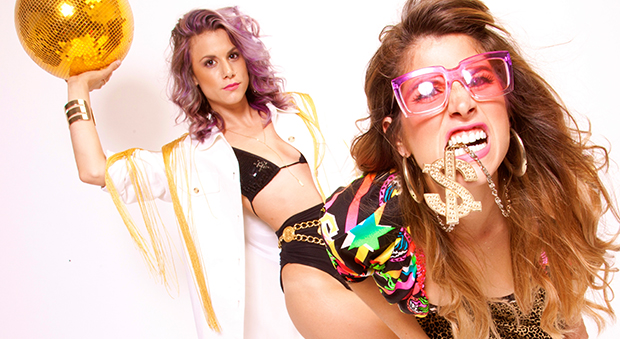 Aside from their own parties, Lisbona have recently warmed the decks for Seth Troxler and Jamie Jones in Hollywood, and Green Velvet in SF. Upcoming gigs for Laura and Ava include a Smoke N’ Mirrors showcase with Tiga, Thugfucker, and Oliver Giacomotto at the BPM Festival; and The Midway in San Francisco with Maceo Plex later in February 2016.

We’re excited to start a fresh new year of Hometown Heroes with two of the coolest Heroines of them all — Laura and Ava Lisbona. Check out their dopalicious mix and read the interview below to learn more about the girls’ story.

Interview with Laura and Ava Lisbona:

How did you two get into house music and DJing? Do you remember a specific moment of inspiration?
Ava: My sister was a huge influence on me because she is older… I blame her for my ravey ways.   Until recently I felt like I was judged for going to raves and listening to electronic music (because I was) which made me love the culture based on acceptance even more.  I wouldn’t say there was one specific moment, but many moments with friends, loved ones and lovers that have made my affair with it everlasting (I think).

Laura: Ummm, excuse you…blame me for your ravey ways? I would never.  I got into house music at a young age, some time in middle school.  I remember my mom’s friend asking me when I was about 11 or so what my favorite music was, and I replied, “Well, right now I’m really into deep house.”  He had no idea what I was talking about.  In terms of inspiration to DJ, well, I actually just recounted this in a recent interview with Culture Vulture.  This was when I was about 9 years old and completely obsessed with Salt ‘N’ Pepa.  I wanted to learn to scratch like Spinderella and begged my mom for turntables.  She thought I was nuts!

How did you come up with the brilliant idea to start STRETCH? Who was your most memorable guest? What was your most memorable party?
Ava: We wanted something light hearted.  In the time it came about we felt there was a lot of new fame, elitist attitudes, drape-y clothing and the likes.  We just wanted something where people couldn’t take themselves too seriously.   And you definitely can’t (well, I can’t, rather) dressed in neon spandex.  Most memorable guest is really tough because for the most part, we have booked our friends to play, so of course we have had some serious fun.  Also, I don’t like to play favorites…

Laura: Watching the Eric Prydz “Call On Me” video as a teenager inspired my friends and I to throw a Tacky-80s-Workout party in college and I was hooked.  Then I realized that my favorite way to go out for a proper rave session was wearing spandex and hi-tops.  When my boyfriend, Chris, opened Monarch in SF years ago, I asked him if I could do a Spandex-and-Hi-Tops monthly, which, after some coincidental brainstorming sessions with Ava and Carla Tutu, eventually made its way conceptually to be STRETCH: A Spandex Spectacular for Fabulous People. We took everything full steam ahead, creating a video worth watching more than once and producing colorfully events embedded deep in many ravers’ memory banks.  Most memorable parties?  Jeez…too tough to answer.  Obviously the one we did with you nice Lovelife guys in San Diego was radical

Most memorable guest? I’ll say Francesca Lombardo because she showed up to our one-year anniversary extravaganza wearing an incredible spandex onesie and she wasn’t even playing!

Where do you see the dance music community heading in the next 5 years?
Laura: To a place where crowds and music are more mish-mashed.  (That’s very technical music terminology for those of you who don’t know…ha).  It’s fascinating not only how many genres and sub-genres of electronic music there are now, but how those genres bleed into each other more and more. Technology has continuously allowed us to explore and conquer new boundaries, and I think we’re only going to see the lines continue to blur, exposing us to fresh sounds that wouldn’t have even been possible a few years before.  Tropical synth-breaks? Bring it on.  Industrial lounge-core? Sure, why not!

What’s the horizon for you in 2016?
Ava: Hopefully lots of gigs and parties.

Laura: We’ve started making music, so you can expect some releases, starting with our first remix out in January (a collab with Shiny Objects for electro-pop band Date Nite).  We’re also wrapping up a remix for Rena Hart, which we’ve been working on with VALI.  Gig-wise, the first couple months of 2016 include The Smoke ‘N’ Mirrors showcase at BPM, an exciting monster of an event with Up All Night and Liaison Artists at The Midway in SF, then…jeez, I guess we’re already almost into WMC time, where we’ve got some great stuff TBA. Getting into April, we’ve just confirmed a date at Palm Springs Fashion Week, which makes us happy because the Coachella Valley is home for us. Over the big picture, we’re looking to expand our Lisbona Sisters brand, not just as a musical entity, but as a freakin’ lifestyle empire. I’m personally feeling ready to take over the world, in a really nice way.


Ava: Christian Burkhardt “Doubledub”.  Not new at all, but, when I first heard this, I must have played it 9 billion times (no exaggeration, kind of) then threw it in the I’ve-binged-so-hard-on-this-track-I-never-want-to-hear-it-again pile…but then randomly threw it in a folder for New Year’s and played it again last weekend for the first time in forever, and then shamed myself like, “How dare I ever think I never want to hear this again? It’s gold. Forever.” I’m so obsessed again with this it’s so ridiculous. I’m going to listen to it right now…again!

Dream gig…
Ava: Wow, this list is so long. Fabric, I suppose…Warung.

Laura: Pacha in Buenos Aires, because I have such great memories there and it’s largely where I started my days as a clubkid.  On the festival front, there are way too many to count.  We’ve gotten to play Coachella, Sunset Campout, and Disco Knights at Burning Man, so that’s already a few dream gigs off the list.  I guess now my dream is to play them all again (and again).  Haha.  Also, maybe a private party at The Fat Jewish’s house featuring us, Snoop Dogg and Lil’ Dicky, hosted by Will Ferrell and Kristen Wiig…Is that so much to ask?!

Tell us about your mix…
Ava: Sex & Mischief.

Drink(s) of choice…
Ava: Sparkling water, all day. Green Tea. Coffee…lots of it!

Laura: Sparkling water, FOR SURE, with lemon. Martinelli’s sparkling apple cider.  On the alcohol tip, dark red sour beers and ales.  My favorite right now is actually a local SF beer by a company called Almanac.  Their Dogpatch Sour is what’s up.  OK, fine, and tequila!