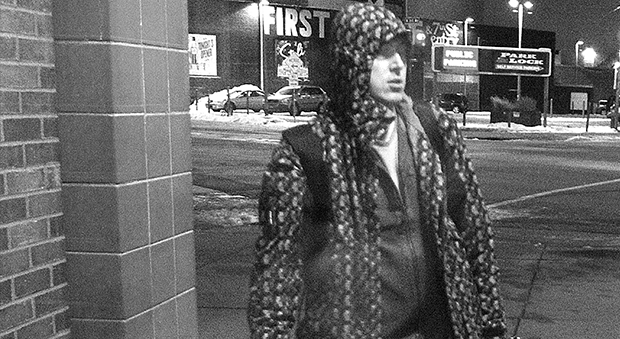 J Matthews has been pushing boundaries with his music selection for nearly 20 years–contributing his sounds, personality and love for music to the underground scene in Minneapolis. As a founding member and resident DJ for one of the Twin Cities’ most recognized dance music events, HotDish, J Matthews has booked and DJed alongside a gang of house music icons; including Derrick Carter, Jesse Saunders, Lady D, Terry Mullan, Justin Long, Stacey Kidd, Chuck Love, Frankie J, Demitri Max and many more.

J Matthews understands the precise recipe for keeping it fresh and funky on the dance floor. We are beyond excited to have him added onto our Hometown Heroes roster. Check out his mix and interview below!

* CLICK HERE if you do not see SoundCloud player.

How did you get into in dance music and Djing? Is there a specific moment of inspiration you can remember?
In the mid 90s I caught on to “electronica.” It was really Happy Hardcore, Techno, Trance and House (ok, some DnB too). I wasn’t a DJ yet, and all my friends thought the music I was listening to was weird. Minneapolis was in the midst of the Midwest rave era, and I would go to shows and got more immersed and inspired about the music. In late ‘98, a buddy encouraged me to start DJing and introduced me to a DJ who sold me some really basic turntables and mixer.

Several months later, after bedroom DJing and practicing, that same DJ told me that he lined up a gig for me at First Avenue Nightclub (infamous venue in the Twin Cities and where Prince filmed “Purple Rain”). They hosted an all ages night called Sunday Night Dance Party that was the biggest night in the Twin Cities).  I nearly shit myself. “No way! I can’t play that yet. Can I?” I thought to myself, but had to take it. I remember driving there with friends, ghost white and scared to death. I jumped up on the turntables around 10pm with about 200 people in front of me. Hands trembling, totally focused on the records and mixer, I never looked up. I played for an hour and when I finally looked up, there was over 1200 people dancing and screaming. That was my first public DJ gig. Walking away from the decks, through the crowd, people were coming up to me left and right saying “Great set” and “That was dope!”, etc. That moment is what inspired me. All the adrenaline, knowing I made people dance, and having control of the floor, was something that to this day still drives me. Not the whole “I’m a big DJ” thing (because I have never really been that) but more of being a guy who helps people forget and just dance and be happy.

Tell us about the scene in Minneapolis. How is it unique and what sets it apart?
I would say that our scene is authentic. We are a big city, but the scene can seem so small. We have big producers like Chuck Love, ESP/Woody McBride, DVS1, Dustin Zahn, Fourfeet, Nate Laurence (hey Nate!), Jeff Swiff, Soundbed, and tons more. Lots of budding producers too that are putting out massive things in all genres and pushing forward great new sound.

We have hundreds of great DJs who give their blood, sweat and tears, to ultimately do it for the love of the music and community. They run around town playing and promoting these nights that could be a dope lounge spot, or a dark sweaty club, to underground warehouse parties that kill it! Oh, you want big room EDM sound? Yeah, we got that ish too!

All of it is really diverse. We have a scene for House, Techno, Drum and Bass, Trance, Trap, Bass House, EDM, and a host of others. I think the fans are really loyal to their music, but love to cross over to the other genre’s parties too. House heads at Techno shows, DnB kids at Techno, Trap kids at Down Tempo parties, etc. It makes for this dynamic community you’d want to be a part of. I’m very proud of Minneapolis and what it’s gone through. It’s grown organically and stayed true to the roots of all genres. You can find everything here that you want to and the scene is humble enough to take you in without question. You don’t have to be in a huge city like NYC, or LA ( sorry

Setting us apart? Hard one to answer, because I don’t want to bash anything going on in other parts of the world, but what I can say is that our scene is constantly growing and people are WAY into it. Dance floors full, great music playing, and for the most part, you can find yourself comfortable anywhere you go. As a promoter for HotDish and having big name talent in from other major cities, I often hear something like “Minneapolis knows how to party” or “You got ‘that’ scene going on which we are struggling to get.”

Who are some of your biggest influences?
Getting started DJing it was the whole Bad Boy Bill / Richard Humpty Vision types. I was really into that disco / jackin / 135bpm vibe. But that was in the late 90s / early 00s when you could do that. I remember a live Carl Cox mix where he is almost train wrecking a mix, like .01 seconds away from “shoes in a dryer”, and I loved it. It was so raw and real. Big props for him releasing that. Locally it was guys like Jack Trash, E Tones, Dorian Baker, DJ Apollo. Regionally, Terry Mullen, Thee-o, Hyperactive, etc.

Any cool projects or events planned for the rest of 2016 and beyond?
Yup!! Just got back from playing at Even Furthur (Drop Bass Network / Communique / David J. Prince). That was SUPER DOPE. It’s been 20 years since they started throwing raves and they had this anniversary party out in “Somewhere, WI” which turned out to be this 3 day wooded mudland adventure in northern WI with somewhere around 3000 people. It was a mess and I swear it was one of the best times I’ve ever had.

Nate Laurence and I are “getting the band back together” with HotDish (hotdishmpls.com) which is a monthly that we had done at First Avenue Nightclub for 5.5 years and then stopped. We took almost two years off and so excited to get it going again. We have a super dope NEW FRESH venue that we feel is the perfect fit for HotDish 2.0.

On top of that, I have been dabbling in production and making tracks. Made a few that I really dig (and lots that I hate) but still not quite there yet in terms of putting something quality out into the world. But soon, I hope. I am a Virgo, so I am super critical of everything I do. But I have great resources here in Minneapolis. So many producers and artist here willing to teach me. If you’re reading this, THANK YOU!

Top 5 tracks in your playlist?
Put me on the spot!
N2Deep (Original Mix) – Lovebirds – N2Deep (I get so lost in this track every time. It’s so good!!)
Jeff Swiff, Soundbed – Steez Bump – Soundbed Dancehall Tool)
La Champagne – Trentemoller
Nate Laurence – Lil Gringo Loco – Pluralistic (Not because he’s my boy, but the song is seriously dope)
Pépé Bradock – Vermeille

What gig do you dream about?
Berghain from 2-4am. Just kidding. I don’t really dream about playing a certain club, venue, or party. For me, it’s about the people and the energy. Give me a full dancefloor of people who want to get down on some house / deep house, and I am game. I just want to be part of that energy and take it up from there.

Tell us about your mix…
So this mix is raw, on two 17 year old Tech 1200s using Traktor and me just straight vibin. My goal was to make this mix unique and original. Great new tunes that I am digging, and also pulling out some of the old tracks I love and hold close to my heart. I hope you enjoy it!

Drink of choice…
DJing: Give me a good IPA, preferably something local
Partying: Jack and Coke