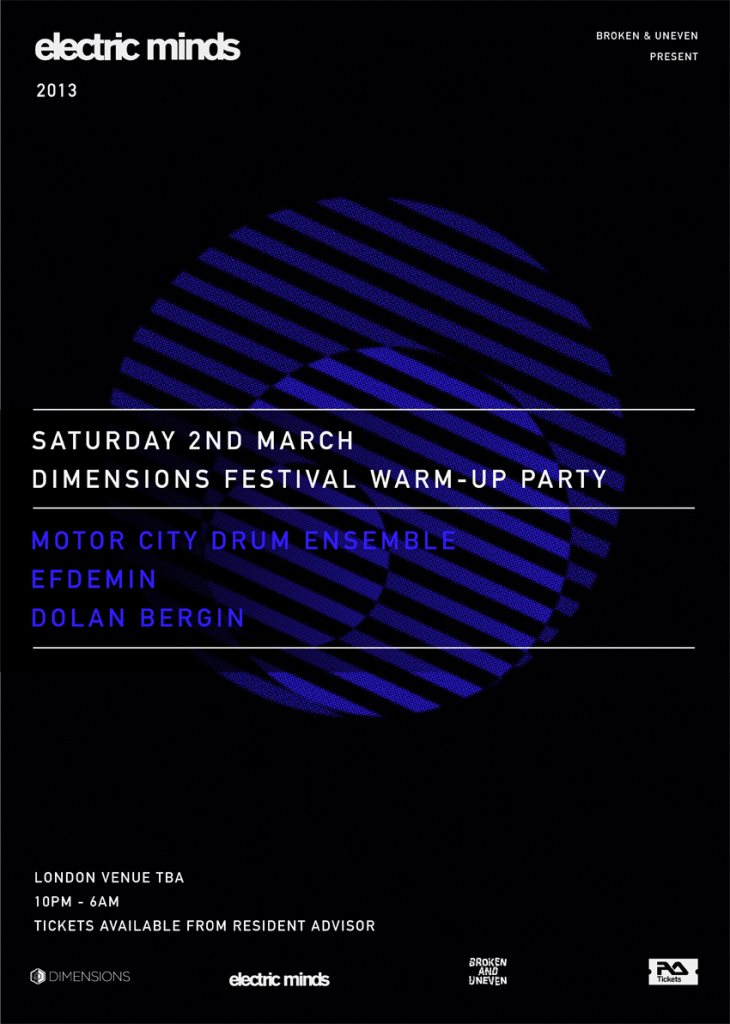 [Party] Choosing a night out in England’s capital is never an easy choice and we wouldn’t have it any other way. For most, the first deliberation for party-goers is who is playing in London. On any given night, the big smoke offers a plethora of choice catering to anyone and everyone in what is arguably one of the world’s most multicultural cities. With so much choice, it is undeniably one of the more difficult places to host a successful night and sustain this success. A select few parties have managed to stand out, creating a following who base their decision not only on who is playing, but also on the party itself. Electric Minds is one party with such exceptional vibes.

On March 2nd the banks of the Thames will be blitzed by two of Germany’s finest: Motor City Drum Ensemble and Efdemin.

Motor City Drum Ensemble is leading the pack in the Detroit-influenced German tech movement at the moment, off the back of his Raw Cuts series which has been built upon by the Stuttgart-based producer through his recent Send a Prayer EP.

MCDE’s insightful and skilful sampling gives his tracks their beautiful originality through ingenious takings – no doubt owing to his vast knowledge of music as a whole. It is this knowledge (and a particular interest in jazz) which makes his live sets so unique. Expect to be dancing to a vocal from the 50s and a saxophone from the 80s within a few short minutes of one another.

Efdemin last graced Electric Minds in May 2012 with his stripped-back, elegant productions. The Hamburg-born DJ has a true passion for music and is known for his extensive personal record collections. However, only the very best make it into his live sets – he’s a tough man to please musically. While Efdemin’s production are effortlessly put together, he retains a sense of analogue edginess which makes for an incredible live sound. Efdemin is sure to be the perfect accompaniment for his fellow countryman at this party.

Celebrating its eighth birthday this October, Electric Minds is the vision of promoter and esteemed jockey in his own right, Dolan Bergin. What Bergin has created is a much revered party packed with soul, tech and deepness which is all too rare at larger events. Bergin forms one half of Broken and Uneven, responsible for ultra-cool The Hydra club with partner Ajay Jayaram.

Expect nothing but excellence at Electric Minds. They haven’t disappointed yet.